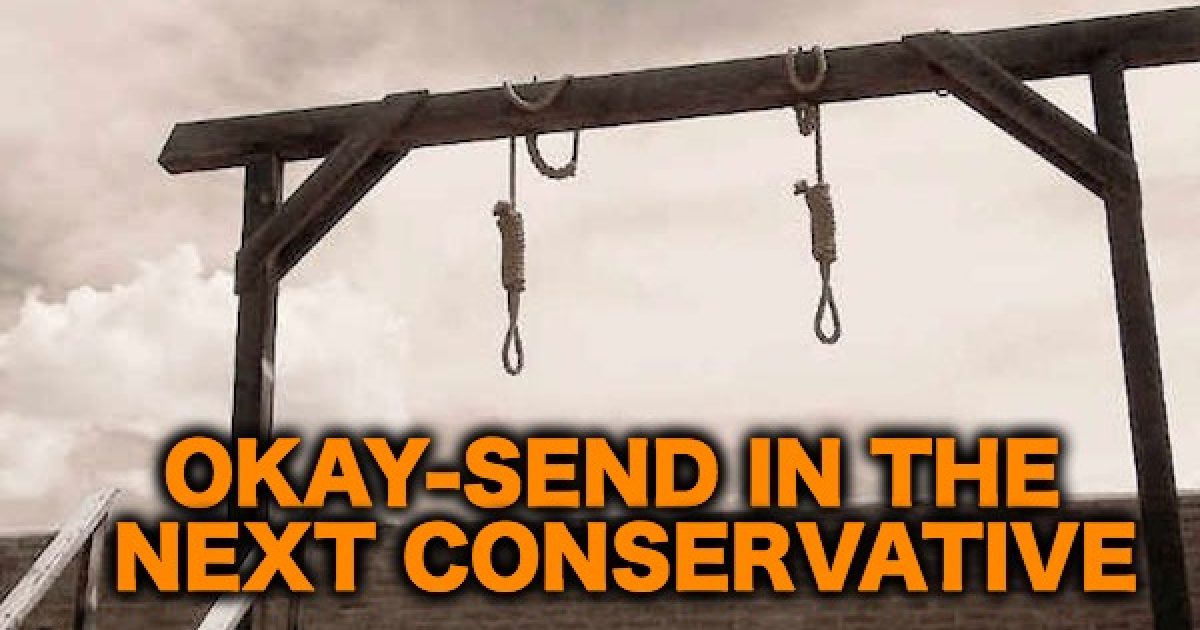 The way things are trending the future will see execution as the penalty for conservative thought.  The evidence is clear the left is ramping up its war on conservative free speech. We’ve already the social media platforms’ censorship of Alex Jones, or NY Governor Cuomo’s attempts to get banks and insurance companies to stop working with the NRA, or even YouTube’s removal of Dennis Prager’s “Prager U” videos.

Visa and Mastercard have blocked service to the David Horowitz Freedom Center because the far left hate group, The Southern Policy Law Center (SPLC) pressured them into believing that the Horowitz Center is a hate group.

The Daily Wire tells us of the SPLC’s actions against Horowitz:

Under pressure from the Southern Poverty Law Center (SPLC), Visa and Mastercard have blocked donations to the conservative think tank David Horowitz Freedom Center (DHFC) after it was labeled a hate group by the militantly left-leaning watchdog organization.

In an email to supporters on Wednesday under the subject “Transaction Denied,” the DHFC announced that at the request of the Southern Poverty Law Center, the two credit card companies will no longer be allowing donations to DHFC.

“We’re under attack by the Southern Poverty Law Center (SPLC),” the email begins. “For years, the SPLC has labeled the Freedom Center a hate group and tried to get organizations like Amazon, Facebook and Twitter to ban us and silence our message.”

“Yesterday, SPLC finally convinced MasterCard and Visa to cut us off. Now we can’t process donations from any major credit card companies.”

Horowitz published a message about the incident to Breitbart News:

It’s cynical, calculated and supported by the Democratic Party. The reason Mastercard and Visa gave us for cutting us off and thus sabotaging our online fund-raising operation is that the SPLC told them that we were a hate group.

It is wrong to focus on the Tech heads as the culprits because as businessmen they have a vested interest in keeping their platforms politically neutral. They have been threatened by Senator Mark Warner and other Democrats if they don’t censor conservatives. The fact that Mastercard and Visa are now part of this juggernaut indicates how dangerous this has become.

The SPLC hasn’t been well-intentioned in a long time. It started as a civil rights organization with good intentions, fighting racists such as the KKK. However, in recent years it has gone crazy.  The SPLC unjustly levels accusations of racism and hate. They branded as “bigoted” many groups and individuals whose only crime lies in their refusal to embrace the SPLC’s left-wing agenda,   including Tea Partiers, The Federation for American Immigration Reform (known as FAIR)  Christian organizations that don’t believe in same-sex marriage or abortions. And of course, they spent most of the recent presidential election cycle attacking the future president Trump as racist. Heck, they even declared the term “Drain The Swamp” as racist which is ridiculous charge unless of course comic character “Swamp Thing” really exists–but he’s green.

Maajid Nawaz is a former Muslim extremist who now spends his time trying to prevent the spread of radical Islam in the West. For his efforts, he was threatened with death by Islamists and slandered as an “Islamophobe” and a hate group by the SPLC. Maajid Sued in June of 2017 and a year later  SPLC settled with $3,375 and a public apology.

In 2015 the SPLC put Dr. Ben Carson on their extremist watch list because he was against same-sex marriage. Now Dr. Carson has been known to separate children from each other, but only if they were born conjoined. They backed down after four months.

Folks this is more than censorship, the left and their affiliated organizations using Stalin-like methods to drive cynically drive conservatives out of business. The David Horowitz Freedom Center is not a hate group!  I wrote for two of their websites, NewsRealBlog and TruthRevolt.org. The editors of both those sites held us to high standards of accuracy and professionalism. The SPLC is an anti-Conservative and anti-Faith hate group.

In a way, I wish it was just SPLC, Richard Spencer, Dennis Prager, Breitbart News, David Horowitz, the National Rifle Association, all of Alex Jones’ offerings, all are being systematically removed from their ability to raise money and continue operations from different attack goons in the leftist world. And that doesn’t even include the fact that Facebook keeps juggling its algorithms with the result of destroying traffic and income to conservative sites.

But don’t you see, the left isn’t trying to disagree with conservative media, they are trying to destroy all conservative. The left is using every illicit method to shut down conservatives from biased tech giants deploying their power to destroy center-right opinion on the Internet, first by hurting our traffic, and now to the whole system of finance being turned against us and used as a weapon to eliminate the freedoms and livelihoods of conservatives.

Liberals are pulling out all the stops and using every weapon to attack us, now. If you are a Republican or a conservative, your very jobs are at stake. Liberals want conservatives to either to conform to their left-wing, un-American policies and ideas or they want us utterly shunned from every area of society.

And in the end, it’s up to you our readers, listeners, viewers, etc., to keep us going. Keep reading, join our mailing lists and if you like a post send the link to your friends and tell them to read the sites and join the mailing lists.  And when politicians like Andrew Cuomo try to put us out of business vote them out. When social media sites censor your favorite websites, tell them how angry you are…YOU are their customers.  And when MasterCard and VISA don’t allow conservative sites to use their product, call the bank that sold you the card and the 800 number on the back of your card. Do not stand for the attacks on conservative websites.  Even the sites who are frothing at the mouth crazy type sites. If we allow them to put people with a different point of view out of business, they will soon be censoring what we say in our own homes.