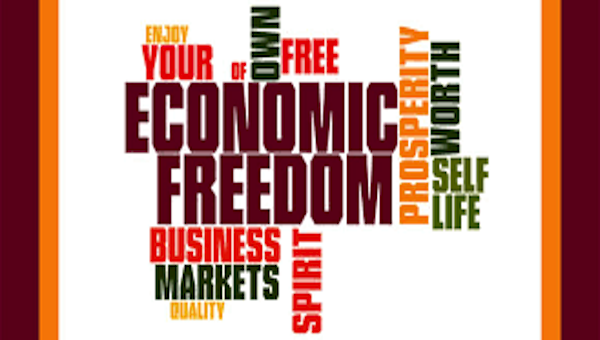 In just one year of Joe Biden’s presidency, America’s economic freedom index has fallen to its lowest point ever in the survey’s history.

In its annual survey, the Heritage Foundation reports that the U.S. has fallen 2.7 points to an all-time low score of 72.1 and has hit its lowest rank globally of 25th place among nations with the freest economies. The 25th ranking is down from ranking 20th a year ago. Despite the drop in economic freedom, “the Biden administration is still barreling full steam ahead to implement a socialist agenda that would add trillions to the debt, hike taxes, and centralize more federal power over the economy.”

The survey, launched by the Heritage Foundation in 1995, scores countries based on government size, regulatory efficiency, and open markets.

“This year’s Index of Economic Freedom paints a disturbing picture, both at home and abroad,” Heritage President Kevin Roberts said according to Fox Business,  “The decline of American economic freedom is serious cause for alarm and has real and tangible consequences for all Americans, especially low-income families and the working class.

Roberts noted that Biden’s response to the pandemic and supply chain crises and the highest inflation rate in 40 years, along with an 11-year low in consumer confidence, all contributed to the troubles for the U.S. economy. And that isn’t to even mention a national debt that has surpassed $30 trillion.

“The lives and livelihoods of hundreds of millions of people have been deeply disrupted, not just by the virus, but especially by draconian lockdowns, intrusive public health mandates, and restrictions on commerce and trade,” Roberts said. “Trillions of dollars in new federal spending have further weakened our economy and caused a historic spike in inflation.”

The Heritage explained why the U.S. freedom score dropped:

“The United States has one of the world’s wealthiest and most diversified economies, led by a highly productive services sector, advanced manufacturing, and world-class research and development. The 2020 pandemic throttled relatively solid economic growth that had been stimulated by tax cuts and a lightened regulatory burden. Unfortunately, unchecked deficit spending and unprecedentedly accommodative monetary policy not only continued but also accelerated in 2020 and 2021. Meanwhile, racial tensions and bitter political polarization aggravated by the pandemic have deepened, especially since the 2020 presidential election. Since assuming office in 2021 with narrow control of both houses of Congress, President Joseph Biden has pursued a radical left agenda aimed at fundamentally transforming both the country and the economy”

Not surprising at all. The question is will the GOP take over Congress in the midterm elections only ten months away? Until the socialist-leaning leftists are out of office, don’t expect our economy to become free again.

Parts of this post were first seen at iPatriot.com.