‘East Jerusalem’ And The UN/UNHCR ‘Blacklist’ 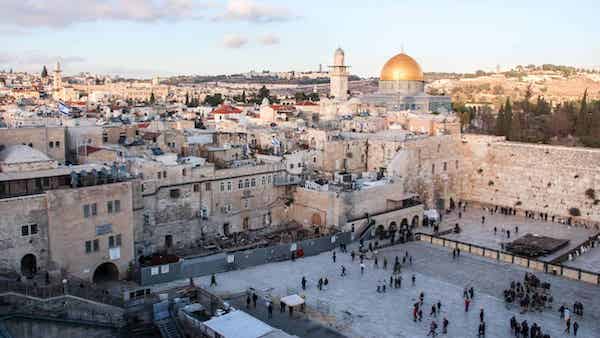 The UN has earned all of the ire it has received from the likes of Secretary State Mike Pompeo, former ambassador Nikki Haley, and others over the Human Rights Council’s anti-Israel “blacklist” of 112 companies operating in Judea and Samaria. And yet, one of the UN’s offenses here has been missed by its critics. The UN has labeled Jewish neighborhoods in Jerusalem as settlements. According to the UN, the boycott “database” is made up of “business enterprises involved in … Israeli settlements in the Occupied Palestinian Territory, including East Jerusalem.”

So, just what is “East Jerusalem” and why is adding the word “East” to describe part of Judaism’s holiest city and Israel’s capital of any serious magnitude?

East and West in Israel are not simple geographic terms as they are in America. In Israel, where Judea and Samaria have been labeled by opponents as the West Bank, things are different. The term “West Bank” was created by Arab propagandists to de-emphasize the area’s inherent Jewishness, and to disassociate the land from the State of Israel. East Jerusalem was similarly invented.

What is “East Jerusalem”?

In the Torah and in the Christian Bible, in every single instance when a specific location in Jerusalem is mentioned, it refers to an area that the UN is labeling “occupied.” The term “East Jerusalem” cannot be found in the King James Version. And that is because “East Jerusalem” is a very modern distortion.

According to a June 2007 United Nations agency report: “East Jerusalem is defined as the part of the city that is east of the 1949 Armistice line (green line). There is no clear delineation of how far east the city extends as the municipal boundary line established by Israel after the 1967 war is not recognized by the international community (UNSC Resolution 242 and 267), nor was the formal annexation of the city by Israel in the 1980s (UNSC Resolution 476 and 478). For practical purposes, however, within this report, East Jerusalem refers to the part of the city between the green line and the Israeli declared municipal boundaries.”

So, “East Jerusalem” is Jerusalem’s Old City and its surrounding neighborhoods. The original and the oldest parts of Jerusalem are in this “East Jerusalem,” according to the UN.

When anti-Israel extremists created the term “East Jerusalem” out of thin air, it was for one reason. They wanted to rip Israel’s capital apart in order to defeat Israel. This effort tragically gained full force with the Oslo Accords.

The very name Jerusalem means city of peace, city of completeness, and city of perfection in Hebrew. A Jerusalem that is not complete is just not Jerusalem. It’s really that simple.

The United States can do much to confront the UN on Jerusalem. The late Senator Jesse Helms wrote in 1996 that “Israel is the only nation in the world denied the right to choose its own capital. This second class citizenship among nations must end.”

“For Zion’s sake I am not silent, and for Jerusalem’s sake I do not rest,” relates the Prophet in Isaiah 62:1. For Jerusalem’s sake, contact your senator today and demand that the Senate stand in opposition to the UN’s anti-Israel, anti-Jerusalem blacklist and boycott.

Moshe Phillips is the national director of Herut North America’s US division and a candidate on the Herut slate in the 2020 World Zionist Congress’s US elections. Herut is an international movement for Zionist pride and education and is dedicated to the ideals of pre-World War II Zionist leader Ze’ev Jabotinsky. Herut’s website is https://herutna.org/.

The UN’s anti-Israel bias, ensuring that Jerusalem remains undivided, and the growing menace of anti-Semitism in the world are just a few of the reasons I decided to run on the Herut Slate for the World Zionist Congress (WZC) The WZC is sometimes known as the “” Parliament of the Jewish People.”

What first impressed me about Herut was when a rash of horrible anti-Semitic incidents struck the New York City area they immediately created a Synagogue Security Kit which they offered free to congregations across America. While others complained about anti-Semitism, Herut acted by teaching Jews how to protect themselves.