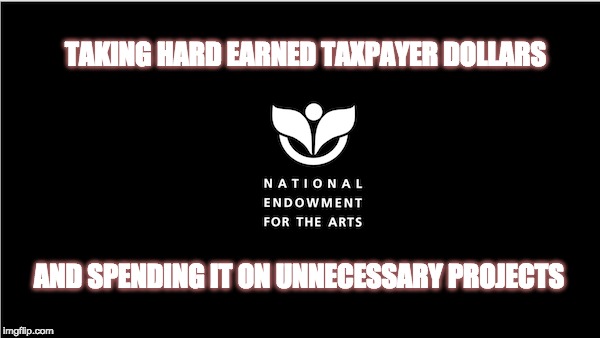 In 2016 the NEA gave Iran their own U.S. taxpayer-funded art exhibit through a $30,000 grant to fund a three-month exhibit in New York called “Global/Local 1960-2015: Six Artists from Iran,” a $60,000 grant to a group in California to set up sound booths in Los Angeles for immigrants, mainly from Central and South America, to record their family histories, a $100,000 grant for the Desert Botanical Garden in Phoenix (outside its mission), and my personal favorite an all male version of a Shakespeare play about a man trying to dominate a strong independent woman, “The Taming of the Shrew.” Some of these expenditures might be fine for a country with very little debt. But as the United States debt is over $20 trillion dollars, these kind of projects are too rich for our blood. That’s why my friend Tami Jackson is celebrating the Trump proposed budget.

Most Americans, if they have half a brain, understand that government is intended to perform some necessary functions (think national security), but overall spends entirely too much money on horrible studies and abysmal organizations.

For instance, the National Endowment for the Arts.

Arts are a good thing, a creative thing. God created: just look at the world and the splendor that is nature. God created man in His image, which means, in part, we are created to create. It’s how we’re wired. Some people paint. Some sculpt. Others write or play or sing music that grips the heart and emotion.

So where does the National Endowment of the Arts go awry?

Art, in the mind of a conservative or Christian, is that creation which uplifts the spirit, which conveys emotion that touches the soul (the seat of the emotions).

But to the NEA?

The NEA seems to qualify any cotton-pickin’ creation as art, not only even if it is exceedingly offensive — but ESPECIALLY if it is offensive. Case in point: “Piss Christ,” the blasphemous display of a crucifix submerged in urine. Yes. The NEA sponsored that. Taxpayer money sponsored a display which was completely an anathema to a huge percent of the population.

The National Endowment for the Arts was begun by an act of the 89th Congress in 1965.

Another government waste of taxpayer money, though perhaps loftier at times (anything would be loftier than that hell-inspired display) — the Corporation for Public Broadcasting.

How is it in a nation built on the economic foundation of the free market we allowed for televised and radio broadcast shows on the taxpayers’ dime?

The CPB motto, “A Private Corporation Funded by the American People.” Very cute that. Sorry CPB — a private corporation should be private. Sink or swim on the entity’s own merits. That’s why most talk radio is conservative: no one wants to listen to bitter, whiny rants for three hours a day.

We have the 90th Congress to thank for this money sinkhole.

CPB is a private, nonprofit corporation created by Congress in the Public Broadcasting Act of 1967.

And the Corporation for Public Broadcasting mission? (emphasis mine)

CPB strives to support diverse programs and services that inform, educate, enlighten and enrich the public. Through grants, CPB encourages the development of content that addresses the needs of underserved audiences, especially children and minorities. CPB also funds multiple digital platforms used by thousands of public media producers and production companies throughout the country.

Good old diversity and enlightenment. Just what The Founders intended as they penned our brilliant U.S. Constitution and Declaration of Independence.

No…that’s wrong. The Constitution was a bridle intended to steer and rein in government.

So the 60’s was a time to not only “Turn on, tune in, drop out,” as popularized by psychedelic drug aficionado, Psychologist Timothy Leary, it was also a time to dream up unnecessary agencies that would insult and indoctrinate Americans, all on the taxpayer tab. Perhaps the 89th and 90th Congress members were part of Mr. Leary’s experiments?

And now, after decades of dreaming the grand pipe dream that someday, somehow, a sitting U.S. President would have the wisdom and the spine to say “ENOUGH! No more spending the taxpayers’ hard earned money on either unnecessary or repugnant programs!” — the dream may be coming true!

Today, I cheered as newly sworn in Director of  the Office of Management and Budget, John Michael “Mick” Mulvaney, held a press conference and said some words I thought I would never hear.