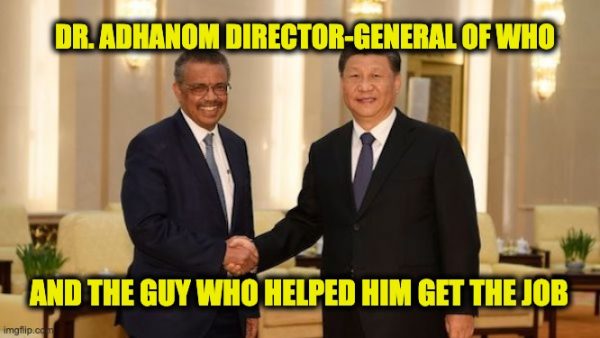 The Director-General of the World Health Organization(WHO) is facing calls to resign over the bungled response to COVID-19. But who exactly is the doctor leading the WHO? Dr. Tedros Adhanom Ghebreyesus has a background that raises a lot of questions.

There are some disturbing things about the 55-year old who was selected for the top job at the WHO in May 2017 that seem to have been skipped by the Media(D).

The more mundane facts about Dr. Tedros are that he was born in 1965 in Asmara, which was part of Ethiopia at the time but is now in Eritrea. He is married and has five children. When he was a child himself, he watched as his younger brother die from what he believes to have been the measles. The preventable death of his brother is what he says spurred him to work on health and health policy.

1. He Is Not Actually A Medical Doctor

Dr. Tedros is the first African Director-General to be appointed to the WHO, and the first in its 72-year history to not be a medical doctor. He has never practiced as a medical doctor. His doctorate degree is in philosophy in community health and he holds a master of science in the immunology of infectious diseases.

Dr Tedros left Ethiopia and came to the UK where he studied at the London School of Hygiene & Tropical Medicine, graduating with Masters of Science in Immunology of Infectious Diseases in 1992.

He then went on to study at the University of Nottingham, where he received a PhD in community health in 2000.

2. He Is A Far-Left Politician Who Was Part Of A Brutal Regime

During his bid for the $260,000 a year job as the head of the WHO, Dr. Tedros was serving as Ethiopia’s health minister and had served as foreign minister.

He vowed to make universal healthcare his central priority if he managed to become the World Health Organization’s Director-General. Dr. Tedros hired a public relations firm to help him clinch the top job at the WHO.

In the mid-1980s, Dr. Tedros graduated from university and went to work for a Marxist dictator as Health Minister.

Later, after the dictatorship was overthrown, he joined the Tigray People’s Liberation Front, which was listed as a terrorist organization by the U.S. government in the 1990s.

He graduated from university in Ethiopia in 1986 with a degree in biology and went to work as a health official in the regime of Marxist dictator Mengistu Haile Mariam, while the country was ruled by the Derg military junta.

According to the BBC, Dr Tedros then joined the hard-left TPLF – which started life as a Communist party and played a major role in overthrowing Mariam in 1991. It later became part of the EPRDF, a coalition of left-wing parties that ruled Ethiopia until last year.

In 2010, Dr. Tedros served as the Number 3 in executive leadership in the Ethiopian Peoples’ Revolutionary Democratic Front. During the election that year, the EPRDF won all but 1 of the 547 seats in the legislature.

As foreign minister from 2012 and 2016, Tedros became the face of a government that human rights groups accused of systematic torture, disappearances and repression of the media and civil society. In Ethiopia’s controversial 2015 general elections, Tedros’ ruling EPRDF declared that it won all 547 seats of legislature amid reports of continued repression.

In 2016, while Dr. Tedros was the Foreign Minister, he got into a public fight with Human Rights Watch for reporting on the EPRDF’s brutal attacks on their own citizens.

3. He Has Exhibited Very Poor Judgment

That has been made very clear in the way that the WHO has bungled the COVID-19 response and continues to cover for China and push Chinese propaganda.

In October 2017, Dr. Tedros tried to appoint Robert Mugabe as a “goodwill ambassador” for the WHO–which should tell you all that you need to know. He’s apparently not a great judge of character and is completely tone-deaf.

…Mugabe, 93, one of the longest serving leaders in the world, seems a particularly unusual appointment for goodwill ambassador,  given his high profile as the leader of a government with a poor record of democratic freedoms.

Critics were particularly offended at the idea that Mugabe was appointed because of his contributions to public health given the collapse of Zimbabwe’s healthcare system under his watch, along with the country’s economy in recent years.  Mugabe, along with several others African leaders, has long trips abroad for medical treatment.

The Times UK reported that the appointment of Mugabe as goodwill ambassador was to appease China, a long-time supporter of Mugabe, for using its influence to have Dr. Tedros elected Director-General.

The Times also notes, “China has praised the authoritarian development model of Ethiopia’s regime, which rules under emergency powers and has put down pro-democracy protests.”

Which brings us to…

While Dr. Tedros was Foreign Minister, he managed to assist in the negotiation to boost U.N. funding to Ethiopia as part of the Addis Ababa Action Agenda. United Nations funding records show that Ethiopia received millions of dollars in funding–including from China who had previously contributed very little to the country.

In 2015 and 2016 China gave some $16million to Ethiopia in spending commitments and cash contributions, largely in support of food or refugee programmes.

In 2011, just before Dr Tedros took up the role, and in 2017, just after he left, China handed over another $44million in commitments and contributions.

At the time of Dr. Tedros’s appointment to the WHO, Frida Ghitis of the Washington Post noted that China “worked tirelessly behind the scenes to help Tedros defeat the United Kingdom candidate for the WHO job, David Nabarro. Tedros’s victory was also a victory for Beijing, whose leader Xi Jinping has made public his goal of flexing China’s muscle in the world.” (Emphasis added)

He is accused of covering up several cholera epidemics in Ethiopia while he was Health Minister.

According to the BBC, while he was Health Minister, “his ministry was known to discourage journalists from reporting about suspected cholera cases in the country.”

During the 2017 election itself, several groups within Ethiopia opposed Dr Tedros’s appointment due to his links with the TPLF and allegations that they stifled journalists and repressed minorities.

Dr Tedros was also accused of covering up three separate cholera outbreaks in 2006, 2008 and 2011 by mis-reporting it as ‘watery diarrhea’, allegations he dismissed as a ‘smear campaign’ by his British rival.

In one scathing Letter to the Editor of the Addis Standard, a Ph.D. candidate wrote:

Dr. Tedros left the Ethiopian health sector very much politicized and crippled, which has to be yet depoliticized if it has to function properly. The more than 35,000 female health extension workers trained for six months and deployed across Ethiopia during his tenure, which many praise him for, are more of political cadres who are deployed in rural household families to serve the TPLF than helping health workers. This has been verified by their own internal memos and reports on various occasions.

An article in Madote describes the conditions that doctors were working in Ethiopia under Dr. Tedros’s term as Health Minister–no access to water for handwashing, and delivering babies at night using flashlights from a smartphone were particularly jarring examples cited.

Even though he was a political appointee with no experience in health care, Dr.Tedros was lucky to have the international community pouring millions of dollars of donation to support the Ethiopian health care system from the AIDS and Malaria crises that engulfed the nation in the mid-90s.

Thousands of primary health care centers were built all over Ethiopia, and Addis Ababa particularly. Most of these buildings were built by contactors owned by the political party that Dr. Adhanom was representing. I will not go into the details of how these substandard two and three floor buildings were built to show how the government was investing in health care. The devil is in the detail. As a young health care practitioner with ambition to help the public, I was enthusiastic to give my best knowledge in to practice. The two-story building that housed about 25 health care providers, has no the bare necessities a health care office should have. In the very small room I was assigned to see patients, consumable health care items such as sterile gloves, paper exam gowns and covers for exam tables, cotton swabs, gauze, tongue depressors, alcohol prep pads, sample containers, chemical test strips, suturing equipment, syringes, disposable instruments, stethoscope, water sink, and restroom supplies were non-existent. This is a fact in most health care centers in Ethiopia.

Yes, this is the legacy of the man that has been running interference for China regarding the Wuhan coronavirus.

Rebel Media’s Keean Bexte covered lots of this and some more interesting tidbits in the following video.

That John Martin quote cited by Bexte really does sum it all up:

In a sane world, instead of leading a global organisation, Tedros and his cronies would be put on trial at the International Criminal Court, tried for his crimes, and if found guilty, should spend the rest of his life in prison.