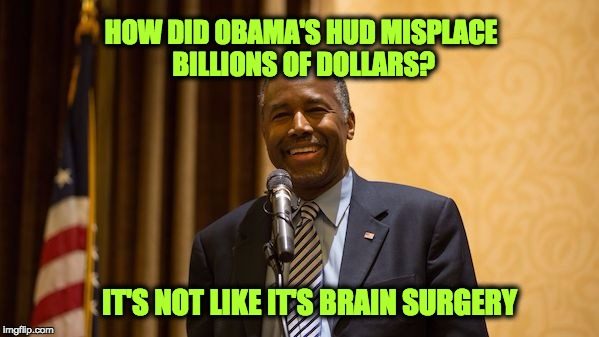 Remember this from Senate Minority Leader Chuck Schumer regarding Dr. Ben Carson’s confirmation as the next HUD secretary?

“I have serious concerns about Dr. Carson’s lack of expertise and experience in dealing with housing issues. Someone who is as anti-government as him is a strange fit for Housing secretary, to say the least,” Schumer said in a statement.

Sen. Sherrod Brown (D-Ohio), the top Democrat on the Senate’s Banking, Housing and Urban Affairs Committee, said the country “cannot afford a HUD Secretary whose spokesperson said he doesn’t believe he’s up for the job.”

When Dr. Ben Carson was being confirmed just about every Democrat who spoke publicly about his confirmation made a point to criticize, belittle, and demean him and President Trump for choosing him. However, it wasn’t Dr. Carson they should have been worried about, because HUD was already being run poorly by the Democrats chosen leaders. In a recent and wholly shocking report from the Daily Caller we learned that HUD’s financial situation had been so totally mismanaged that it was impossible for the Inspector General (IG) to actually figure out what happened to the agency’s money.

Department of Housing and Urban Development’s (HUD’s) financial books are in such bad shape that HUD’s Inspector General (IG) can’t complete an audit even after HUD officials corrected $520 billion in bookkeeping errors, according to a new IG report.

These same problems have been reported for three straight years by the IG.

Here’s what the IG found:

The total amounts of errors corrected in HUD’s notes and consolidated financial statements were $516.4 billion and $3.4 billion, respectively. There were several other unresolved audit matters, which restricted our ability to obtain sufficient, appropriate evidence to express an opinion. These unresolved audit matters relate to (1) the Office of General Counsel’s refusal to sign the management representation letter, (2) HUD’s improper use of cumulative and first-in, first-out budgetary accounting methods of disbursing community planning and development program funds, (3) the $4.2 billion in nonpooled loan assets from Ginnie Mae’s stand-alone financial statements that we could not audit due to inadequate support, (4) the improper accounting for certain HUD assets and liabilities, and (5) material differences between HUD’s subledger and general ledger accounts. This audit report contains 11 material weaknesses, 7 significant deficiencies, and 5 instances of noncompliance with applicable laws and regulations.

Sadly, even after allowing HUD to work on their problematic ledgers, the IG still hasn’t been able to resolve all of the problems with their books. This means that Dr. Carson first task isn’t to get about the business of helping the people HUD is meant to help, no, his first task is going to be solving the problems created by Democrat mismanagement.

Interestingly enough, the man who couldn’t figure out how to balance the books at a minor agency like HUD is actually a rising star in the Democrat Party and someone Democrats hope will one day lead their party. His name is Julian Castro, and one wonders… if he couldn’t handle properly running HUD how could Democrats hope he does better on a larger scale? It’s preposterous.

But have no fear Dr. Ben Carson will straighten it out.  After all, its not brain surgery.