Don’t Look Now, But Here Comes Another Recession Or Worse

Ladies and Gentleman, here we go again.  The violence in Libya continues, and as the battle wages on the price of oil continues to spike up.  According to Lazard Capital Markets, that spike is very reminiscent of the spike we saw in 2008, which contributed to the recession we are still trying to dig out of.

Oil prices likely to go higher but entering demand destruction range; time to get more cautious. In contrast to the 2008 superspike, where oil prices spiked on runaway emerging market demand, the latest spike has been driven by supply issues as Middle East instability worsens. With unrest spreading from Egypt to Libya and Oman (and concern over possible unrest in Saudi Arabia), we believe oil prices could go significantly higher from current levels. Our price elasticity models indicate oil prices could spike to $160+/Bbl if we lost all Libyan production and one half of Saudi production.

That said, we are near levels where the market begins to worry about negative impacts on the economy (~ 5% of global GDP), which we believe warrants a more selective investment stance based on our analysis of the prior oil price spike cycle in 2008.

Since this scenario is somewhat different, being based not on demand but on supply, it is unsure whether or not it will have the same impact. But if you’re looking at the oil price just in terms of GDP, we’re nearing the point where things could turn ugly. 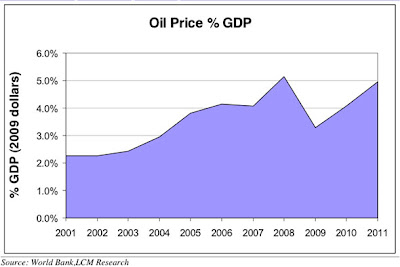 It is true that this particular oil spike may be different than the one in 2008, but don’t forget that  every rescission we have had since the mid-1970s has shown an accompanying spike in oil prices.

Curiously, an over-500% increase in the real price of oil gets virtually ignored as a culprit behind today’s economy, eclipsed by the ongoing crisis in financial markets. Yet the run-up in real oil prices this cycle is over twice the spike in oil prices that occurred during the first or second OPEC oil shock. And those oil shocks produced two of the deepest recessions in the entire post-war period, including the 1980-82 double dip.

The price of oil influences more than just how you heat your house or drive your car.  Since most manufacturing uses oil in at least some of their manufacturing process, even if it just to get product to the market. Basic food items are already in an inflationary period, should it last this oil spike will make it worse. What may end up being similar to 2008 is that people will have to choice between bank payments and basic staple items whose costs were driven up by their energy costs.

So what is the Obama administration doing to retard the increase in costs?  Tapping the strategic oil reserves. The supply of oil the country keeps in the event of a real emergency.

“We are looking at the options. The issue of the reserves is one we are considering,” Obama’s chief of staff, Bill Daley, said yesterday on NBC’s “Meet the Press.”

Taking oil out of our “rainy day” supply will have a temporary downward effect, but it wont keep prices down.
.

The only way to help is to start drilling for oil today! Yes it is true that it will take years to reap the oil new wells, but remember what happened in 2008 when President Bush lifted the presidential embargo. Crude Oil prices peaked during the summer of 2008 as it hit $145 in July 2008. Prices began to fall immediately after President Bush lifted the executive ban on offshore oil drilling on July 14th. By the end of December 2008,  crude oil spot price fell to $30.28 a barrel. Its interesting that just the threat of new drilling drove down costs.
All this is happening while the United States sits on a major supply of oil. A 2009 study by the non partisan Congressional Research Service (CRS) sheds light on America’s energy resources. It shows show the U.S. supply of recoverable oil to be 167 billion barrels of oil, the equivalent of replacing America’s current imports from OPEC countries for more than 75 years.

Sadly, the progressives in Congress and the White House, refuse to open up our reserves to drilling–in fact we have gone backwards. One of the Obama administration’s first moves was to cancel contracts to exploit our shale oil reserves:

Interior Secretary Ken Salazar has canceled leases for energy exploration on 77 parcels of federal land in Utah, confirming that this White House is indeed a Small Oil administration.

The previous administration, which was not beholden to environmental special interests and seemed to understand the importance of energy, had released 130,000 acres of largely uninhabited — and uninhabitable — land for oil and gas exploration.

Some of the parcels are in or near the Green River Formation, an oil-rich region in Colorado, Utah and Wyoming that has the largest known oil shale deposits in the world, holding from 1.5 trillion to 1.8 trillion barrels of crude.

The over reaction to the BP oil spill, a hiatus of all offshore drilling, and the follow-up rules changes represents another retreat from exploiting our own natural resources. Only one oil contract has been awarded since the President lifted the hiatus that resulted from the BP disaster.

As the United States continues to struggle through a weak, jobless recovery we are approaching the next economic crisis caused by higher oil prices, a crises whose start date has been moved forward due to the unrest in many of the Arab Middle East countries. Our President continues to put roadblocks in front of the only solution to our on going oil crises, drilling for the oil we have.

The GOP Will SWEEP 2022: Here’s PROOF
The Black Sphere

Gubernatorial Polling Update: Can Anyone Stop DeSantis?
The Floridian

How Close is Iran to a Nuclear Bomb? Reports: Days Away
Conservative Firing Line

Crist Agrees with Biden to Lift Cuban Restrictions
The Floridian