Dems Are Scared: Pelosi Begs Biden Not to Debate Or ‘Legitimize’ President Trump 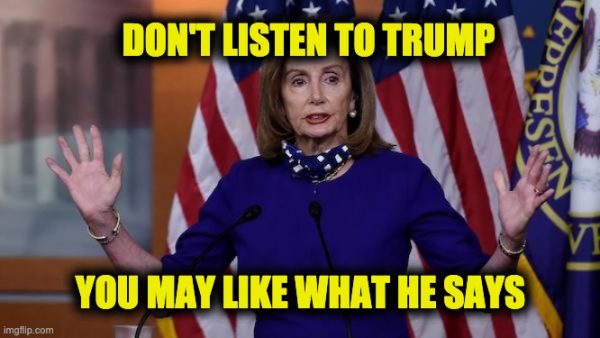 After three nights, the Republican convention has gotten high marks. But it must be moving the needle toward President Trump even more than observers realize. At her usual Thursday press conference, Speaker Pelosi came blurted out that Biden shouldn’t debate the POTUS:

“Don’t tell anybody who told you this — especially don’t tell Joe Biden — I don’t think that there should be any debates,” she said. “I do not think that the president of the United States has comported himself in a way that anybody has any association with truth, evidence, data and facts. I wouldn’t legitimize a conversation with him, nor a debate in terms of the presidency of the United States.”

The only way she would come out with that statement is she sees polls indicating voters are moving toward Trump and/or has no confidence that Biden would perform well in a debate with the President.

Pelosi’s comment was a continuation of what the Democrats and their media sycophants have been trying to prove since he was elected—that Donald Trump is not legitimate.  First, it was the Russia hoax, then it was the Ukraine hoax, in between there were smatterings that Trump is a bigot, and everything he says is a lie.  Most recently, it was the Trump screwed up the China Virus response lie. All of it designed to delegitimize a duly elected president.

The Democrats are afraid, not because of any of their fake attacks, but because Trump has been a good President who has done everything he promised, and the American people are beginning to listen. But Pelosi and the Democrats don’t want the people to listen–the RNC message is compelling. The RNC speakers aren’t calling Biden and the American people names, as did the DNC speakers. Instead, the Republican speakers are reminding Americans what Trump has achieved and wants to do next. Instead of calling Biden names, they are comparing Trump’s achievements to what Biden has done, said, or proposes.

If Democrats are terrified of the gaffe stricken and possibly dementia-stricken, Joe Biden making a fool of himself during a debate with President they should’ve pushed for a better candidate. If they’re terrified of President Trump looking good and reminding Americans of hos many achievements in the Oval Office while debating Joe Biden–well tough sh*t! The Republicans did pick a better candidate.