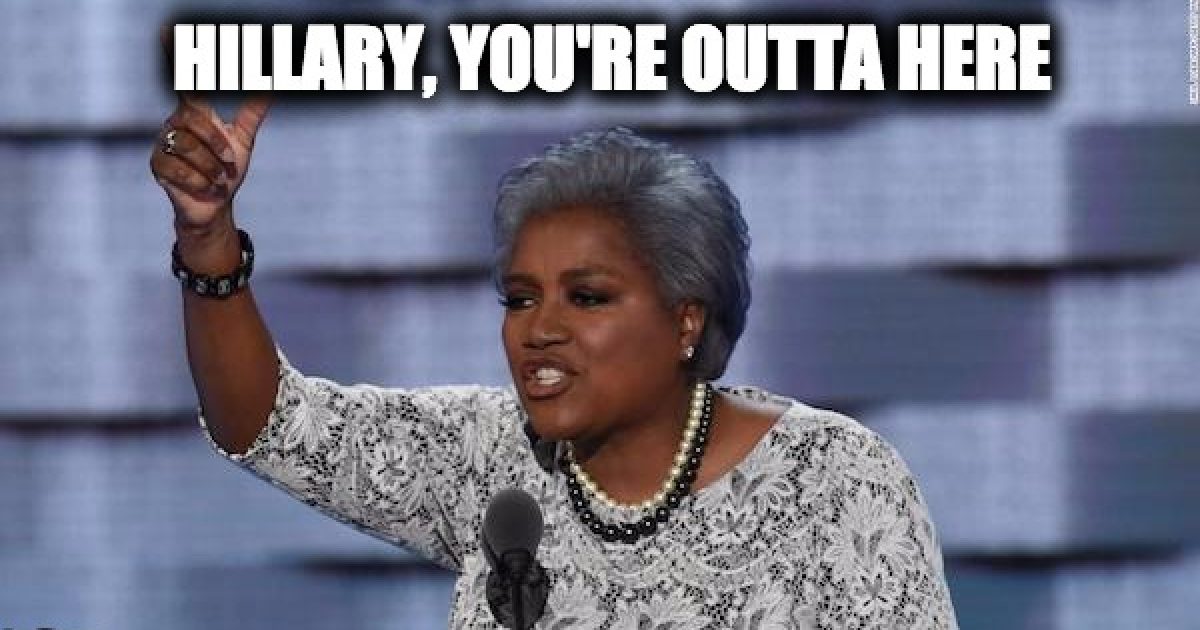 The battle between former interim DNC Chair Donna Brazile and the Clinton camp that began with the publication of an excerpt from her new book accelerated on Saturday with Donna Brazile’s revelation that she considered removing Clinton as the Democratic Party’s nominee.

According to Philip Rucker of the Washington Post who obtained an early copy of the book, after her 9/11 fainting episode, Brazile considered replacing Clinton and Virginia Sen. Tim Kaine, with then-Vice President Joe Biden and Sen. Cory Booker (D-N.J.).

Brazile writes that she considered a dozen combinations to replace the nominees and settled on Biden and Sen. Cory Booker (N.J.), the duo she felt most certain would win over enough working-class voters to defeat Republican Donald Trump. But then, she writes, “I thought of Hillary, and all the women in the country who were so proud of and excited about her. I could not do this to them.”

Brazile also accused Team Clinton of mistreating her, she told them they were treating her like a slave.

“I’m not Patsey the slave,” Brazile recalls telling them, a reference to the character played by Lupita Nyong’o in the film, “12 Years a Slave.” “Y’all keep whipping me and whipping me and you never give me any money or any way to do my damn job. I am not going to be your whipping girl!”

Apparently, Brazile had also used the possibility of replacing Hillary as a threat to reign-in the Clinton team:

Whenever Brazile got frustrated with Clinton’s aides, she writes, she would remind them that the DNC charter empowered her to initiate the replacement of the nominee. If a nominee became disabled, she explains, the party chair would oversee a complicated process of filling the vacancy that would include a meeting of the full DNC.

After Clinton’s fainting spell, some Democratic insiders were abuzz with talk of replacing her — and Brazile says she was giving it considerable thought.

The morning of Sept. 12, Brazile got a call from Biden’s chief of staff saying the vice president wanted to speak with her. She recalls thinking, “Gee, I wonder what he wanted to talk to me about?” Jeff Weaver, campaign manager for Sen. Bernie Sanders (I-Vt.), called, too, to set up a call with his boss, and former Maryland governor Martin O’Malley sent her an email.

Brazile also was paid a surprise visit in her DNC office by [ senior Hillary staffer Charlie] Baker, who, she writes, was dispatched by the Clinton campaign “to make sure that Donna didn’t do anything crazy.”

“Again and again I thought about Joe Biden,” Brazile writes. But, she adds, “No matter my doubts and my fears about the election and Hillary as a candidate, I could not make good on that threat to replace her.”

Team Clinton responded to the latest Brazile changes with an open letter signed by 120 Hillary campaign staffers. Their response was built around the Democratic Party’s favorite words; Russia, Russia, Russia!

We were shocked to learn the news that Donna Brazile actively considered overturning the will of the Democratic voters by attempting to replace Hillary Clinton and Tim Kaine as the Democratic Presidential and Vice Presidential nominees. It is particularly troubling and puzzling that she would seemingly buy into false Russian-fueled propaganda, spread by both the Russians and our opponent, about our candidate’s health.

In the Politico excerpt released Thursday,  Brazile wrote that Clinton basically “fixed” the nomination by exploiting a joint-fundraising agreement and controlling almost every action of the national party during the primary season.

Donna Brazile’s book, titled Hacks is due to be released in two days on November 7th. Look for the battle between the former DNC chair and the Clinton campaign to accelerate once the book is released and more revelations become public. Allow me to suggest this is time to purchase the large bag of popcorn.

Update: Brazile was a guest on ABC’s This Week With A Former Clinton Operative, and had a word for her critics, “Go To Hell!”