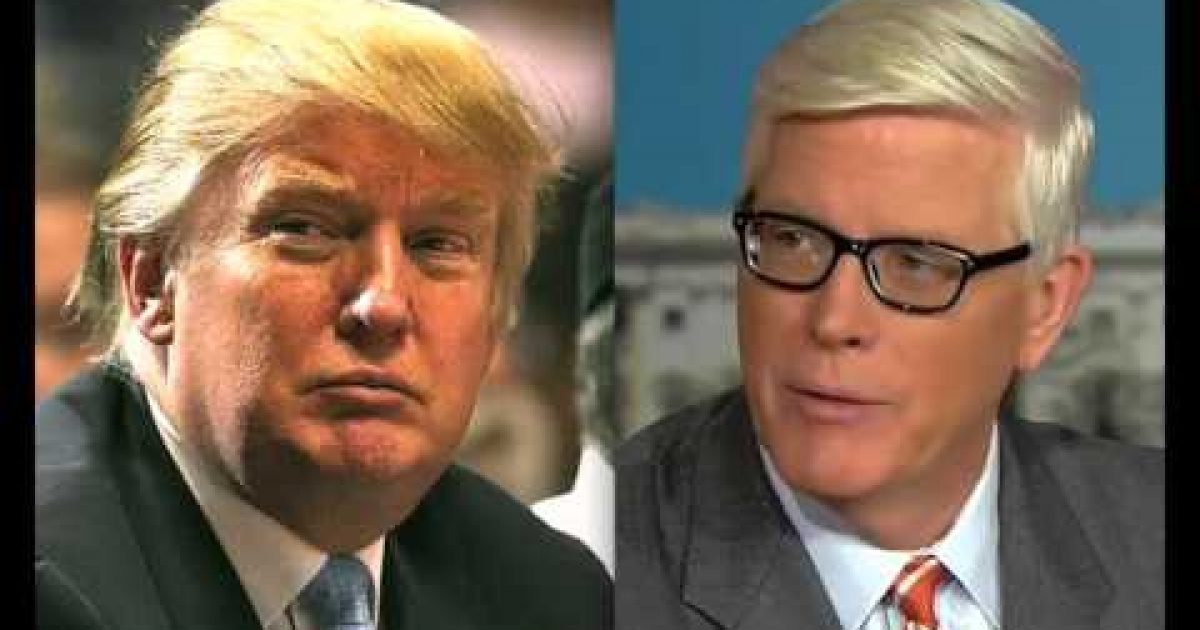 Hugh Hewitt began his Thursday evening program with an interview of the always entertaining GOP Presidential Candidate Donald Trump. After a few questions about Trump’s upcoming Saturday Night Live appearance, the two hunkered down into a discussion about the UC Merced stabbing, national security and defense spending. Interestingly Trump brought up a selling point I had never heard him make before, his claim of superior negotiation skills will help the federal government get much more out of the defense budget. Its unclear however, how much a president should or legally can get involved with negotiating individual contracts but it is an interesting point.

Below is the full transcript of Trump’s Thursday appearance on the Hugh Hewitt Show and at the bottom of the transcript is the audio of the segment:

Hewitt: Now do you like doing Saturday Night Live, because you’re very good at television. Do you love this opportunity?

Trump: Well, I’ve done it before. I’ve hosted before, and I’ve been on a couple of times, and you know, Lorne Michaels is a great guy, and have done an amazing job. It’s a very, very important show. You know, over the last month, I did, as you know, with Vladimir Putin, I did 60 Minutes, and they got tremendous ratings on that show, and now, I’m doing Saturday Night Live. So those are two really iconic shows. I will, I think I’ll have a good time. I mean, I’ll speak to you maybe next week if you want. Then I’ll let you know specifically. But I look forward to having a good time. It’s going to be a big deal, and they’re thinking that this will be one of their most successful shows that they’ve done in a long time, so we’ll see.

Hewitt: That’s true. I never watch, and I’m going to watch it on Saturday night, because you’re going to do the cold open. And it’s going to be great. So now here’s the serious issue.

Hewitt: Well, okay, I’m sure I will. Here’s the serious issue of the day. Yesterday, 18-year-old Muslim student named Faisal Mohammed goes on a rampage at the University of California, Merced. They don’t release his name until today. Why not, Donald Trump? What do you think is going on with the authorities that they don’t…

Hewitt: So I don’t know if it’s a jihadist, but you’re kind of an anti-PC guy, and I think they held it back for fear of being thought Islamophobic, because it’s an Islamic name. Do you think that, is that, do you share my suspicion?

Trump: When Obama got up and said we’re sending 50 people over to Syria, and to Iraq, I guess, and probably he doesn’t even know where they’re going, but we’re sending 50 going over there. I said wow, that’s really bad, because those people now, instead of going over quietly and doing what they have to do, people are watching them, looking for them all over the place. And I said that’s something that should be kept quiet. This, I think, is pretty much the opposite.

Hewitt: All right, now moving, I always ask you if you’ve got your defense team ready to roll out, yet. Are you going to give me any names, yet?

Trump: Well, no, but I’ve been really, you know, I’ve been pretty good in terms of that stuff. If you look at my book, in the year 2000, I said Osama bin Laden. You saw that. You would be impressed with that one, I think.

Trump: But in the year, in fact, when Morning Joe, somebody was on the show, and they showed off the book, and I said Osama bin Laden, he was a well-known terrorist at the time. And that was before I had aspirations politically, believe me, long before. And I did the book, and mentioned Osama bin Laden, and essentially said he’s going to crawl under a rock, and you’d better put him away. And they didn’t put him away, and you saw what happened. You had the first World Trade Center attack, which was a serious attack, but not obviously like what ultimately took place. And all of those people sitting around a table said he actually mentioned in his book before the World Trade Center disaster the name Osama bin Laden. And I immediately thought of you. I said I wonder if Hugh’d be impressed by that. So…

Hewitt: I am. You pay attention. That’s why I’m looking for your national security team at some point.

Trump: I do. No, I have a good team, and I have a team also that’s forming.

Trump: And I must say this. I’d like to see, we had, as you know, Fox came out, I was a strong, strong number one yesterday. They came out last with the numbers, the polling numbers.

Trump: And you know, I want to do down the line. I am, in the meantime, working with people that are terrific and observing everything and reading lots. And it’s something that I find, you know, tremendously interesting. Everybody said I’ll be the best at, in terms of jobs and the economy, but I actually think that I will be the best in terms of the military and strategy.

Hewitt: That’s where my last question is. Last week, the Pentagon announced they gave the B-3, the strategic bomber contract to Northrop Grumman, and that’s going to be billions and billions of dollars. Each one of them cost, they think, about a half billion bucks each, $564 million. Do we need a strategic bomber, Donald Trump? Or should we just stick with submarines and missiles? And if so, do you think it has to cost that much?

Trump: No, it doesn’t have to cost that much. And by the way, they also are giving out, or in the process of giving out, I don’t want to speak too strongly about this, because maybe they won’t do it, they’re giving out a new, as you know, Air Force One, and that’s a $3 billion, with a B, $3 billion dollar plane. And I said I guarantee you I could save hundreds and hundreds of millions of dollars, and I guarantee you that Boeing would leave something on the table. $3 billion dollar Air Force One. So you have that. Now when you talk about the bomber, here’s what I don’t like. I have been reading, and I read one article in particular, where the pilots, and these are great test pilots, and pilots generally, but pilots in testing it said our old planes are better. They perform better. They handle better. Every aspect, they were saying they’re better. So I’m saying wait a minute, if they’re better, why are we ordering these unbelievably expensive planes? So I would have some real problems because of cost, and I know I could get the cost down. But what bothers me tremendously is the fact that I heard test pilots saying that the old planes maneuver better, work better, and they like them better. That bothers me.

Hewitt: Yeah, a lot of people like the F-18 Superhornet more than the F-35, but this B-3, the strategic bomber, I think we have to have bomber, but I will probably be bringing this up in Las Vegas, and I want you to be ready for it, along with all of the other candidates, because I think we need to have a national security conversation, don’t we, on that debate stage?

Trump: We do, and it’s got to be reasonable, and it’s got to be, we have to get a lot more, we have to get a lot more for our buck. We’re putting up the dollars, we’re spending unbelievable dollars, and when you talk about planes costing that amount of money, can it be done for less? I guarantee you it can be done for not less, but much, much less. But you check this out. The pilots that were testing it did not like it as much as the old equipment. That’s not good, and I think you would agree with that, Hugh.

Hewitt: I do, and I want to let you go. I just want to get one assurance from you. You’re not going to be doing Kurds/Quds in the Saturday Night Live open, are you?

Hewitt: Have a great open on Saturday Night Live, we’ll all be watching.

Trump: Enjoy it on Saturday night. Thank you very much, Hugh. Talk to you next week.

YO, NEVER-TRUMPERS: Under Biden, Baby-Killing Is Kicking Into High Gear — Are You Proud?
January 20th, 2021 Clash Daily