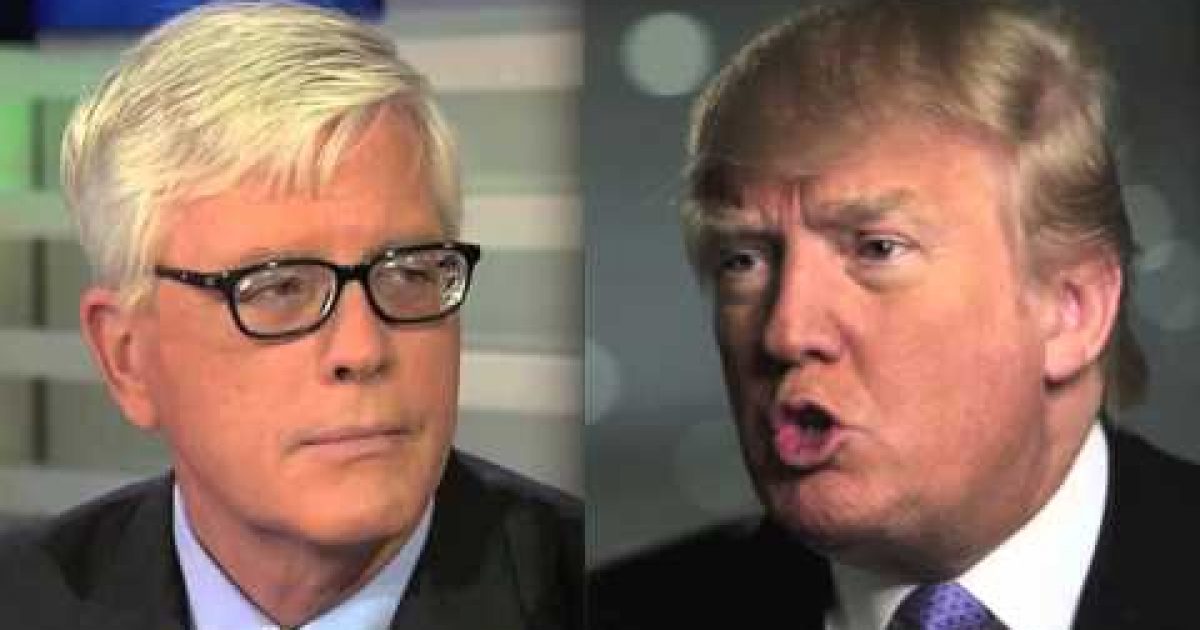 Continuing his series of interview with each presidential candidate, Monday’s Hugh Hewitt program featured the host interviewing, the bombastic, billionaire of birtherism, Donald Trump. In a rare moment of speaking without trashing his fellow Republicans, Trump hit up Obama’s failure in bettering the lives of African Americans, and rallying the entire country.

Below is the transcript and video of this segment of the interview:


Hewitt: And so what, what should the conversation be about? As I said on Face the Nation yesterday, after the people are buried and grieved in Charleston is when people ought to talk about the Confederate flag. But generally speaking, there is this series of incidents involving race. Is there a lesson that Donald Trump draws from them?


Trump: Well, one of the things that I watched in Charleston, and I’m there a lot, and we have a lot of relationships over there, and one, I thought it first of all was horrible, and this guy is a sick cookie and lots of problems and everything else. But I thought it was amazing the way the people came together. It was like beautiful. There some something beautiful, even right after this horrible tragedy took place, the way they held hands and prayed, I saw them drop to their knees and start to pray. There was something really dignified, and as horrible as the tragedy was, there was something beautiful the way the people came together, and still are coming together. So I thought it was, maybe it was a lesson, almost, because you see so many problems in so many different locations, Hugh, and all of a sudden, you see this beautiful, this beautiful aftermath to a horrible tragedy. And I watched it, and I thought it was really incredible, actually.

Trump: Well, we have an African-American president, and you know, the biggest thing that I thought, I was never a fan, but I always thought that when he got elected, when Obama got elected, he’d be a cheerleader for the country. And certainly, you would have thought he would have been much better for African-Americans who are really suffering, more than anybody else right now in terms of jobs and everything else. So you have an African-American president, and African-American youth is doing worse than virtually it’s ever done. I mean, we’ve had some pretty bad times in this country, but virtually, it’s ever done, and you would think that that couldn’t have happened with Obama as president. So look, I am a big believer in jobs. We’re losing our jobs to China. We’re losing our jobs to Mexico and so many other places. And I’m just a big believer we have to bring our jobs back. We have to have plants being built in this country, not in other countries. I’m a free trader, but the problem with free trade is we need smart leaders, and we don’t have smart leaders. I love free trade. I love the concept. But we don’t have free trade with China, because if you want to sell something in China, if you’re a manufacturer, Hugh, and you want to go to China and sell your product, it’s going to be almost impossible for you to do so. And yet they come in here and they openly sell it, no tax, no nothing. So I believe in free trade totally, but you need smart leaders. And you need rules.


Hewitt: But Donald Trump, when you get on a microphone, the whole country watches you. And I call you just an American P.T. Barnum combined with Howard Dean combined, you’re just legendary at getting people to focus on you. Yesterday, Michael Gerson said one of the Republicans has to step up and talk about ending or diminishing violence in the United States, and I agree with that. How could Donald Trump help in that? I mean, how do you help stop the slaughter in Chicago, not just the slaughter in Charleston, but generally, what can candidates do to bring down the volume and to increase the peace?

Trump: It is a huge problem. It’s a problem that’s very rarely discussed. It’s being discussed by you a little bit, and a few other people. But even you don’t want to hit it the way you’ve really liked to hit it. If you hit it hard and you start talking about, and if you start talking about and going into great details, you get called racist. You get called everything. It’s a huge problem in this country. People need to be enthusiastic. They need to love our country. And they need to have hope. They have no hope. They absolutely have no hope. And they have no jobs. They need jobs. They need hope. They need cheerleading. They have nothing going right now. The gang violence, which is a part of this, is unbelievable. So it’s a big problem. But one of the ways you have to start, and if you look at what’s going on in Chicago, it’s like a bloodbath, and it’s only in certain areas of Chicago, and nobody talks about it. They don’t say that. They just talk about Chicago. I mean, it’s only in certain areas of Chicago. It’s in certain areas of New York and lots of other places. They need hope, and they need jobs. You’ve got to, you’ve got to create incentives for people to go out. And you have to be able to have the jobs. I know people that have, you know, they go to college, kids go to college, they spend money, they borrow it to the hilt, they owe tremendous student loan debt, they have debt all over the place, and they get out, and they do well. They get good marks, and they’re really good students, and they can’t get a job. They don’t have jobs.