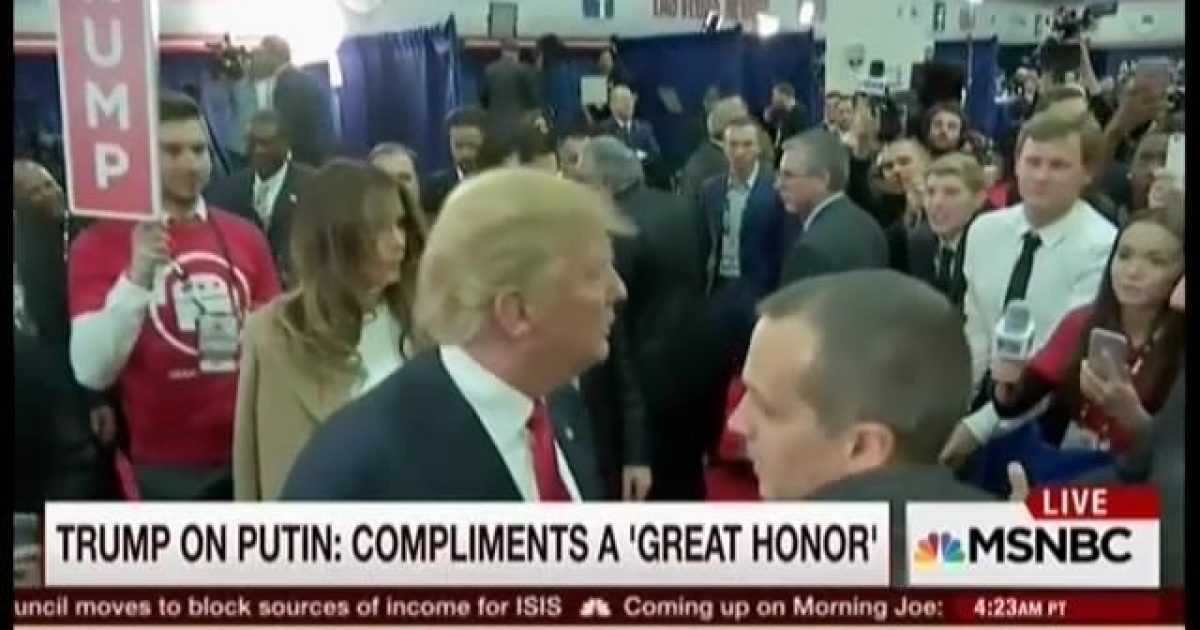 With each passing day Donald Trump is beginning to sound more and more like Barack Obama. It’s not just his thin skin, the fact that he narcissistically talks about himself more than the issues, or  the way he lashes out to anyone who disagrees with him, nor is it the fact that he pivoted right to run for president, until recent years he was both pro-abortion and pro-amnesty for illegals (before anyone makes the claim everyone has a right to change their opinion, you are right– but I don’t hear anybody saying that about Rubio).

On Friday morning,  “The Donald” added to his Obama-like resume as he praised Russian President Putin and crapped on the United States during a Morning Joe interview.

When asked about the positive comments made about him by Vladimir Putin, the GOP candidate gushed “When people call you brilliant, it’s always good, especially when the person heads up Russia.” Joe Scarborough responded: “Well, also he’s a person that kills journalists and political opponents and invades countries. Trump didn’t seem Putin’s behavior concerned him. “He’s running his country and at least he’s a leader, unlike what we have in this country. Scarborough tried to get Trump to think about what he was saying, “But again, he kills journalist that don’t agree with him.” Trump responded by putting down America.   “I think our country does plenty of killing also, Joe. You know. There’s a lot of stuff going on in the world right now, Joe.  A lot of killing going on and a lot of stupidity and that’s the way it is. You didn’t ask me the question. You asked me a different question. That’s fine”

Finally, Scarborough changed the question a bit and Trump admitted that killing journalists wasn’t a good thing (not that anyone thought he did but with Trump one never be sure) but he continued to lavish praise on the Russian despot.

Scarborough, so how would America’s relationship with Russia change if you were president? Trump, Well, I think it would be good. I’ve always felt fine about Putin. I think he is a strong leader. He’s a powerful leader. He’s represented his country the way the country is being represented. He’s got popularity within his country. They respect him as a leader. Certainly the last couple of years they’ve respected him as the leader. Obama’s in the low 30s, upper ho 40s and he’s in the 80s.

Barack Obama is a lousy President, the worst in my lifetime, heck I write about it every day of the week. But allow me to suggest Trump’s praise of Putin is reminiscent of Obama’s, let’s make friends with every despot, proposals during his campaign (which eventually led to the lousy Iran deal). I would also suggest that the only difference between Trumps “we kill people too,” and the Obama’s apology tour is that Trump made his declaration on American soil.

Note to Trump supporters. Before you write the hate mail please indulge me by thinking of your answer to the following question.  If it was Jeb Bush, or Hillary Clinton making the above comments wouldn’t you criticize them from here to Princess Leah’s home planet of Alderon? Yeah, I thought so.

Below is a video of this segment of the interview