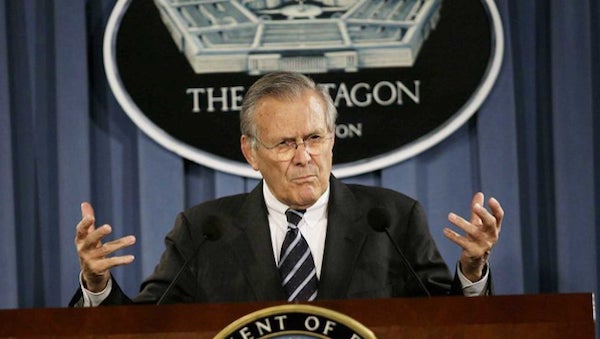 A Chicagoland native and Eagle Scout who served 35 years in the U.S. Navy — including time as an active duty pilot — and as an Illinois congressman in the 1960s, he was more known as defense secretary during the Gerald Ford and George W. Bush presidential administrations — both as the youngest at 43 and the oldest, 74, person to hold the post.

Rumsfeld presided over Cold War strategies in the 1970s, then oversaw the Pentagon’s response to the terrorist attacks on September 11, 2001, nearly three decades later.

Rumsfeld was in his Pentagon office on 9/11 when the building was hit with the third hijacked plane by Islamic jihadists that fateful Tuesday morning.

“I went outside and there were little pieces of metal spread all over the grass, and the smoke was billowing up, and the flame was very visible and leaping out of the building,” he described.

After the attacks, Rumsfeld was part of a senior-level effort to wage war against Al Qaeda and the Taliban in Afghanistan and Iraq.

Marc Thiessen, who served as Rumsfeld’s speechwriter, claimed the defense secretary transformed the U.S. military, including revitalizing our ballistic missile defenses, which he believes benefits presidents to come and the country henceforth.

Rumsfeld was one of the rare people in a political position who took responsibility for their own actions.  The major issue for the 2006 midterm elections was the Bush administration’s handling of the Iraq war, which Rumsfeld led.  On election day, the GOP lost control of both the House and the Senate.   Donald Rumsfeld took responsibility and made the decision to resign the day after the election.

The Princeton graduate married his wife of 66 years soon after his studies concluded. They have three children, seven grandchildren, and three great-grandchildren.

In his final years, he headed the Rumsfeld Foundation to promote public service and work with charities supporting military families and wounded veterans.

“Rummy” was one of 50 Bush administration alumni to endorse then-candidate Donald Trump in 2016.

After his government tenure, he also made media appearances and wrote his memoir, “Known and Unknown,” in 2011.

The title is likely based on his famous quote:

Rest In Peace, Donald Rumsfeld. You were a public servant in the truest sense of the words.