But It's Lemon Who Needs To Seek Help 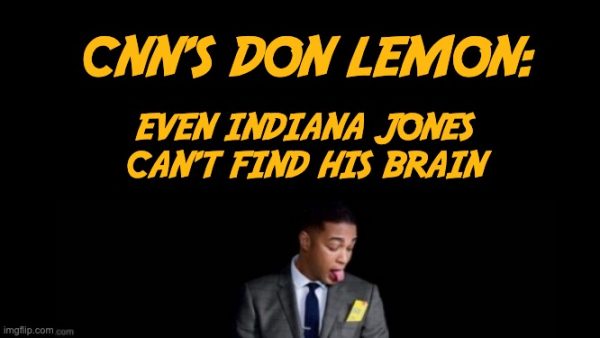 Lemon made the comments while discussing how the President continues to hold campaign rallies with supporters despite an ongoing pandemic.

The host claimed he had to get rid of friends in his life who support Trump because they refuse to accept the ‘scientific evidence’ he would provide them in discussing COVID.

“I had to get rid of them because they’re too far gone,” Lemon, who appears to be a lousy friend, said. “I try, and I try, and I try, they say something really stupid, and then I’ll show them the science, and I’ll give them the information, and they still repeat those talking points.”

Even the New York Times has noted that “death rates have dropped for seriously ill COVID patients.” “Survival rates have improved with medical advances and less crowded hospitals, studies say,” according to the report.

But Americans, in Lemon’s view, are supposed to live in fear based on his science.

CNN’s Don Lemon says he had to get rid of a lot of friends of his that are Trump supporters:

"I just had to get rid of a lot of people in my life because sometimes you have to let them go. I think they have to hit rock bottom like an addict.”pic.twitter.com/OTou3b54s4

These words are from the ‘genius’ who believes that everybody who ever grew up in America, including American revolutionaries and our founding fathers, is, by default, racist. This proves that President Trump was much too kind when he referred to Lemon as the “dumbest man on television.”

Lemon proceeded to compare Trump supporters to junkies who need to hit the absolute bottom before they can attain redemption.

“I had to get rid of a lot of people in my life because sometimes you’ve just got to let them go. I think they have to hit rock bottom like an addict, right?” he told Cuomo.

Interesting, since many people would consider being friends with Lemon to be ‘rock bottom.’

Rock Bottom? When will Lemon hit rock bottom? He’s been embarrassingly drunk on air on New Year’s Eve every year since 2016 when he got drunk and told Kathy Griffin when she had a nice rack.

In subsequent years he told the world he’s a lousy boyfriend and promised to be a better one, got his ear pierced, had his microphone cut off by the network, and claimed that somebody did a weird white power thing to him.

Did he drop friends, or did friends drop him after growing tired of his inability to control himself?

Don LeMon thinks that not being friends with him anymore is “rock bottom” for people in his life. https://t.co/7GHj5dzCTn

The Hate for the President and His Supporters is Palpable

Imagine getting science advice on the pandemic from a guy who once speculated that a missing Malaysian airliner had simply been sucked into a black hole.

No, we’re not kidding.

“That’s what people are saying,” Lemon said in a panel segment in 2014 discussing the disappearance of Malaysian Airlines Flight 370. “I know it’s preposterous — but is it preposterous?”

Lemon and a group of liberal panelists famously mocked the President’s supporters as illiterate “boomer rubes.”

The arrogance, the dismissiveness, the smug cackling, the accents.

If Donald Trump wins re-election this year, I’ll remember this brief CNN segment late one Saturday night in January as the perfect encapsulation for why it happened. pic.twitter.com/8kQ6zN9AZV

And said Trump supporters are “mental”

The Republican National Committee (RNC) eventually turned Lemon’s snide reaction to Republicans into an ad comparing his remarks to those of former First Lady Hillary Clinton, who called them “deplorable.”

President Trump’s description of Lemon as the dumbest man on TV becomes more real every day.