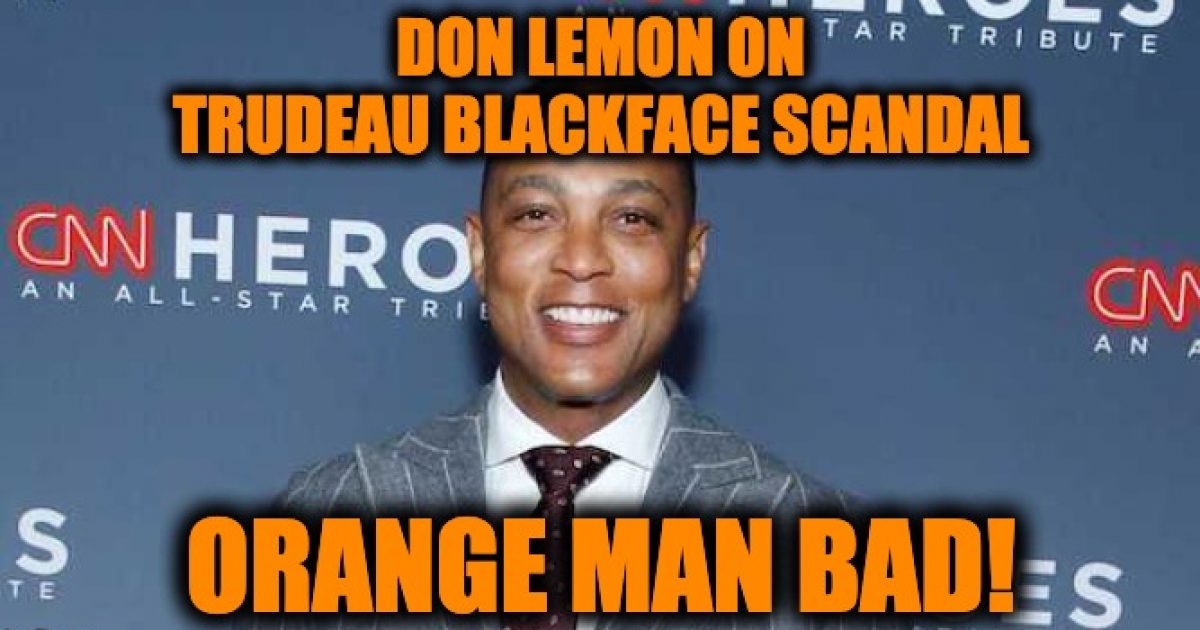 Don Lemon Trudeau
CNN anchor Don Lemon has found what he considers to be the correct angle on the Justin Trudeau blackface scandal – that President Trump is a bad man.

Orange man bad, as they say.

Trudeau was featured in a 2001 photo from a Time magazine report dressed in brownface make up for an “Arabian Nights” party held at the private school in which he taught.

He was apologetic about the whole affair. Which he should be.“I shouldn’t have done that. I should’ve known better. It was something that I didn’t think was racist at the time, but now I recognize that it was something racist to do and I’m deeply sorry.”

“I shouldn’t have done that. I should have known better, but I didn’t, and I’m really sorry,” Trudeau said. “I take responsibility for my decision to do that.”

But if a conservative did it, they’d be ruined. pic.twitter.com/ojim3V59nj

Imagine this was an image of President Trump. And imagine he apologized for doing something stupid in his past. Do you think Lemon, or anybody in the media for that matter, would be forgiving?

To nobody’s surprise, Lemon’s fellow beta male in Trudeau was praised for his apology. Not only did he praise Trudeau, but Lemon took a shot at Trump over a scandal that has absolutely nothing to do with him!

“Wow, a leader apologizing. It seems odd, doesn’t it?” Lemon said following a clip of Trudeau’s statement. “Because we have one who doesn’t.”

Nice leap in logic there, Don. Is it any wonder the President has repeatedly labeled Lemon the “dumbest man on television”? Don, there is a reason President Trump never apologized for wearing blackface—he never had to because he never wore blackface. You see, despite what we hear from your network and the rest of the Trump-hating leftist media, Donald Trump is not a racist.

The CNN ‘journalist’ fawned over Trudeau’s apology to end the segment as well.

I’m sure it does.  It means that you and your CNN colleagues can use it to criticize the American President.

Oh wait no he’s not, he’s commending him and using it as a way to take a shot at President Trump pic.twitter.com/ndCDDVeeEq

Again, no amount of apology from a Republican would ever suffice in Lemon’s world. But liberals who do this – perfectly okay. That’s why you can have a Ralph Northam or Justin Trudeau blackface scandal, and both men can emerge unscathed.

The double standard is sickening, but to paraphrase the James Earl Jones Tag, “That is CNN.”