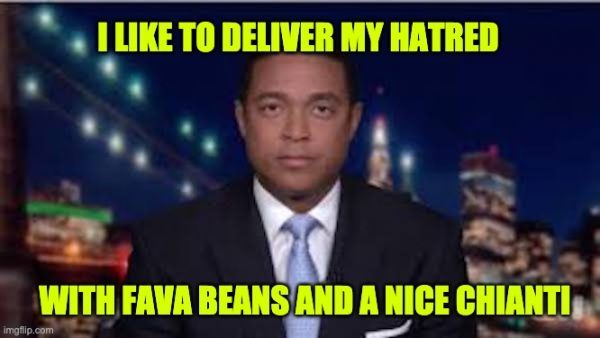 CNN host Don Lemon has never been all that shy about his hatred of President Donald Trump since he took office back in January 2017, but it seems that his Trump derangement syndrome made his brain bleed. the CNN host launched into a bizarre, anti-Trump diatribe on Sunday night, accusing the president of letting President Barack Obama get under his skin because he is “better looking,” better educated” and has a “more accomplished” wife.

But Don Lemon didn’t present his diatribe in a loud rant voice, nor was it drunk sounding like when he went crazy on New Year’s eve a few years ago. Lemon said it in a soft scary “fava beans and a nice Chianti” serial killer-type voice.  Along with the weird voice, his claims were mostly wrong and some were just plain stupid.

He left out that Obama is an anti-Semite, and Trump isn’t.

Made it on his own? But last week, Lemon tweeted that no one should ever be embarrassed to ask for help.  I guess he meant no one except Donald Trump.  Bill Ayers says he wrote Obama’s first book “Dreams From My Father” is that considered making it on his own?

Better looking? That’s a matter of personal preference. To be honest, neither Trump nor Obama turn me on that way. Although Obama made Chris Matthews tinkle down his leg.

Wife more accomplished?  I am not going to take anything away from Michelle Obama. Before she was the first lady, she was  Vice President of the University of Chicago Medical Center, making over $300k/year.  At her job, she helped to create a program where the uninsured get sent to a different hospital. Imagine that, her job was doing her utmost to make sure that the poor go elsewhere. That included poor people of color.

Melania Trump was a model whose net worth independent of her husband is $50 million. She speaks six languages Slovenian, French, Serbian, German, Italian, and English (Five more than Michelle Obama).

Which wife is more accomplished. Well, Melania is a self-made multi-millionaire who speaks six languages but never blocked poor people from going to the local hospital. But I will leave this one up to the reader.

Who is smarter Obama or Trump? I go for Trump as Obama couldn’t fix the economy in eight years, Trump did it in two. Better educated? Obama did graduate from Harvard Law, but Trump graduated from the  Wharton Business School, one of America’s most prestigious schools of business.

Didn’t like Obama because he was Black? Which president has a better record helping African-Americans economically? That would be President Trump.

Put it all together, Don Lemon is both scary sounding and stupid…Sorry, Don.