Go Forth And Conquer, Donald Trump Jr. We're On Your Side! 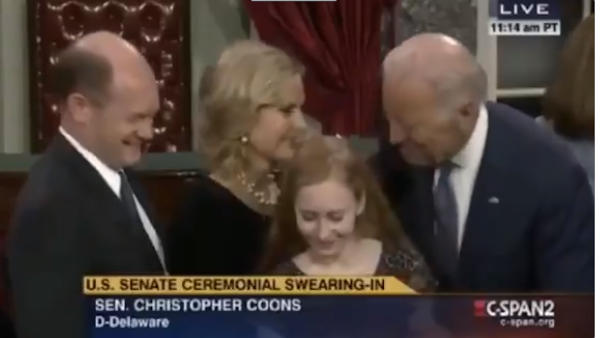 Creepy Joe Biden is pretty mockable. Needing treatment for his obvious dementia is enough. But his perverted behavior of touching women or smelling their hair has been the stuff of legend for years. Don Jr mocks creepy Joe

Donald Trump Jr melted the left-wing media into a puddle when he jokingly suggested that Creepy Joe was actually creepy.

“There are SO MANY different clips of @joebiden bizarrely & inappropriately sniffing hair & getting touchy with young girls that Twitter made me break up this 4 min comp into two separate videos. Does anyone really think this is normal behavior from Joe!???” Donald Trump Jr.

The @nytimes is right. There’s NOTHING CREEPY at all about how @JoeBiden interacts with the kids in this 4+ min long video.

All the touching & hair sniffing is TOTALLY APPROPRIATE & 100% NORMAL. Everyone does it!

I'm a bad person for mocking him & thinking it's disgusting!!!? pic.twitter.com/DgQOnaK8q6

Yes, you saw it too, Creepy Joe Biden is…creepy. And he is worthy of being mocked. Hugging little girls who are obviously uncomfortable. Smelling their hair, making them feel like they’ve been slimed by The Blob of old movie fame when they didn’t even see the old movie.

The New York Times immediately said he was “smearing” the former Vice President with a “baseless Instagram post.” Baseless?  Those instances actually occurred. They are a part of C-Span’s record.

When Donald Trump Jr posted a picture of Biden, who said, “See you later alligator,” and an alligator responded, “In a while, pedophile,” the media screamed foul. Just because the leftists have no sense of humor doesn’t mean the rest of us are that sour.

Donald Jr can smile. The real joke is that the left “can’t meme,” and if you look at the ones they’ve tried to create for Creepy Joe, there’s nothing to smile about. None of them are funny at all. In fact, the only thing funny about them is how they’ve been altered by Republicans.

Joemental is more like it. Then there’s the Inquisitr, a left-wing rag that insinuated that the jokes about Creepy Joe’s mental acuity are from “Qanon conspiracy theories.” Hardly. Joe Biden can barely remember what day it is. The other day he claimed millions of  American lives have been lost to the COVID-19 pandemic and 85,000 jobs were lost.

That would be inaccurate, Creepy Joe.

Or this gem: And in keeping with the sex theme:

.@JoeBiden: What we need is more “economic intercourse” pic.twitter.com/zLa8hqspC0

Creepy Joe Biden is creepy. Adding the sex assault accusation of Tara Reade, (you know, Schumer says Biden’s response that he didn’t do it is perfectly fine but how would he know-Schumer can’t even wear glasses right), there could be a basis for the “Creepy Joe” title.

Eva Murry clearly remembers where she was on one particular night back in 2008 when she was 14-years old.  According to Murry, the 2020 Democrat presidential candidate, Joe Biden made an extremely inappropriate comment about her breasts.

Whether he’s an actual pedophile or not, we have no idea. If we could ask Epstein about it. Biden is known for inappropriately touching women in public. The MSM always treated it as a joke. Joe’s problem is that he touches women who don’t want to be touched by him. 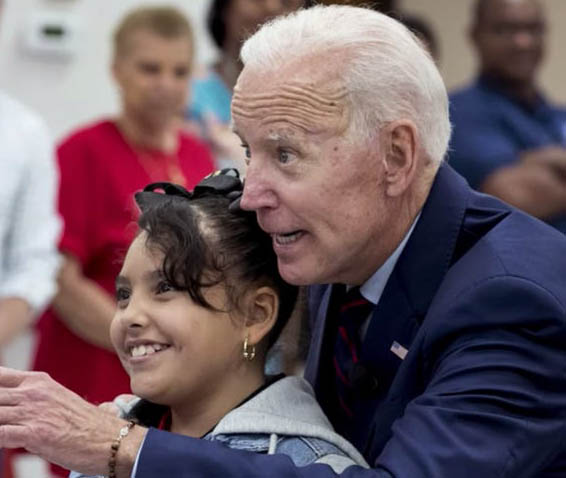 But he doesn’t act normal in any situation. And he’s definitely confused. Did these young ladies get disinfectant wipes after his, um, attention? Just asking.

This video made in October 2018 shows much more. He not only smells hair but grabs breasts. Adult women and young. Along with all of the evidence and witnesses, it makes one believe the cases above even more—Joe Biden is a predator.

So go forth and conquer, Donald Trump Jr. We’re on your side!