Does Bret Stephens Think He’s My Mother? Or The GOP Voter Police? 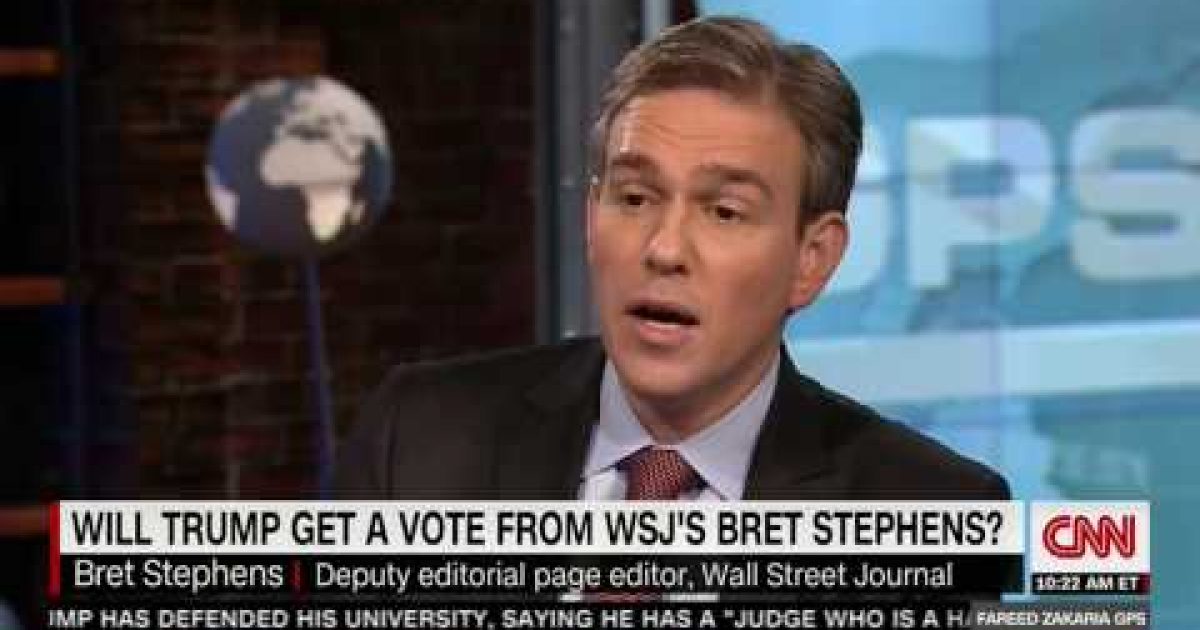 The Wall Street Journal‘s Bret Stephens was on Fareed Zakaria’s Sunday afternoon, and declared that it was important for Donald Trump to lose the general election by such a large margin that the Republican party and its voters “learn their lesson” and never nominate someone like him ever again.

“I most certainly will not vote for Donald Trump, I will vote for the least left-wing opponent to Donald Trump and I want to make a vote that makes sure he is the biggest loser in presidential history since, I don’t know, Alf Landon.”

Then Stephens went off: “It’s important that Donald Trump, or what he represents, this kind of quote ‘ethnic conservatism or populism,’ be so decisively rebuked that the Republican Party and the Republican voters will forever learn their lesson that they cannot nominate a man so manifestly unqualified to be president in any way, shape or form.”

Learn their lesson? He wants us to be punished? What, is he my mother?  The voter police?  Who the hell does he think he is? Who died and made Bret Stephens king?

People like Stephens (and Bill Kristol) don’t understand why Donald Trump is the nominee. It’s really simple, people are pissed off.  Our leaders in congress gave/tried to give the people programs they didn’t want and ignored what the people wanted.

For years the American people have been saying protect the southern border—for years they’ve been ignored (the gang of eight bill certainly didn’t do that). People are angry about sanctuary cities. Americans have been saying fix the tax system. Americans have complained about the political correctness dominating the political discourse which led to eight years of refusing to identify Islamist zealots as the terrorists we are fighting. While they don’t want war, Americans are tired of our leaders not giving our military the tools they need to win. They are also tired of the most powerful nation of the world bowing down to its enemies.

Why would Bret Stephens or any American want to punish other Americans for voting their opinion? I was not a Trump supporter, but he won the nomination fair and square, he got more votes than anyone else. But Stephens believes those voters should be punished for voting for who they believe is the best candidate for their futures. Perhaps Stephens doesn’t want to stop at a major Trump loss, perhaps he wants to extend the punishment. Start a new Spanish inquisition. Give them the rack?

Bret Stephens is an excellent writer and his foreign policy column in the WSJ is a must read, but on Fareed Zakaria he displayed the arrogance and paternalism that gave Trump the nomination in the first place. That is…the idea that the politicians know better than the people and the desires of the grass roots desires can be ignored.

Well Americans have gotten sick and tired of being ignored and like it or not they don’t care if Donald Trump talks in a crude manner or says things in an undiplomatic way. I understand the way he feels because It bothered the heck out of me (and still does) but it didn’t bother his supporters.

Bret Stephens must not be a big believer in free speech after all he says the people who chose a candidate he doesn’t agree with should for me. As for me I fought Donald Trump tooth and nail for months, I disagree with him on so many issues but if you put all those negatives together and multiply them by ten, he is still a better choice than Hillary Clinton.

In a related issue, Bill Kristol is still looking for a third-party conservative candidate to run against Trump and Clinton.  Understand that Kristol knows there is no way for a third-party candidate to win many states are way past their deadline to file. There are only two realistic results if Kristol succeeds.  First is that he will draw away enough Republicans to ensure that Hillary wins the presidency, the other is to win enough states to ensure no candidate gets 270 electoral votes. Should that happen it goes into the House of Representatives where each state gets one vote. The state’s choice is determined by a vote within its delegation. If that vote is a tie, the state loses its vote. A winning candidate must receive the votes of a majority-26-of states. Now does he really believe that members of the house will vote against their own party’s candidate, or the way their state voted in the election?

If Kristol finds a candidate, he will be spending millions of dollars and if he accomplishes anything it will be to elect Hillary Clinton president.  But that may not happen, the word is he is having a very difficult time finding someone to run as a third party candidate and is beginning to get desperate. How desperate? Well, Bill Kristol called me this morning and asked if I would run as his third party candidate. When I answered in the negative, he asked to speak to my dog.