Now we know why the there is no federal investigation of the criminal enterprise ACORN. There was one..well that is until President Obama’s Attorney General Eric Holder made it disappear.

Judicial Watch  has obtained documents from the FBI (embedded below) which detail federal investigations into ACORN. The  FBI documents  show serious allegations of corruption and voter registration fraud by ACORN. They also show the Obama administration’s decision to shut down the criminal investigation and let ACORN off the Hook.

The documents include background information on two specific complaints filed in October 2008 by Lucy Corelli and Joseph Borges, Republican Registrars of Voters in Stamford and Bridgeport, Connecticut, respectively, during the 2008 election season.

According to Corelli, on August 1, 2008, her office received 1,200 ACORN voter registration cards from the Secretary of State’s office. Over 300 of these cards were rejected because of “duplicates, underage, illegible and invalid addresses,” which “put a tremendous strain on our office staff and caused endless work hours at taxpayers’ expense.” Corelli claimed the total cost of the extra work caused by ACORN corruption was $20,000. Likewise, Borges contended that: “The organization ACORN during the summer of 2008 conducted a registration drive which has produced over 100 rejections due to incomplete forms and individuals who are not citizens…” Among the examples cited by Borges was a seven-year old child who was registered to vote by ACORN through the use of a forged signature and a fake birth certificate claiming she was 27-years old.

The FBI and Department of Justice opened an investigation and gathered some evidence. But Obama Justice Department, had to protect the President’s buddies.  While noting that ACORN had engaged in “questionable hiring and training practices,” closed down the investigation in March 2009, claiming ACORN broke no laws.

Other documents show that the Bush Justice Department failed to prosecute ACORN voter registration fraud of non-citizens in Phoenix, Arizona in 2007 because the allegations that led to the opening of the investigation were “unverifiable.” Notably, the FBI document detailing this questionable decision reveals that a “draft Intelligence Bulletin…concludes that ACORN’s employment practices perpetuate fraudulent voter registration.”

…The documents also include details regarding numerous allegations of corruption extending beyond voter registration fraud, to include attempts by ACORN employees to coerce workers to participate in campaign activities on behalf of Democratic candidates.

Thus giving additional credibility to the testimony of Anita Moncrief, the ACORN whistle blower who is being sued by the organization.

“These documents reflect systematic voter registration fraud by ACORN,” said Judicial Watch President Tom Fitton. “It is a scandal that there has been no comprehensive criminal investigation and prosecution by the Justice Department into this evident criminal conduct. Given President Obama’s close connections to ACORN, including his campaign’s hiring of the ACORN’s Project Vote organization, it seems rather obvious why Attorney General Holder has failed to seriously investigate these and other alleged ACORN criminal activities.”

Boy oh Boy, this must be what the President means by transparency, hiding the activities of a criminal enterprise that just so happens to be an integral part of his progressive movement. 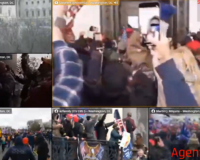