2020 Democratic Party Platform Will Lead To A Nuclear Iran 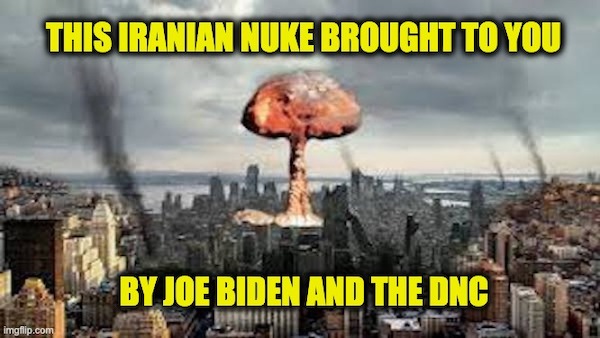 The 2020 Draft Democratic Party Platform puts the Sunni Muslim States, Israel, and the United States in existential danger because of the promise to put the United States back into the Iran Nuclear Deal (JCPOA), which President Trump correctly pulled the country out of in 2018.  DNC allows Iran nuclear

Specifically, a paragraph on page 79 of the platform reads:

We believe the Joint Comprehensive Plan of Action (JCPOA) remains the best means to verifiably cut off all of Iran’s pathways to a nuclear bomb. The Trump Administration’s unilateral withdrawal from the JCPOA isolated us from our allies and opened the door for Iran to resume its march toward a nuclear weapons capacity that the JCPOA had stopped. That’s why returning to mutual compliance with the agreement is so urgent. The nuclear deal was always meant to be the beginning, not the end, of our diplomacy with Iran. Democrats support a comprehensive diplomatic effort to extend constraints on Iran’s nuclear program and address Iran’s other threatening activities, including its regional aggression, ballistic missile program, and domestic repression.

Returning to the deal that President Trump correctly pulled the country out of, gives Iran free reign to go nuclear in at least three ways:

Below are the details:

Obama Lied about anytime-anywhere inspections.  Because of a secret side deal revealed by the Associated Press long before the deal was agreed to, Iran gets to self-inspect the Parchin military base with no IAEA inspectors present. Parchin is the site where Iran was working on nuclear triggers for its bomb program. Therefore there is no real way to know if Iran is violating the JCPOA at Parchin.

All other military base inspections are allowed under the JCPOA.   The  agreement specifically “requests the Director-General of the IAEA to undertake the necessary verification and monitoring of Iran’s nuclear-related commitments for the full duration of those commitments under the JCPOA.” Despite what the JCPOA states, the Iranian authorities claim military sites are off-limits to the IAEA. Sadly the IAEA and the countries that stayed in the deal refuse to push the point because they didn’t want Iran to seem non-compliant, even though they were non-compliant.

One of the problems with the Iranian authority’s refusal involves “Section T” of the deal. In Aug. 2017, the IAEA’s announced that it had been unable to verify a vital part of the JCPOA known as “Section T.” That section lists, “Activities which could contribute to the design and development of a nuclear explosive device.” Their refusal to allow inspections doesn’t mean Iran violated “Section T.” It means is your guess is as good as mine, because nobody knows — but the deal says the IAEA is supposed to inspect.

The promised sanction “snap-backs” don’t really exist.  President Obama gave Europe, China, and Russia written promises. He wrote that the U.S. guarantees any of their companies who make deals with Iran, would not have to stop working with Iran should sanction need to be re-imposed should Iran get caught violating the JCPOA.

Kerry said it was a forever deal, he lied: The agreement allows Iran to go nuclear after ten years.  Do you remember when John Kerry insisted the Iran nuclear deal was a “forever deal?” That was a lie. Some of the provisions expire after year 10, and the rest of them after year 15. Based on the agreement, by the end of year 15, Iran could have in place a nuclear infrastructure that could produce significant quantities of weapon-grade needed to create a few nuclear weapons within months.

The issue of the changed language was raised at a July 2015  Senate Foreign Relations Committee hearing.  Secretary of State Kerry was there trying to sell the agreement. He was questioned by Sen. Menendez about the change in wording. The ensuing conversation suggests Kerry was lying, totally clueless, or both. Menendez kept reading out loud from the old and new resolutions, switching from “shall not” to “called upon not to,” while Kerry kept insisting that the different words were precisely the same.

The JCPOA Reduced Iran’s Reporting requirements: The Iran nuclear deal significantly reduces the reporting requirements about Iran’s nuclear program that existed before. That is, according to IAEA Director General Yukiya Amano, the former head of the international inspection group International Atomic Energy Agency.  Iran threatened Mr. Amano with harm if he reveals anything about the side deals.

Iran never reported to the IAEA Their nuclear History: Iran had been non-compliant with its obligation to reveal its atomic history. According to the JCPOA, the rogue nation was supposed to disclose its pre-deal nuclear program. This was a condition for implementing the agreement.  The historical knowledge is necessary so the IAEA will know how, when, and where to inspect Iran’s program in the future.  When it came time to “fess up,” Iran told the IAEA that it never had a nuclear program. The IAEA reported what it was told instead of pushing back against a blatant lie.  This is another example of a breach of the accord that was published as compliance.  In other words, the entire agreement was based on a lie and should never have been implemented.

Using information secretly gathered by a Mossad operation in Iran and verified by the United States, in April 2018, Israeli Prime Minister Binyamin Netanyahu exposed a significant lie in the information the Iranians supplied to the IAEA for its 2015 report. Iran not only had a nuclear weapons program (called Amad) but after it was supposedly canceled in 2013, the work continued.

In January 2020, Iran declared it will no longer abide by any of the restrictions imposed by the 2015 nuclear deal (JCPOA). But it doesn’t really matter. The JCPOA didn’t really restrict Iran, and Iran wasn’t observing essential parts of the agreement anyway.

Per The Institute For Science And International Security, a non-partisan organization that goes by the unfortunate acronym of ISIS, the IAEA found many Iranian violations of the JCPOA in November 2019 two months before Iran said it would no longer abide by the agreement. The main violations, some of which are not fully reversible, are highlighted below:

The provision places many of Iran’s neighbors in grave danger, including the Sunni Muslim countries and Israel.  Iran has promised to destroy them. What most Americans forget is that Iran calls Israel the little Satan and the United States the big Satan. In other words, along with many other parts of Joe Biden’s platform, this plank puts the United States in grave danger.