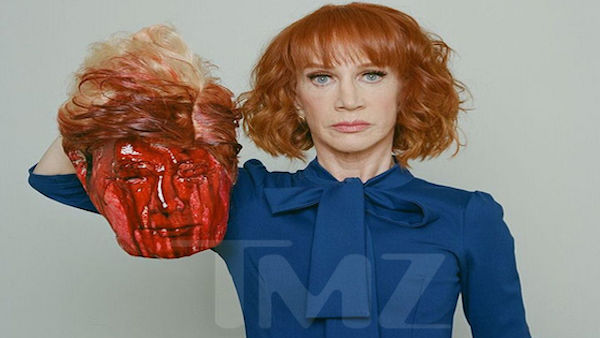 By Andrew West  and Jeff Dunetz

When Kathy Griffith posed topless I though she could never do anything more disgusting than that. I was wrong.

Long before the days of Donald Trump’s political aspirations, Hollywood and its surrogate entertainment locales such as New York City, have long been pushing the envelope as to what is acceptable as it pertains to denigrating American politicians.  Television staples such as Saturday Night Live practically pays all of its bills by hiring washed-up comedians and alumni to impersonate key political figures every time Washington D.C. has any pertinent turnover.

With an unconventional President, however, comes unprecedented criticisms.  Furthermore, Donald Trump has been a punching bag in the media for ages before his political aspirations finally came to fruition, giving these leftist celebrities decades of material to regurgitate into the mouths of waiting millennial anger-mongers with “I’m With Her” bumper stickers on their hybrid hatchbacks.

One washed-up standup comedienne is taking things to an unheard of level, however, with her disgusting, tasteless, and possibly threatening photo shoot depicting her holding the severed head of the leader of the free world.

“Kathy Griffin posed with the severed head of President Donald Trump in a bloody photo shoot for artist and photographer Tyler Shields this week.

“In one image, obtained by TMZ, the 56-year-old My Life on the D-List comedian looks directly into the camera while hoisting up Trump’s severed head, which is covered in dark red blood.

“According to the gossip outlet, Griffin joked during the photo shoot that she and Shields, who is known for his shocking artwork, would need to flee the country after the pictures came out, for fear of imprisonment.”

Griffin, who was once an aspiring young standup act, has taken her “talents” to the small screen in recent years.  Buried deep within your cable provider’s menu, Griffin can be found on extremely leftist outlets such as Bravo and LogoTV, rebranding herself as the perpetual sidekick to any and all flamboyantly homosexual D-listers with the ability to keep her name somewhere, anywhere, on television.

This has relegated Griffin to relative obscurity for the younger generation, specifically, the millennial Hillary Clinton devotees who are feigning depression and anxiety over the election of Donald Trump.  With her latest gory move, however, the pale and unfunny has-been is making a run at these youngsters in the only way that she knows how:  Unfunny and over-the-top shock schtick with no real humor.

#1 Kathy Griffin was and is an unfunny piglet

#2 If somebody did this with Barack Obama, the liberals and the MSM would get so angry they’d crap their pants.

The remaining question is what will congressional Democrats say. Especially Democrats like Senators Al Franken (D-MN) and Catherine Cortez Masto (D-NV) Both have benefited from thousands of dollars in political donations from Griffin over the past few years. And Al Franken who like Griffin failed in comedy scheduled to hold an event alongside Griffin on July 7th, just a few weeks in Beverly Hills.

Griffin has given money to both of these Democrats.

Will Franken and Cortez Masto hang on to Griffin’s campaign cash?  Will Franken still stand by Griffin at his book promotion event in a few weeks?

I am sorry. I went too far. I was wrong. pic.twitter.com/LBKvqf9xFB

Boy oh boy she must have gotten a heck of a kick in her ugly butt. Do you believe her?

Yeah me either. She looks like a “D-Lister” desperately trying to avoid falling down to the “E-List”