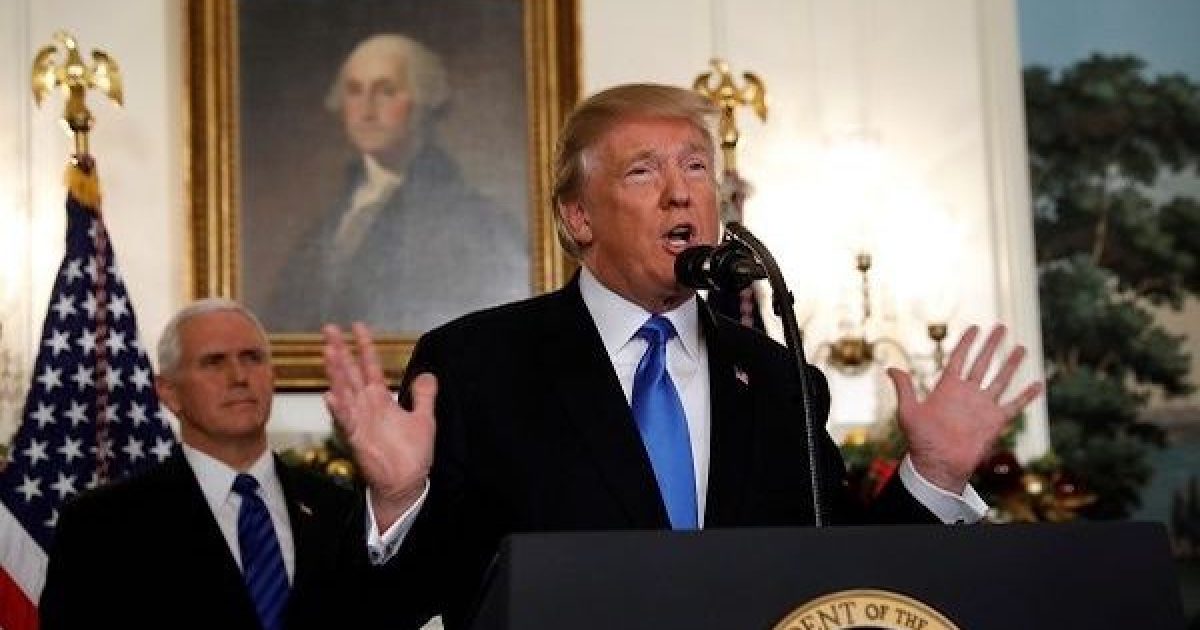 On Tuesday, the sixth day of Chanukah, the United Nations Security Council (UNSC) took a vote on an attempt to reverse the decision by U.S. President Trump to recognize Jerusalem as Israel’s capital and to begin the process of moving America’s embassy from Tel Aviv to the capital of the Jewish State. As expected the President directed Nikki Haley, the United States ambassador to the United Nations, to exercise the U.S. veto and quash the resolution.

Last year, just before the first day of Chanukah there was a different UNSC vote. On Friday afternoon December 23, the anti-Israel team of Barack Obama & John Kerry directed UN Ambassador Samantha Power to abstain when UNSC resolution 2334 came to a vote rather than veto the anti-Israel resolution in the UN Security Council. Since the abstention allowed the resolution to pass, the Obama action had the same effect as an anti-Israel UN Vote.

Not only did the Obama directed action in the anti-Israel UN vote give the Palestinians a free pass to continue to avoid negotiations, it “locked” Israel into the 1948 Armistice line declaring Judea, Samaria, and East Jerusalem occupied Palestinian land. As Security Council resolutions create international law, this meant that the Jewish State’s presence in East Jerusalem, commonly known as the “Jewish Quarter” is illegal. The absurd action ignored the fact Jews have been living in the “Jewish Quarter” since the time of King David, except for the period of 1948-1967 when Jordan kicked out the Jews and destroyed many of the Jewish holy sites in the “Jewish Quarter.”

The Obama directed vote was not a surprise, his eight years in the White House showed him to be the most anti-Israel President of the United States since the modern state of Israel was created in 1948.

Similarly, President Trump’s veto in the UNSC and his announcement about Jerusalem earlier this month, doesn’t elicit surprise. If he continues with the type of policies shown during his first year in the White House, President Trump will be most pro-Israel president since 1948.

President Trump was in office for less than three weeks when he began to show there was a new Middle East sheriff in town.  He released a statement released in February that was unusual for what it said:

“The American desire for peace between the Israelis and the Palestinians has remained unchanged for 50 years. While we don’t believe the existence of settlements is an impediment to peace, the construction of new settlements or the expansion of existing settlements beyond their current borders may not be helpful in achieving that goal. As the President has expressed many times, he hopes to achieve peace throughout the Middle East region. The Trump administration has not taken an official position on settlement activity and looks forward to continuing discussions, including with Prime Minister Netanyahu when he visits with President Trump later this month.”

Obama felt so strongly settlements were an impediment to peace that he made it a bigger issue than the Palestinians did, and 2009 broke an agreement between Israel and the U.S. that allowed Israel to build in existing settlements as long as no new land was taken.

Later that same February as Trump’s settlement statement, Nikki Haley put the UN on notice about the Jewish State:

In May 2017, President Trump did something else no American president had done before, he visited Israel as part of his first trip outside the country since he took office. Additionally, Trump’s commute from Riyadh, the first country of his Middle East trip visit was the first publicly reported airplane trip directly from Saudi Arabia to Israel.

During his trip, Trump visited the old city of Jerusalem, he went to the Church of the Holy Sepulcher which is recognized by Christians as the place where Jesus was Crucified. From there he walked to the Kotel, the Western retaining wall for the Temple Mount, just below the holiest spot in all of Judaism. No other American President had visited the Kotel while in office because the visit could be seen as a de facto acceptance of Israel’s control of the holy site.

In another first during his trip, Trump took the opportunity to publicly rebuke Palestinian President Abbas for his support of terrorists and payments to terrorist families:

“Peace can never take root in an environment where violence is tolerated, funded and even rewarded.  We must be resolute in condemning such acts in a single, unified voice.  Peace is a choice we must make each day — and the United States is here to help make that dream possible for young Jewish, Christian and Muslim children all across the region.  In so doing, we will all enjoy a safer and brighter future, and a safer and brighter world.”

As the year was drawing to a close the president made his Jerusalem announcement, “I have determined that it is time to officially recognize Jerusalem as the capital of Israel.”

Liberal Jews along with many in the mainstream treated the announcement as if it would bring the end of the world. Sadly, there has been some violence, but thankfully not at the predicted levels. Some Journalists who rushed to Jerusalem after Trump’s announcement to report on the major violence are returning home without a story.

On the third day of this year’s Chanukah a White House official was quoted as saying:

“We cannot envision any situation under which the Western Wall would not be part of Israel. But as the president said, the specific boundaries of sovereignty of Israel are going to be part of the final status agreement.”

Wow, that more than doubles down on the President’s Jerusalem Statement.

Today President Trump will bring up Israel during his speech outlining America’s national security policy, and in another change from a year ago, this president will not blame the Jewish State for all the world’s problems. According to the AP:

The strategy document asserts that “for generations the conflict between Israel and the Palestinians has been understood as the prime irritant preventing peace and prosperity in the region. Today, the threats from radical jihadist terrorist organizations and the threat from Iran are creating the realization that Israel is not the cause of the region’s problems. States have increasingly found common interests with Israel in confronting common threats.”

That would never have been said a year ago.

Chanukah in 2016 was melancholy,  in one of his last acts as President Barack Obama took the opportunity to stab Israel in the back one last time. But this year is much different. President Trump has kept his campaign promises by executing policies showing him to be a true friend of Israel. And today he vetoed an anti-Israel UNSC resolution.

From Chanukah to Chanukah, what a difference a year makes.