Did Walker Dump Trump Ahead of Peach State Runoff Race?

The Party Asked Trump To Stay Away 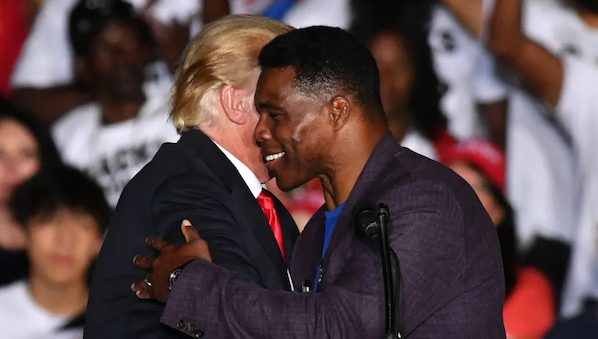 While much of the Republican Party has been attempting to spin the results of the midterm election to their liking (and throwing more figurative fuel on the divisive fire burning at the heart of the GOP), former President and who some consider the presumptive 2024 nominee Donald Trump has been thrust directly into the center of the fracas.

Some “old guard” Republicans are attempting to cast a pall of the blame on Trump for what they see as meager midterm results, while others are suggesting that a more emphatic embrace of the former President would have netted a far better outcome.

In Georgia, where there is still a Senate run-off race in the works, Trump has apparently become a persona non grata.

Former President Donald Trump will not hold a rally in Georgia for Herschel Walker before next week’s runoff election against incumbent Sen. Raphael Warnock (D-GA).

Just how bad are things?

According to Michael Bender of the New York Times, Trump will avoid the state after his team agreed with Georgia Republicans the former President might not only motivate Democrats to get out and vote but could also end up suppressing turnout among moderate Republicans:

“The decision to keep Mr. Trump out of the spotlight was a response largely to the former president’s political style and image, which can energize his core supporters but also motivate Democratic voters and turn off significant segments of moderate Republicans.

In Georgia, that political math has become a net deficit for Mr. Trump, who opened his 2024 presidential campaign two weeks ago. In 2020, he was the first Republican presidential candidate to lose the state in 28 years. Earlier this year, his handpicked primary challengers to Gov. Brian Kemp and Secretary of State Brad Raffensperger were both trounced.”

Trump’s early entry into the 2024 race has already helped him gather a great deal of political gravity, but it isn’t entirely the good kind.