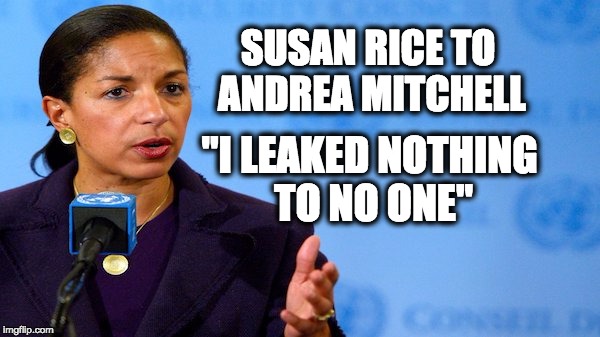 Susan Rice is very lucky she was interviewed by MSNBC’s Andrea Mitchell instead of a reporter that cared more about the truth than protecting the Democratic Party. Interviewed on Tuesday by the MSNBC anchor, Rice admitted she sought to unmask the names of people in intelligence reports as part of her job. Which seemed to differ from what she told Judy Woodruff on PBS two weeks ago that she had no idea about the unmasking that Rep. Nunes was talking about.

In Tuesday’s interview perhaps because she believes in protecting Democrats as opposed to finding out the truth, like a real reporter, Ms Mitchell didn’t ask her about the apparent contradiction between not having any idea as she said two weeks ago and knowing about it today. Especially when Andrea Mitchell fed her excuses:

Mitchell: “At the same time, the President, his associates, their names could have been bandied about by foreign officials, they could have been picked up in incidental collection.”

Rice: “Yes, they could have. That is possible.”

Mitchell “And you could have asked for those names of American number one, American number two, however it is identified, to be unmasked so you would know how significant it was?”

Rice: “That is exactly right, Andrea. The fact is whether we’re talking about Russia or any other topic, if I saw an intelligence report that looked potentially significant, and by definition, if it is being provided to me, it is significant, I don’t solicit reports. I only receive what the intelligence community thinks I or any other senior official needs to see. So they’re giving it to me. If I read it, and I think that in order for me to understand is it significant or not so significant, I need to understand who the U.S. person is, I can make that request. The intelligence community then processes that request through their normal procedures. And if they feel like they can give an answer, they will give the answer. That just comes back to me, not to anybody broadly in the national security world, and that is necessary for me to do my job. It is necessary for the secretary of state, or the secretary of defense, or the CIA director to do their jobs. We can’t be passive consumers of this information and do our jobs effectively to protect the American people. Imagine if we saw something of grave significance that involved Russia or China or anybody else interfering in our political process and we needed to understand the significance of that. For us not to try to understand it would be dereliction of duty

Notice she didn’t say yes or no she said…oh yeah Andrea…that could have happened.  Of course according to reports the unmasking had nothing to do with Russia so the Andrea Mitchel excuse doesn’t work.

Mitchell: “The incidental collection of these names that he was briefed when he came to the White House, in the complex of offices you used to lead at the National Security Council, he said that had nothing to do with the Russia investigation. Yet now, the allegation is that you were responsible for leaking the fact that Mike Flynn had talked to Ambassador Kislyak and perhaps to others. Is there any truth to that?”

Rice: “I can’t get into any specific reports. I don’t know what Devin Nunes reviewed at the White House. What I can say is that there is an established process for senior national security officials to ask for the identity of U.S. persons in this report. Beyond that, Andrea, is to disclose classified information and those people who are doing that are doing something very wrong.”

Now later she did say “I leaked nothing to nobody” (if her elementary school teacher heard that double negative she would have had a heart attack). Did she mean that she didn’t leak nothing to any person but she leaked a lot to everyone, or did she mean she didn’t leak anything to anybody?  Assuming she meant the latter, even on that account Mitchell didn’t do the correct follow-up. Leaving out important questions like, “Did anybody else leak it?” “Who else had the information, was it possible that they leaked the info?

Rice did say unmasked others and that was part of her job and contends she never did it for political reasons.

“I receive those reports, as did each of those other officials, and there were occasions when I would receive a report when a U.S. person was referred to. Name not provided, just U.S. person,” Rice said. “And sometimes in that context, in order to understand the importance of the report and understand its significance, it was necessary to find out who that U.S. person was.”

It seems strange that it would be the top person requesting and examining the unmasking, but perhaps that is normal procedure. What can be proven is that the person who appeared on four Sunday News programs the same day and lied to America about Benghazi, blaming the attack on a video, is telling inconsistent tales about unmasking.

And today when she says didn’t leak “nothing to nobody” can we really believe her? Maybe that’s why she allowed Andrea Mitchell to interview her instead of a real reporter.

In the end, Susan Rice probably raised more questions today than provided answers (she didn’t answer no questions for nobody?)

Watch the video below of her Andrea Mitchell interview and you decide.