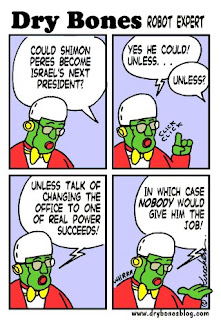 According to a report created by the Free Jonathan Pollard Committee and turned over to the Knesset, Shimon Peres was very involved in the arrest of Jonathan Pollard. According to the papers, Peres even turned over the evidence used to convict Pollard to US authorities. If this information is true, Peres’ bid to be the President of Israel should not only be rejected but he should be thrown into jail until Pollard is freed.

As ususal Mr. Bones gets it exactly right, because even if Peres is not guilty of this heinous act he should not be Israels next Pres. Click on the cartoon to see more of Dry Bones excellent commentary.

Dossier drafted by Free Pollard Committee says during his tenure as prime minister vice premier transferred to US documents that led to spy’s conviction; in letter to MK’s group members urge legislators to think twice before voting for Peres in presidential race
Sharon Roffe-Ofir

Members of the Free Jonathan Pollard Committee submitted to the Knesset a dossier claiming that during his tenure as prime minister Vice Premier Shimon Peres knowingly transferred to then US Secretary of State George Shultz documents that led to the American spy’s conviction.

The file was sent to the Knesset following Peres’ announcement that he would run for president.

“This was the only case in the history of modern espionage in which a prime minister directly assisted in incriminating an agent who acted on behalf of the country he headed,” the dossier said.

In a letter attached to the file the committee members said, “In light of Peres’ decision to run for president of the State of Israel, we feel an obligation to present this report to you. Peres said his election would bring the presidency the dignity and status it deserves, but we are certain that after reading the material you will reach the exact opposite conclusion.”

According to the dossier, on the night of Pollard’s arrest Shultz phoned Peres, who “didn’t accept responsibility and claimed he had no knowledge of the agent’s actions”.

“Peres is the one who gave the Defense Ministry the order to relay the documents – these documents had Pollard’s fingerprints on them and were used to incriminate him,” Pollard’s long-time attorney Larry Dub said.

Peres’ conduct in the affair was also criticized in a report drafted by a commission set up to investigate the spy’s arrest.

“Prime Minister Shimon Peres’ agreeing to return the documents that were brought in by Pollard was mistaken and caused severe damage,” the report said. “These documents served as the basis for Pollard’s conviction and the harsh sentence he received – life in prison.

However, the report said, the Americans promised Israel that the documents would not be used in the case against Pollard.

“If in fact the Americans promised not to use the documents, why didn’t we hear the State of Israel and the man who headed the country at the time, Mr Peres, cry out against the breach of the agreement?” Dub said.

In a recent appeal to the High Court of Justice Pollard claimed the court must order Israel to pressure the Americans into annulling his conviction over the breach of the agreement between the countries.

“To our surprise, during the trial the State claimed that no clear statement was made proving such an agreement ever existed,” Dub said.

The committee said in the letter, “It is important that Knesset members who intend to vote for Peres for the role of president think for a moment who they are voting for; it is inconceivable that Peres act as president before Pollard is released.”