The Lid Hosts The Schaftlein Report: Did Orwell Get the Year Wrong? 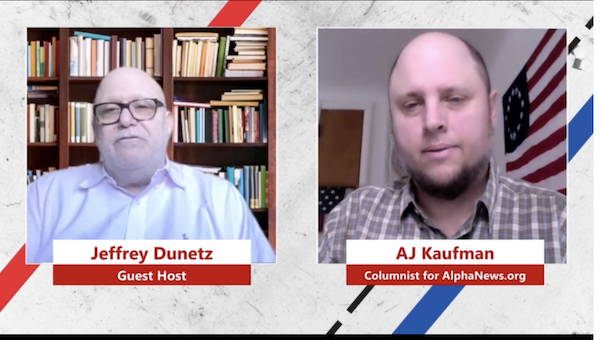 did Orwell get the year wrong

On Thurs, Jeff Dunetz, The Lid, had the opportunity to host the Schaftlein Report  The Lid has the honor to be Marks’s guest every Thursday, but this week Mark had some important business and asked me to host. So as I took over his role as host and taking over my role as the Thursday guest was A.J. Kaufman, a regular columnist for Alpha News and sometimes columnist here at The Lid.

Thursday was an incredibly busy news day. Seemingly much of the news was related to the government trying to take over Americans’ lives—more than usual. Thus the theme, ” In his novel 1984, George Orwell got the story right, but he got the date was wrong.

1 GDP- Unexpectedly, the First quarter’s Gross Domestic Product declined by 1.4%. The projection was a slight contraction. The definition of recession is a contraction of the economy in two straight quarters. Now that we have had one quarter, what’s next?  Should we be worried about what the govt. will do to delay a recession till after the mid-term election? The Fed announced a 50-basis point rise in interest rates. But will they slam on the brakes harder?  There are rumors that instead of 50 basis points, the interest rates will be raised by 75 basis points.

2 The Ministry of Truth? DHS Secretary Mayorkas testified to the House Oversight Committee. He announced that the Dept. of Homeland Security had created the ‘Disinformation Governance Board.” It sure sounds like 1984’s Ministry of Truth. And who decides what disinformation is? The disinformation board is led by Nina Jankowicz. She’s a Russia expert who called Hunter’s laptop a ‘Trump campaign product” and just last week said she ‘shudders to think’ about Elon Musk taking over Twitter. It doesn’t seem like she ( or Mayorkas) ever read the First Amendment, which guarantees all speech, whether it supports or opposes your position.

3 At the same hearing, Secretary Mayorkas said the Biden admin has ‘effectively managed’  the border crisis and added that he inherited a broken border security system. Message to anyone who believes Mayorkas, I have a nice bridge in Brooklyn to sell you—cheap.

4 Canceling student debt. Paying off student loans has been delayed since the peak of COVID. The present delay will end Aug 31, and the scuttlebutt is that it will be something closer to a complete cancellation is becoming more likely. In other words, along with paying for my kid’s college, I will be paying for other people’s kid’s college. And nothing helps inflation more than adding more “free stuff” to the economy. Why the push now? Just look at the polls. And be surprised when you hear us discuss the anti-Democratic Party way the money will be distributed.

5 Ohio Senate race-Republican primary race seems to be crowded. Ari has a big article coming out about the primary at Alpha over the weekend and gives us a preview.

6 Musk buying Twitter, and the liberals are still going frothing from their mouths mad. One of the liberal straw dogs is asking whether rich people should be allowed to own media? We discuss their REAL objection to the Musk purchase and ask why people use Twitter anyway?

7 The Governor vs. Mickey Mouse. DeSantis Already Won the Battle with Disney; Should he quit while ahead?

No matter who’s the guest, you will enjoy tuning into the Schaftein Report every Mon-Thurs. You find the latest episodes with videos on the show’s website https://schaftleinreport.com/ and the Schaftlein Report’s Facebook page, which can be found here. Also, you can listen to every show on Apple Podcasts here, Audible Podcasts by clicking here, or iHeart Radio at this URL.

Enjoy Thursday’s show by watching the video below. Next week Mark is back, and on Thursday I will be back as a guest.

did Orwell get the year wrong