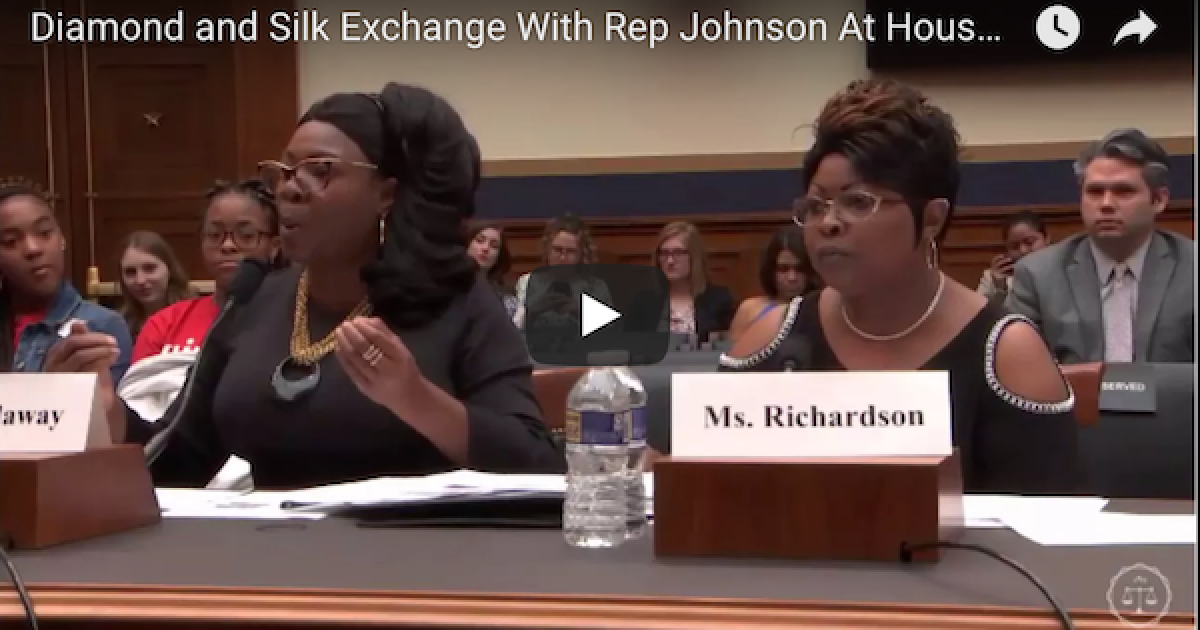 Democrat Hank Johnson (D-GA), famous for asking if too many marines would make the Island of Guam tip over, had an opportunity to talk to Facebook personalities Diamond and Silk on Thursday, during a hearing on web censorship.

Instead of taking the opportunity seriously and trying to understand what it’s like to be censored by the tech giants (Facebook, Google, YouTube, Twitter, etc), Johnson instead chose to go on the attack and pester the two women about making money with their videos. (As if this is somehow wrong, or even controversial?)

Thankfully, the ladies were not going to allow Johnson to get away with marginalizing them for being intelligent capitalists, and they fired back at him! They explained to Johnson that how they made money didn’t matter – the real problem was that they were being silenced by Facebook and YouTube and that if they were liberals having their freedom of speech stifled the Democrats would be raising Holy Hell to complain about the censorship.

But what we are dealing with today, we are giving a platform to Diamond and Silk.

You ladies are very impressive to me, you have taken something and moved forward with it, exercising your first amendment rights, and you’ve made a ton of money off Facebook, is that correct?

Diamond: Absolutely not. Facebook censored us for six months.

Hank Johnson: Donald Trump introduced you all at a rally last year, and he introduced you saying you were very popular and had made a ton of money based on your affiliation with him.

Diamond: Let me tell you what he was talking about. He was calling on those things that was not as though they were…

Hank Johnson: The point I’m trying to make is you all have been bashing Facebook and you’ve been making a ton of money, isn’t that correct?

Silk: They deemed us “unsafe to the community” and —

Diamond: What we did — we didn’t bash Facebook. We brought the light on how Facebook has been censoring conservative voices like ours… They won’t let us monetize on Facebook. They stopped it for six months, 29 days. They limited our page.

Silk: And Youtube did also by demonetizing 95% of our videos for no reason at all, deeming it as hate speech, however all my to say —

Diamond: Even if we sell merchandise that don’t have nothing to do with Facebook. Facebook censored our free speech and shame on the ones that don’t even see that we have been censored.

Yet, when the Black Lives Matter people come in, everyone is up in arms. Let me just say this here, if the shoe was on the other foot and Mark Zuckerberg was a conservative, and we were liberals, oh all fences and all chains would have broke loose. You know it and I know it. What I find appalling is these Democrats don’t want to take up for our voice because we support the president.

Diamond and Silk also delivered an eloquent 5-minute opening reminding all Americans that our free speech was at stake in this fight.