The NOT Dangerous Diamond And Silk Fight Back Against Facebook Attack 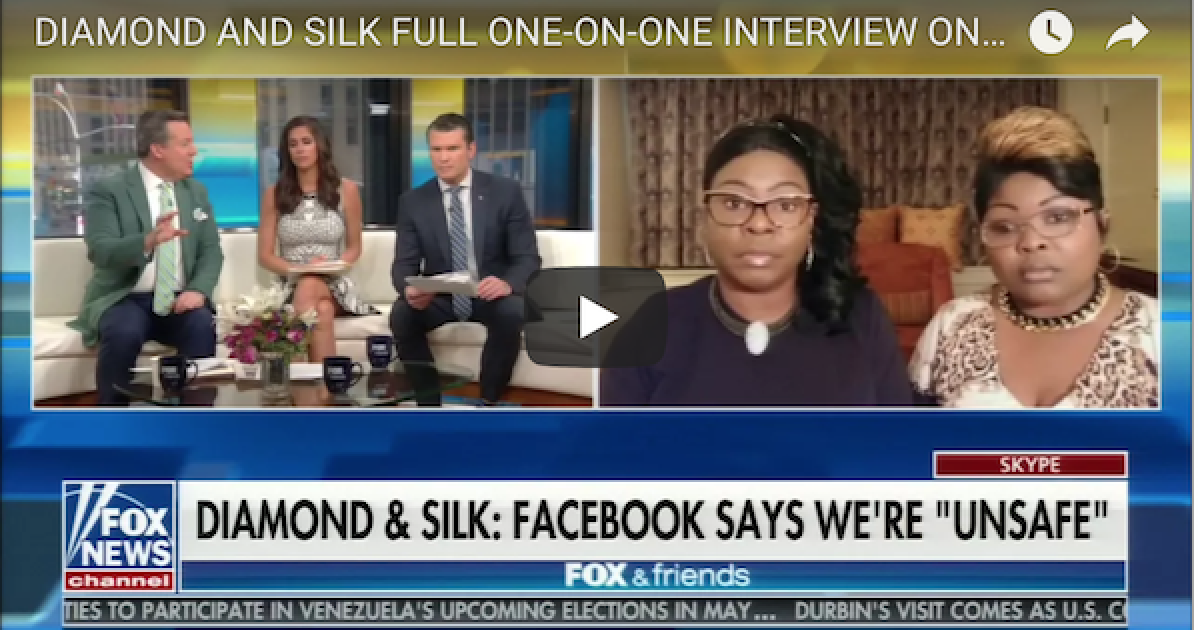 As we and others reported Saturday, Facebook, the social media giant once dubbed the “world’s most dangerous censor,” told the outspoken pro-Trump duo Diamond and Silk that their content was “dangerous” to their community. If you are familiar with Diamond and Silk you will realize how ignorant that charge is. If you aren’t familiar with the two, a link to their facebook page and videos are at the end of this post and I suggest you go enjoy.

“How are we unsafe to the community,” they asked, telling Fox that they don’t sell drugs and don’t belong to a gang.

They asked why the social media giant is censoring two women even as the company claims to be for women.

According to the two women, they began seeing a drop in traffic and received emails from supporters wondering why their content wasn’t being seen.

After several months, they said the company finally responded, telling them they’re “dangerous to the community.”

When asked why they think this happened, they minced no words, saying Facebook now “wants to be a dictator” letting only certain content be seen.

.@DiamondandSilk: “If a privately owned bakery has to go against their Christian values to bake a cake, then Mark Zuckerberg is going to have to suck it up buttercup and allow Diamond and Silk to speak our truth.” pic.twitter.com/LnukaSjwD4

Yes I have a feeling they have a lawsuit. Seems highly unfair & unequal to me. Discrimination against different views. Where’s the ACLU?

censorship on social media is an extension of neo-progressive control over free speech. #neoprogressivism

It’s actually much worse than that, as we’ve reported here time and again.

In 2015, for example, yours truly was repeatedly banned over posts that were forged to appear as though I had made them.  That seven-month excursion into Facebook Hell was partly the inspiration behind “Banned: How Facebook enables militant Islamic jihad,” a book written by myself and American-Israeli Adina Kutnicki.

Many others have experienced Facebook’s wrath.  One conservative user was told that her profile picture of a lilac tree was “pornographic,” and another user was told that a 2012 Trump campaign button that only showed his face violated rules against nudity.  An entire pro-Trump page was yanked after several false claims of nudity.

Now it appears that the world’s largest social media platform is engaging in what can only be described as a holy war — a jihad, if you will — against anyone whose views fall somewhere to the right of center.

That’s happened to others as we reported here.  The ban was eventually lifted, but the damage was already done.

Love the “face without the book”!! Facebook is blocking everyone from the right. In Brazil they blocked the most popular presidential candidate from the right (Jair Bolsonaro). @FoxNews I challenge you to investigate how FB is destroying the right and killing democracy????

There have already been two studies conducted on that very subject as we noted here and here.  Those studies indicated that Facebook’s most recent algorithm change severely hampered conservative sites while giving a boost to more liberal outlets like CNN.

The real challenge should be laid at the feet of congressional Republicans:  Will they finally take action to rein in out-of-control social media companies before it’s too late?

On Friday, Fox’s Dana Perino interviewed Facebook COO Sheryl Sandberg (who is also Mark Zuckerberg’s sister). She claimed that all of the recent algorithm changes hurt both liberal and conservative websites–she lied and sadly Dana didn’t have the facts to dispute her lie.

Facebook’s censorship of conservatives is very real and has affected this and other websites. Now that they have attacked Diamond and Silk with over a million Facebook followers and a gig at Fox New, they may finally get a counterattack that will make them hurt.

BTW if you haven’t seen the pair yet, I suggest you go to their facebook page enjoy what they’ve posted and give it a like. You can find it a https://www.facebook.com/DiamondandSilk