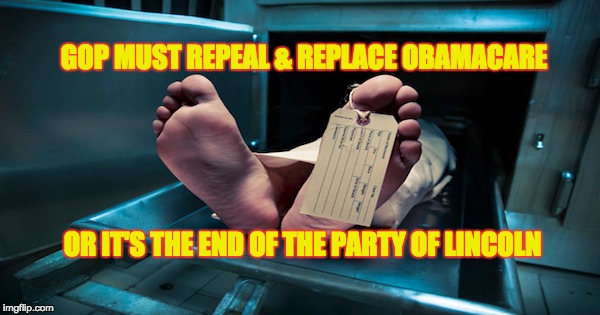 Trump was made president of the United States based on several issues. He was against illegal aliens infesting the U.S.A. and for building a wall on the southern border, he was in favor of lowering taxes and re-building the economy, he was pro-U.S.A. (i.e. “make America great again”), and he was going to end Obamacare.

On the latter issue, the Republican Party stood fully behind Trump and have for several years now said they, too, want to put an end to one of the worst, most destructive laws ever to ooze out of D.C. But, now, only a month into the era of Trump, now that they are fully in charge and have a president ready to join the effort to quash the socialist take over of one sixth of the nation’s economy, we have already seen they are losing their spine on the matter.

Despite so many who are crowing that the Democrat Party is dead — and, yes, they are in the worst shape they’ve ever been in — and despite those who assume Democrats are now in the permanent wilderness, it is idiotic to assume the Dems are down and out. The fact is, right this minute the GOP has more power than it has had in generations and now is the time to act on Obamacare. We can’t expect the GOP to ever be in a better place to put an end to President Obama’s signature nightmare.

To their credit — and just, at that — many Republicans do understand that Obamacre needs to be eliminated. Remember, many Republicans were heard claiming that repealing Obamacare would be a “day one” task. And on that subject, Trump did, indeed, make a “day one” move to begin the rollback of Obama’s law. Hours after taking office, Trump signed an Executive Order instructing federal agencies to grant relief to Americans negatively affected by the Affordable Care Act (ACA).

But, Executive Orders are not “laws” passed by Congress nor do they have the full force of law. We need to have Congress move to end the law. Yes, Republican leaders in Congress have continually mouthed their desire to end Obamacare in line with Trump’s campaign promises. The media is full of these pronouncements.

For instance, last year, when Speaker of the House Paul Ryan was not able to muster enough votes to override Obama’s veto of a bill designed to begin dismantling Obamacare, Ryan insisted that if a Republican were to win the White House, they would still do it.

“We have now forged a path — that is a clear path — to repealing Obamacare without 60 votes in the Senate. So what we are proving today is if we have a Republican president next year, we will repeal Obamacare. And we will replace Obamacare,” Ryan said at a press conference in February of last year after the vote to override Obama’s veto failed.

Just before Donald Trump was inaugurated as our 45th president, Senate Majority Leader Mitch McConnell also ripped into Obamacare, said it has failed America, and promised to dump it.

“The Senate is currently working to pass the legislative tools to bring relief to the middle class by repealing this partisan law,” McConnell said of Obamacare in an op-ed January 9.

“We’re acting quickly because ObamaCare is collapsing under its own weight, and things will continue to get worse otherwise. That doesn’t mean the law will end overnight. There will be a stable transition period, and once repeal is passed we will turn to replacement policies that cost less and work better than what we have now,” McConnell promised.

Sadly, there has been much talk but little concrete action.

Indeed, there are hints all over the media that the Republican Party is backing down from concrete action as fast as they rush to microphones to claim otherwise.

For instance, only about a week before his inauguration, Trump was listening to Kentucky Republican, Senator Rand Paul, who was already cautioning that the party should slow down of the repealing of Obamacre until there was a “replacement” ready for introduction.

Now, before I go on, if you don’t believe that the GOP has several replacement bills already written, then you are a fool. Rand Paul has probably even been part of the drafting of at least one of them. So, there is no reason to wait for some mythical bill to be “written.” There are several to choose from already. Just frikkin pick one and go!

Even conservative Senator Tom Cotton (R-Ark) has been blathering about waiting until a “replacement” is ready.

And orange-faced former House Speaker John Boehner is even back in the media insisting that the GOP will never repeal Obamacare. Just last week Boehner claimed “it is not going to happen.”

Notice what all this means? It means that Republicans are looking for a reason to tell voters that they aren’t ready to fight to repeal Obamacare.

This “let’s wait and see” attitude is a common refrain in Washington belched out by Republicans who are looking for ways to avoid doing what they promised or were elected to do. They’ve been throwing this line of nonsense around for decades. The GOP said they couldn’t reign in government, lower taxes, or fight Obama because they didn’t have the House of Representatives. Then they got the House. After that they said now wasn’t the time to fight for anything because the GOP didn’t control the Senate. Then they got the Senate. Then they said they couldn’t forge ahead because Obama was president and they needed a Republican in the White House. Then Trump won. Today they have no excuse not to plow ahead… but what are they saying? They are saying now is not the time to fight. Now is the time to cool our jets and slow things down.

This never, ever happens when Democrats are in power. When Democrats are in power they launch into their agenda with full steam ahead quite regardless of whether or not they have an electoral “mandate.” Sadly, the Republican Party hasn’t had the spine to lead since it finally lost its post civil war lock on power when the socialist FDR era finally sent them packing.

Like I said, the GOP should assume that it will never have this much power agin and at light speed they should sweep the Democrats and their legacy into the wastebasket of history with all haste. Not only is it what the Democrats would do — and have done decade after decade — but it is exactly what Republicans were sent to Washington to do.

Right now the Republican Party has a very weak coalition despite the cliff the Democrats fell off of. The GOP is at an uneasy crossroads between its weakling, past self, and its possible new, stronger self led by Trump. But right now it does not have a successful identity and if it slows Trump down and refuses to repeal Obamacare, refuses to lower taxes and improve our economy, won’t vote to build the wall, or won’t work to pass any of Trump’s main agenda, then it will not succeed. It will instead give the undeserving, un-American Democrats an easy path right back to power.

By refusing to support Trump, the GOP will commit suicide.