Gov DeSantis Supporting Wife At Cancer Treatment: The Left Said He Was On Vacation 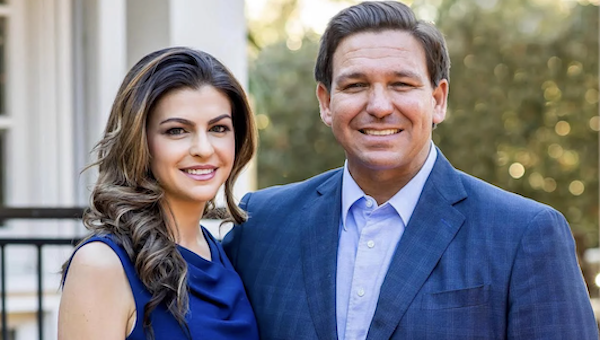 Florida Gov DeSantis accompanied his wife to her cancer treatment on December 29th, while the left accused him of shirking his responsibility and being on vacation.  They were going nuts, saying the Gov. was ignoring the needs of his state.  They were quick to trash DeSantis and didn’t try to find out that he was still working, although he didn’t make public appearances.  And on the day the left slammed DeSantis the most, he was with his wife giving her support.  DeSantis was supporting his wife

Florida recently saw a spike in Omicron COVID cases.  As DeSantis is running for reflection.  The vote is in eleven months, liberals were looking for ways to attack the governor, and they found one–a false one.

Some of the worst offenders were:

AOC (D-NY), who left her district that was being overwhelmed by Omicron to go on a maskless vacation in Miami, also attacked DeSantis:

Hasn’t Gov. DeSantis been inexplicably missing for like 2 weeks? If he’s around, I would be happy to say hello. His social media team seems to have been posting old photos for weeks. In the meantime, perhaps I could help with local organizing. Folks are quite receptive here 🙂

The NY Congresswoman followed up by saying Republicans criticized her because they wanted to date her and projected their sexual frustration.

MSNBC’s chief hatemonger Joy Reid was the jackass that broke the camel’s back.  Team DeSantis responded to her tweet with proof the governor was having meetings despite the lack of public appearance.

Have you ever considered that you’re one of the reasons nobody trusts the media? pic.twitter.com/nyiqzstZhT

Some on the left said they were told by team DeSantis that he was on vacation.  That was quickly shown to be a lie.

Just FYI, @GovRonDeSantis is not on vacation. Literally no one from our office has said that he is. Anyone pushing that could have easily seen the public schedule and seen that he's taking calls and meetings this past week. Not having public events does not = "vacation"

That he was working despite not making public appearances was the least important part of the story.  In October, the Florida Governor announced that his beloved wife and FL First Lady Casey DeSantis was diagnosed with breast cancer.

On December 29th, when many of the liberals spewed some of their most vile criticism of the governor, he was accompanying his wife for cancer treatment.

I wonder which of those critics wouldn’t go with their significant other if they were getting treatment for cancer.  Hopefully, they will never have to deal with it, but if they have to deal with a loved one sick with cancer and didn’t go and support them while receiving treatment, they would be considered less than human.

Many of the liberal critics of DeSantis did not know what he was doing, as it was first announced publicly on Saturday, January 1st —but they didn’t bother to ask either.  They were too busy rushing to trash the Republican.  And since they found out he was supporting his wife, not one has apologized.  Liberals don’t apologize.  They just ask others to apologize.

DeSantis was supporting his wife