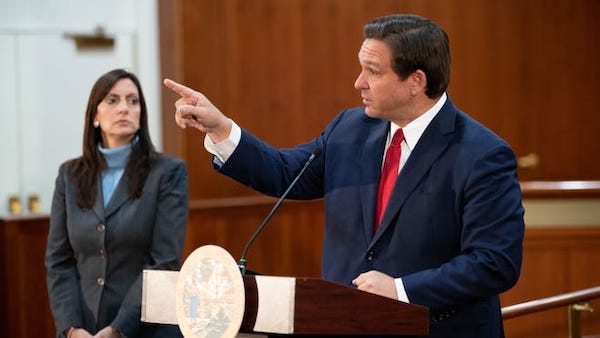 DeSantis has become one of the few bright spots in the Republican Party in how well he has handled his state during the Coronavirus pandemic. And he hit just the right note of this new move by corporate America to try and forced hard-core leftism on Americans by illicit economic warfare.

The Florida governor said U.S. corporations are acting like hypocrites for saying that “you can’t have a photo ID in Georgia” while at the same time “doing business with the Chinese Communist Party” and refusing to help fight “slave labor” in China.

He also slammed Major League Baseball for “hobnobbing with the Castro regime” even as they pulled their All-Star Game from Georgia.

“You have an aggressive, woke, ideological left” taking over American corporations. They have adopted “fact-free narratives” that Big Tech then amplifies, DeSantis said after attending a round table on COVID-19 with experts from Harvard and Stanford medical schools. “That is not the way we want this done in Florida.”

“When you politicize every aspect of our lives,” DeSantis exclaimed, “that exacerbates and contributes to polarization and divisions.”

These corporations fully intend to make an end-run around our elected officials.

This is the real danger the west faces, folks. We have mostly seen that the world’s governments mouth the leftist, unproven climate change hypothesis But they aren’t willing to bend backward and destroy themselves for the hypothesis.

Because of that, climate change alarmists are now working on co-opting the business community to force the dangerous, left-wing ideas of climate change on us by fiat.

Why would these corporations agree to this? Because they expect the green new deal-ists will destroy all their smaller competition, and they will be left to rule.

It not about the climate, folks. It is about control.