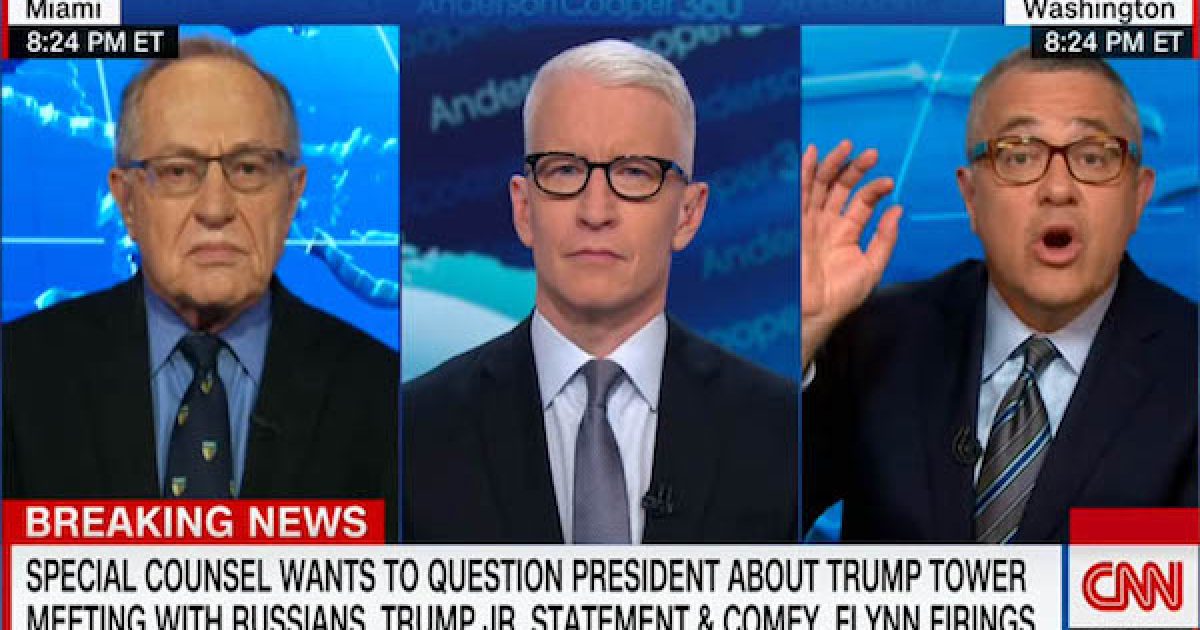 Over thirty years ago CNN legal analyst Jeffrey Toobin was a student of Alan Dershowitz at Harvard Law School. Dershowitz is still teaching Toobin, he delivered devastating verbal blows at the CNN analyst for letting bias cloud his opinions when the two appeared with Anderson Cooper.

Jeffrey Toobin has long been a darling of the left. Whether it was his attacks on George W. Bush or his defense of Obama, Toobin could be counted on to deliver a biased perspective of the impact of the law on the day’s news as possible, day in and day out.

The election of President Trump hasn’t changed any of that. In fact, it’s likely made Toobin even more vocal about his support of left-leaning legal philosophy (which is to say – the law says whatever liberals need it to say at any given point in time).

However, he finally met his match in a recent debate with his old law professor, and another leftist lawyer, Alan Dershowitz.

The two men were on CNN with Anderson Cooper, when the student blasted his former mentor for “carrying water” for Donald Trump.

Dershowitz did not let the attack go unanswered and he responded by pointing out that on the issue they were debating he had always been consistent, whether he was making the argument for his good friend Bill Clinton or for Donald Trump.

Dershowitz then pushed further and argued that it was lawyers like Toobin and other liberal media analysts who had decided to change their views on things, not because of the law, but because of their anti-Trump bias.

Dershowitz decimates Toobin and lays bare the hypocrisy of CNN’s Trump coverage… and he does it all while appearing on CNN.

Jeffrey Toobin: “How has this come about that in every situation over the past year you have been carrying water for Donald Trump? This is not who you used to be and you are doing this over and over again in situations that are just obviously ripe with conflict of interest. It’s just like, what’s happened to you?”

I’m not carrying any water.

I’m saying exactly the same thing I’ve said for 50 years and Jeffrey you ought to know that you were my student. I have never deviated from this.

I have never deviated from this point. The fact that it applies to Trump now rather than applying to Bill Clinton is why people like you have turned against me. Don’t you understand that principle requires bipartisanship and non-partisanship? And that’s who I am and have always been.”

Later Dershowitz piles it on and really knocks Toobin out:

“I have no interest in whether Donald Trump is exonerated or not. If the evidence is against him, I will be the first person to call him out on it. What you accuse me of is not being partisan. You want me to have a different standard against Donald Trump than I did in relation to the Clintons and with everybody else…I have been utterly and completely consistent and non-partisan and, Jeffrey, you haven’t.”