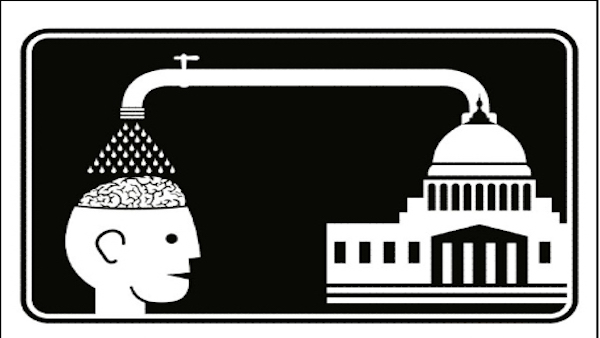 Brainwash! That’s what they want to do to us. Deranged liberals believe that they should be deprogramming Trump supporters

So let’s get this straight: David Atkins, an “elected DNC member,” from California who advocates deprogramming Trump supporters because we’re all a “conspiracy theory-fueled belligerent death cult.” I’ll admit to the Trump supporter part, but the rest of it is a complete lie and a dangerous one at that. And he is not alone in his hateful idea.

This is not your standard partisan policy disagreement. This is a conspiracy theory fueled belligerent death cult against reality & basic decency.

The only actual policy debates of note are happening within the dem coalition between left and center left.

Atkins is smoking too much weed, I’m afraid. He’s the one who hopped up on conspiracy theories. Everything he has stated is a total fabrication out of a very troubled mind.

i mean, for chrissakes, conservatives are literally giving themselves COVID just to own the libs. They're dying in COVID wards insisting they don't have COVID because it must be a liberal plot.

People are gonna try to figure out how to defend themselves.

And he is certainly not alone in his delusions. The threat to all Trump supporters by deranged liberals is real, not imaginary. Within these unhinged liberal tweets are threats even to our churches. Maybe we need to conduct deprogramming on liberals.

@LauraMiers tweeted: “Thank you for starting this conversation. Ignoring the propaganda and disinformation problem would be a grave mistake. We should already have a plan to combat it. Simply replacing the President does nothing. We need actual deprogramming efforts, & we should consult cult experts.”

@alovelily tweeted: “This would be a start. But there is a LOT beyond just Fox, Limbaugh, OAN, Parler, et. al. It’s in their churches. The theocratic and white supremacy creep are intertwined.”

James isn’t the sharpest crayon in the box. Fox News is a Cable Network—they don’t have nor do they need a broadcast license.

Erin, Esq tweeted: “I’m not sure how you do this with the 1A, but the German way has to be the way. Anti-democratic (small d) organizations have to be outlawed. Confederate insignia have to be outlawed. Much as some people like to pretend, more speech really isn’t the answer. It’s de-platforming.”

Remember back when Sanders was running for President, one of his campaign members suggested gulags to teach Republicans a lesson? So now they want to go full circle and plan a WWII-style German/Japanese method of deprogramming. They’ve already started their lists of people to punish, as we previously reported.

David Atkins was taken to task back in 2014 for tweeting that he couldn’t wait for white GOP members to die. (LA Times) He is an elected member of the Democrat party.

The problem exists in the narratives perpetuated by the leftist drivel in the mainstream media: all Republicans are white supremacists, all Trump supporters are Nazis, all white people are evil, etc.

Out of all the leftists responding to Mr. Atkins’ statement, one sane person stood out:

“You should really check yourself into a facility, David. You aren’t well at all and seem like a danger to yourself and others.” @MollyRatty