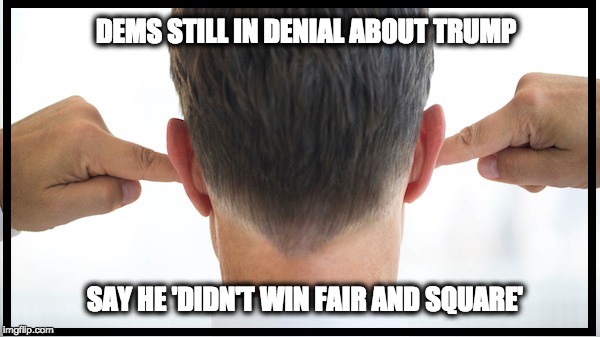 For the past six months since Donald Trump pulled out a surprise 2016 election victory over perceived shoe-in Hillary Rodham Clinton, Democrats have gone from disbelief to denial and have arrived at delusional, as a majority still believe that Trump did not win the presidency.

That was the result of a Rasmussen survey revealed Wednesday morning. The survey said 61 percent of identified Democrats “say it was not a fair win for Trump.”

On the other hand, 87 percent of Republicans think Trump won fairly in November, along with 59 percent of independents. Overall, the recent Rasmussen survey revealed that 55 percent of likely voters think Trump’s fall victory was legitimate.

Rasmussen Reports noted that just after the election, 67 percent of Republicans and 54 percent of independents were confident that the ballots were counted properly. Only 34 percent of Democrats believed that, and this new survey result confirms they still don’t.

There remains considerable rancor on Capitol Hill among Democrats who find any excuse possible to criticize and oppose the Trump agenda. The one exception came in the wake of the Syrian missile attack that Trump ordered launched in response to the apparent use of deadly gas on Syrian civilians last week.

Rasmussen, in a separate survey, found that most likely voters also support the missile strike. Fifty-seven percent of survey respondents back Trump’s decision, while 32 percent opposed the attack. Only 25 percent of those surveyed think more military action is warranted. Sixty-two percent believe the matter should now be handled by the United Nations, which typically translates to nothing.

Perhaps Democrats simply cannot accept that they are no longer in charge, same as in 1995, after Republicans took control of Congress with the “Contract With America.” Contributing significantly to that election outcome, same as in 2016, were the nation’s gun owners. In 1994, after passage of two major gun control measures – the 1993 Brady Handgun Act and the 1994 Clinton 10-year ban on so-called “assault weapons” – gun owners turned out in force.

In 1994 they derailed then-President Bill Clinton’s agenda and last fall they prevented Hillary Clinton from returning to the White House.