Dems Answer Bibi: F**k Israel! The Jews Will Vote For Us Anyway 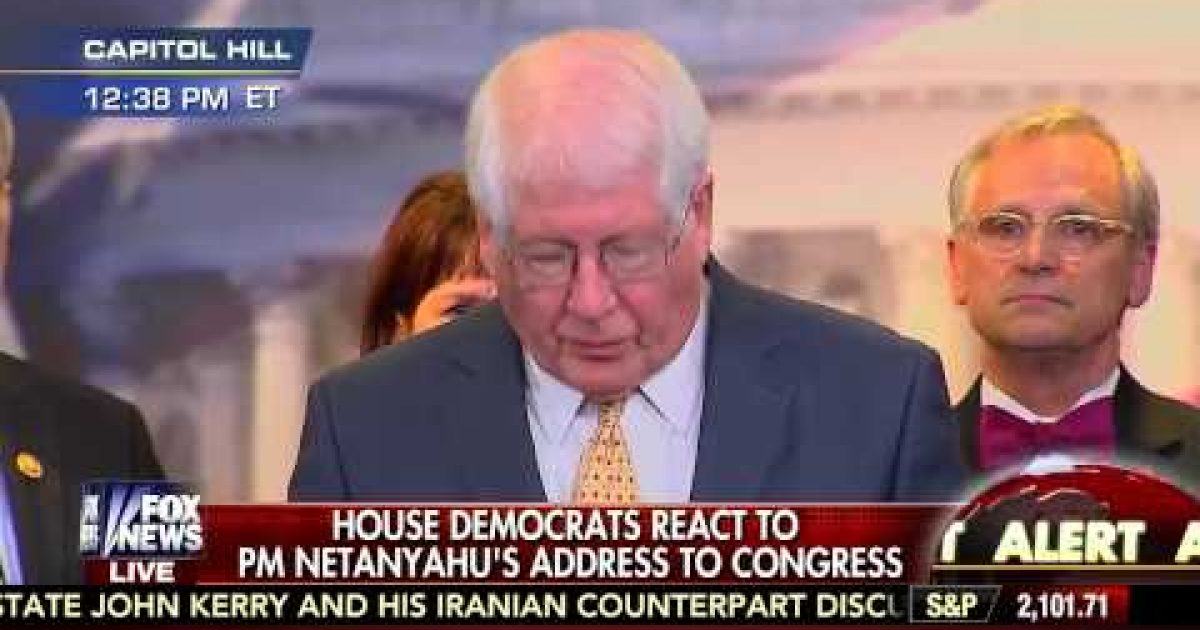 The Reaction from the Democrats was quick and vile, while the Prime Minister of Israel build a case about what was wrong with the proposed deal, the Democrats called him names, put words in his mouth saying things he didn’t say. The message was clear,”F**k Israel! the Jews will vote for us anyway.”

Not one recognized Iran was a existential threat to Israel and the Jewish people. It started with John Yarmuth (D-KY) who spoke first but there was a line of Democratic Party members waiting to attack Netanyahu after he was done:

“I would like to congratulate speaker Boehner and Prime Minister Netanyahu on a very impressive bit of political theater. Now the prime minister can go home to his campaign and say he lectured congress and the American people on things that apparently we didn’t know.”

But defying logic Yarmuth went ahead and listed things Netanyahu was lying about..despite the fact that he just said Bibi didn’t say anything he didn’t know about. He called the speech “straight out of the Dick Cheney playbook. It was mongering at its ultimate.” He ended with “Prime Minister Netanyahu basically said that the only acceptable deal was the perfect deal or an ideal deal. It’s like the child who says I want to go to Disneyland every day, eat ice cream and drink Coca-Cola every day and not going to school.” Actually Netanyahu didn’t say it had to be a perfect deal, he said it shouldn’t be a bad deal…something many in congress including Senator Menendez agree with.

Yarmuth turned the microphone over to David Price (D-NC) who observed that free speech is not allow in the US Congress:

And Prime Minister Netanyahu should not have accepted this invitation, which was extended without the usual consultation of bipartisan leadership and the normal notification of and consultation with the president. For these reasons, the invitation and the speech set a dangerous precedent wheres about congressional leaders can invite a foreign politician to publicly oppose the policies of the sitting president on the house floor. In doing so, we not only tarnish the grand tradition of the joint session.

Rep. John Lewis (D-Ga.) called the address “an affront to the president of the United States, to the Democratic leadership of Congress and the Department of State,” while Rep. Jan Schakowsky (D-Ill.) sought to throw doubt on Netanyahu’s security acumen by mocking his support for the Iraq War more than a decade ago.

Saddam Hussein’s removal would have “enormous positive reverberations on the region,” Netanyahu told Congress in 2002. “The big winner of the Iraq war was Iran,” Schakowsky said Tuesday. Perhaps she should tell that to all the members of congress who voted for the Iraq war (including John Kerry).

There was more to that line of Democratic hit men, but separately House Minority Leader Nancy Pelosi talked about almost being brought to crocodile tears. She released a statement saying:

That is why, as one who values the U.S. – Israel relationship, and loves Israel, I was near tears throughout the Prime Minister’s speech – saddened by the insult to the intelligence of the United States as part of the P5 +1 nations, and saddened by the condescension toward our knowledge of the threat posed by Iran and our broader commitment to preventing nuclear proliferation.

Even the Democratic Party media attacked. In the video below provided by Digitas Daily, we see Chris Matthews, Mr. Tinkle Down My Leg, get practically apoplectic about the Netanyahu speech.

These and other messages from Democratic sources were clear.  We only like Israel when Barack Obama likes Israel, we don’t care that the administration is making a bad deal with Iran. F**k Israel, no matter how we screw her, those Jews are going to vote for the Democrats anyway.