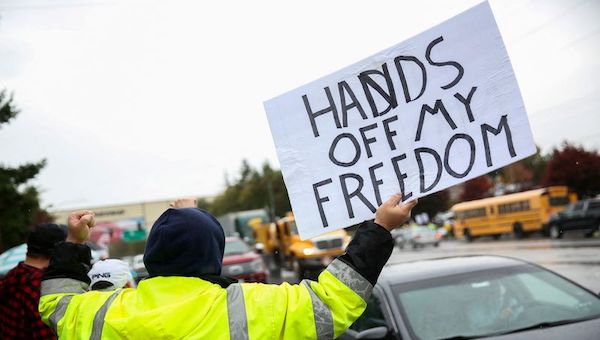 From the very start of the coronavirus pandemic, there was a small but determined group of worriers out there who believed that the government ay find ways to use this crisis to their advantage, particularly in the realm of potentially limiting the freedoms that Americans have long enjoyed. Democrats wish to ban unvaccinated

And while these concerned citizens were lambasted routinely for their beliefs, often being characterized as conspiracy theorists or kooks, the rampant discrimination that we’ve seen against the unvaccinated seems to suggest that there may be something to their worries yet.

The latest shocking twist comes to us in the form of a new poll that shows Democrats supporting the idea of barring unvaccinated Americans from public spaces.

A majority of Democrats would agree with the U.S. government taking more drastic coronavirus measures, such as confining unvaccinated Americans to their homes “at all times except for emergencies,” a Rasmussen Reports survey revealed.

The survey listed a series of potential coronavirus-related actions, gauging support for a series of penalties, including fines, stay at home orders, and designated facilities for the unvaccinated and critics of the vaccines.

“Would you strongly favor, somewhat favor, somewhat oppose or strongly oppose a proposal to limit the spread of the coronavirus by having federal or state governments require that citizens remain confined to their homes at all times, except for emergencies, if they refuse to get a COVID-19 vaccine?” the survey asked.

Respondents were also asked if they support or oppose a proposal for federal or state governments “to fine or imprison individuals who publicly question the efficacy of the existing COVID-19 vaccines on social media, television, radio, or in online or digital publications.” While the vast majority of Americans, 67 percent, said they opposed such a proposal, Democrats remain split, with 48 percent supporting fining vaccine critics and 46 opposing.

With the pandemic continuing to evolve in stranger ways, one has to wonder if there’s any end in sight for these discriminatory practices.

Jeff Note: As I’ve said before, I have had three pokes of the Pfizer vaccine, not because it prevents COVID, but it will lessen the effect of the virus. IMHO people should get vaxxed. However, programs like the above or the Biden mandates are disgusting and unAmerican. It is an individual’s choice whether or not to get vaxxed—not the government’s.