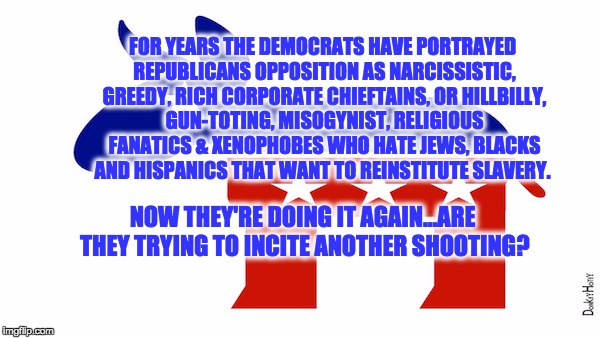 After the shooting of Steve Scalise, political leaders of both major parties urged the ending of hateful rhetoric political rhetoric. But as soon as senate Republicans introduced their draft healthcare bill,  Democrats forgot all about the “era of good feelings” after the Scalise shooting and used inflammatory hate rhetoric to fight against the GOP Healthcare bill.

Less than two weeks ago a crazed Republican-hater entered a park where the GOP members of congress were practicing for the annual congressional, baseball charity game scheduled for the next day. The intruder started shooting at the team wounding five, one of which was Rep. Steve Scalise (R-LA) who lingered near death for days and is now improving.

Many suggested the shooter James Hodgkinson was motivated to kill Republicans by years of hateful rhetoric spewed by Democratic party politicians. For years the Democrats have portrayed Republicans as rich, greedy, narcissistic, fat-cat, corporate chieftains and/or hillbilly, gun-toting, misogynist, xenophobic religious fanatics who hate Jews, Blacks, Hispanics, and want to reinstitute slavery. For example, pro-life Republicans aren’t characterized as anti-abortion they are described as conducting a war on women. Republicans that wanted America to control its borders were called anti-Hispanic, or the GOP members who called members of ISIS, radical Islamist terrorists were described as hating Muslims, etc.

But in the wake of the attack on the baseball team, and near death of their colleague Steve Scalise, members of congress on both sides of the aisle promised to tone down the hateful rhetoric. Of course, they still would disagree, but the official line of both parties was they would disagree without getting personal.

Any pretense of toning down the rhetoric ended on Thursday as the senate GOP release their version of a repeal/replace Obamacare bill. Within minutes of the bill being posted online the attacks began.  Many of them were hyperbolic charges that the Republican bill was going to murder people:

James Hodgkinson the shooter was a volunteer for the Bernie Sanders presidential campaign, and when the Vermont senator heard the shooter was associated with his effort, he was horrified and made a speech on the senate floor saying in part:

“I have just been informed that the alleged shooter at the Republican baseball practice is someone who apparently volunteered on my presidential campaign. I am sickened by this despicable act. Let me be as clear as I can be. Violence of any kind is unacceptable in our society and I condemn this action in the strongest possible terms.”

But that didn’t stop him spewing incendiary words about the GOP health care bill, “Let us be clear and this is not trying to be overly dramatic: Thousands of people will die if the Republican health care bill becomes law.

Connecticut’s stolen valor senator Richard Blumenthal tweeted, “Senate Republicans want to gut Medicaid – throwing children and families who rely on it to the wolves” and “The Republicans’ health care plan will literally cost American lives.” Blumenthal’s death talk couldn’t have come from memories of the senator’s service in Vietnam, because as you may remember while the Connecticut Democrat claimed to have served in that war, during his initial run for the Senate he was outed as a fraud.

Senator Elizabeth “Pocahontas” Warren (D-MA) claimed that the GOP were liars who are trying to fool women. She tweeted, “Women aren’t fools. We know the difference between reality & lies. That’s why we’re fighting back to stop the @SenateGOP healthcare bill.” She followed up by opining on the senate floor with, “How to pay for all these juicy tax cuts for their rich buddies?” she asked. “I’ll tell you how: Blood money.”

Please note that many wondered how Warren was able to read the bill so fast after it was released, however the rumors that the Republican health legislation was leaked to her via smoke signals is probably not true.

Sen. Bob Casey (D-PA) relied on the tried and true Democratic claim that their opposition screws old people, middle class, and the infirmed just so they can help the rich (like Hillary and Bubba Clinton?) ”

Senate Minority Leader Chuck Schumer who still hasn’t learned that glasses aren’t as helpful when you keep them on the tip of your nose, opined,  “The way this bill cuts health care is heartless. The president said the House bill was mean. The senate bill may be meaner. The senate Republican health care bill is a wolf in sheep’s clothing. Only this wolf has even sharper teeth than the House bill.”

Even two-time loser Hillary Clinton got in the act, she tweeted “Forget death panels. If Republicans pass this bill, they’re the death party.”

Remember when President Barack Obama, after the shooting of then-Rep. Gabby Gifford sermonized that the tone of America’s political discourse had to change, “it’s important for us to pause for a moment and make sure that we are talking with each other in a way that heals, not a way that wounds.”  The former president must have forgotten about his 2011 speech speaking about the GOP healthcare bill. Obama used the reverse Robin Hood argument that was so successful for him during his presidency: the Republicans steal from the poor and give to the rich:

“The senate bill, unveiled today, is not a health care bill. It’s a massive transfer of wealth from middle-class and poor families to the richest people in America. It hands enormous tax cuts to the rich and to the drug and insurance industries, paid for by cutting health care for everybody else. Simply put, if there’s a chance you might get sick, get old, or start a family — this bill will do you harm. And small tweaks over the course of the next couple weeks, under the guise of making these bills easier to stomach, cannot change the fundamental meanness at the core of this legislation.”

Understand that as Americans these Democratic Party politicians have every right to disagree with the GOP healthcare bill. In fact there are Republicans in congress who also disagree with the bill. However, as leaders of the federal government they have an obligation to lead, not divide.  If one believes the rich are helped more than the poor, it’s not a transfer of wealth (it’s really not), but it’s a disagreement over priorities.

It’s legitimate to state one’s worry that enough people will be covered under the Republican plan, but claiming the GOP bill “will literally cost American lives” as claimed by many Democrats is the kind of rhetoric that led to the Scalise shooting. And I would suggest that no one in congress of either party wants to see that happen again.