The Inconvenient Truth about Democrats and Racial Hypocrisy 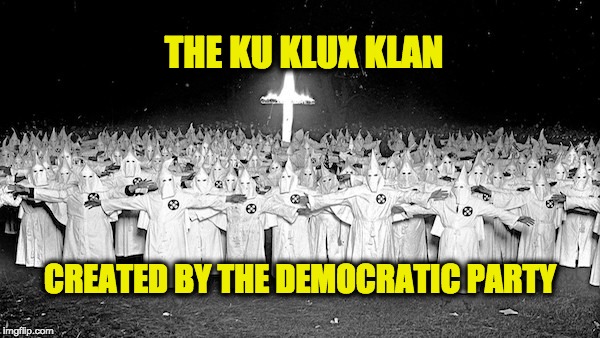 Did you know that the Democratic Party defended slavery, started the Civil War, founded the KKK, and fought against every major civil rights act in U.S. history?

But the Civil rights act of 1964 was filibustered by Democrats. The bill came before the full Senate for debate on March 30, 1964 and the “Southern Bloc” of southern Senators led by Richard Russell (D-GA) launched a filibuster to prevent its passage. Said Russell:

“We will resist to the bitter end any measure or any movement which would have a tendency to bring about social equality and intermingling and amalgamation of the races in our (Southern) states.”

That filibuster lasted until the morning of June 10, 1964, when former KKK member,Senator Robert Byrd (D-W.Va.) completed an address that he had begun 14 hours and 13 minutes earlier in order to block the legislation. Until then, the measure had occupied the Senate for 57 working days, including six Saturdays. A day earlier, Democratic Whip Hubert Humphrey of Minnesota, the bill’s manager, concluded he had the 67 votes required at that time to end the debate and end the filibuster. With six wavering senators providing a four-vote victory margin. Once the filibuster ended, the bill passed with a final tally of 71 to 29. Only 7 of the 94  only one of the 21 Southern Democrats in the senate voted for the bill.

My colleague Onan Coca presented this much watch gem from Carol Swain, professor of political science at Vanderbilt University, about the inconvenient history of the Democratic Party. The below was originally posted at Constitution.com.

The brilliant Vanderbilt professor, Carol Swain,  was the most recent host for Prager University’s educational videos.

The subject she took on was the inconvenient history of the Democrat party and its uncomfortable relationship with racism and racially motivated politics.

While the Democrats like to pretend that they’ve long been the defenders of ethnic and religious minorities, this is simply a fairy tale that they’ve concocted in recent years. The truth is that the Republican Party has always been the party to put minority rights before majority interests. Always. Whether on slavery, civil rights, religious freedom, freedom of speech, freedom of association, etc. The GOP has always been the true home for defenders of minority protections.

But you don’t have to take my word for it, Dr. Swain runs through a concise and compelling history of American politics to prove that the Democrats are hypocrites and the GOP are the true defenders of minority rights.

When you think about racial equality and civil rights, which political party comes to mind? The Republicans? Or, the Democrats?

Most people would probably say the Democrats. But this answer is incorrect.

Since its founding in 1829, the Democratic Party has fought against every major civil rights initiative, and has a long history of discrimination.

In contrast, the Republican Party was founded in 1854 as an anti-slavery party. Its mission was to stop the spread of slavery into the new western territories with the aim of abolishing it entirely. This effort, however, was dealt a major blow by the Supreme Court. In the 1857 case Dred Scott v. Sandford, the court ruled that slaves aren’t citizens; they’re property. The seven justices who voted in favor of slavery? All Democrats. The two justices who dissented? Both Republicans.

The slavery question was, of course, ultimately resolved by a bloody civil war. The commander-in-chief during that war was the first Republican President, Abraham Lincoln – the man who freed the slaves.

During the era of Reconstruction, federal troops stationed in the south helped secure rights for the newly freed slaves. Hundreds of black men were elected to southern state legislatures as Republicans, and 22 black Republicans served in the US Congress by 1900. The Democrats did not elect a black man to Congress until 1935.

But after Reconstruction ended, when the federal troops went home, Democrats roared back into power in the South. They quickly reestablished white supremacy across the region with measures like black codes – laws that restricted the ability of blacks to own property and run businesses. And they imposed poll taxes and literacy tests, used to subvert the black citizen’s right to vote.

And how was all of this enforced? By terror — much of it instigated by the Ku Klux Klan, founded by a Democrat, Nathan Bedford Forrest.

As historian Eric Foner – himself a Democrat – notes:

“In effect, the Klan was a military force serving the interests of the Democratic Party.”

President Woodrow Wilson, a Democrat, shared many views with the Klan. He re-segregated many federal agencies, and even screened the first movie ever played at the White House – the racist film “The Birth of a Nation,” originally entitled “The Clansman.”

A few decades later, the only serious congressional opposition to the landmark Civil Rights Act of 1964 came from Democrats.

And when all of their efforts to enslave blacks, keep them enslaved, and then keep them from voting had failed, the Democrats came up with a new strategy: If black people are going to vote, they might as well vote for Democrats. As President Lyndon Johnson was purported to have said about the Civil Rights Act, “I’ll have them n*****s voting Democrat for two hundred years.”

So now, the Democratic Party prospers on the votes of the very people it has spent much of its history oppressing.

Democrats falsely claim that the Republican Party is the villain, when in reality it’s the failed policies of the Democratic Party that have kept blacks down. Massive government welfare has decimated the black family. Opposition to school choice has kept them trapped in failing schools.  Politically correct policing has left black neighborhoods defenseless against violent crime.

So, when you think about racial equality and civil rights, which political party should come to mind?