Despite Shutdown Democrats In Puerto Rico For “Hamilton” And Hedonism. 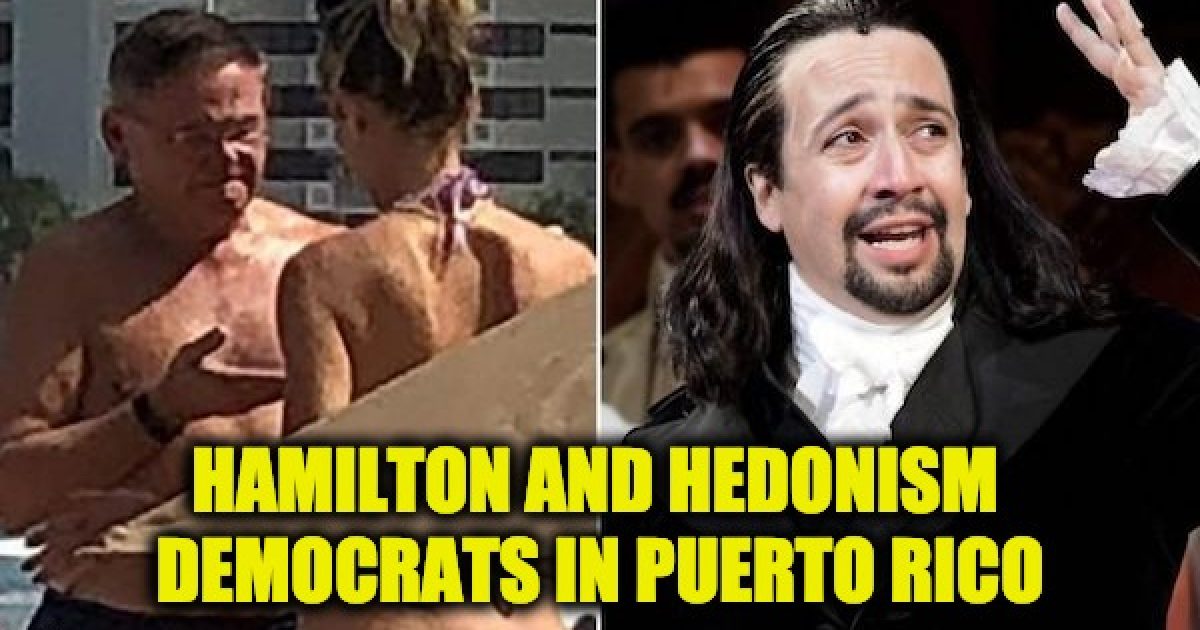 Gee, weren’t the Democrats worried about the federal workers not getting paid during the shutdown?  I guess not so much. The whole media establishment has risen up as one to play the advocate for thousands of government workers who are going unpaid during the ongoing government shut down. But as federal workers go without, Democrats have jetted off together for a luxurious vacation event at an elite Puerto Rican resort for “Hamilton” and hedonism.

Naturally, the media is practically ignoring the hypocrisy of Democrats sunning themselves on exclusive beaches while their constituents and supporters go without money to buy food… but, you know how that goes.

Presidential spokesperson Sarah Huckabee Sanders tried to point out this hypocrisy on Sunday.

“Democrats in Congress are so alarmed about federal workers not getting paid they’re partying on the beach instead of negotiating a compromise to reopen the government and secure the border,” she tweeted.

Democrats in Congress are so alarmed about federal workers not getting paid they’re partying on the beach instead of negotiating a compromise to reopen the government and secure the borderhttps://t.co/zpJypJ2Slq

Indeed, Democrat Senator Bob Menendez was spotted chatting up a sexy blond in a bikini on a sunny Puerto Rican beach:

Spotted: Sen. Bob Menendez on the beach at a resort in Puerto Rico on Day 22 of the partial government shutdown. Reports say dozens of Dems are in PR for the CHC BOLD PAC winter retreat — including meetings on Maria cleanup, and a party with PR’s “Hamilton” cast. pic.twitter.com/6FaBYKPo4L

Ignoring the shutdown and going on vacation to meet the cast of “Hamilton” might be worth it if the Democrats would heed these lyrics from “Hamilton:”

Ah, winning was easy, young man, governing’s harder
They’re being intransigent
You have to find a compromise
But they don’t have a plan, they just hate mine (convince them otherwise)
What happens if I don’t get congressional approval?

Menendez has been accused of hiring underage prostitutes. So, it’s nice that you can go from being accused of sexual improprieties to a ritzy beach resort to chat up pretty blonds. Only Democrats can do this.

Menendez isn’t the only Democrat enjoying a luxurious vacation in sunny Puerto Rico.

As the Washington Examiner reports:

Some 30 Democratic lawmakers left the government shutdown behind Friday on a chartered flight to Puerto Rico for a winter retreat with 109 lobbyists and corporate executives during which they planned to see the hit Broadway show “Hamilton” and attend three parties including one with the show’s cast.

Those attending the Congressional Hispanic Caucus BOLD PAC winter retreat in San Juan planned to meet with key officials to discuss the cleanup after Hurricane Maria at a roundtable Saturday.

The Democrats are being wined and dined by dozens of high-dollar lobbyists who want them to hand over billions in our tax dollars, while the government workers suffer.

Some 109 lobbyists and corporate executives are named in the memo, a rate of 3.6 lobbyists for every member. They include those from several big K Street firms, R.J. Reynolds, Facebook, Comcast, Amazon, PhRMA, Microsoft, Intel, Verizon, and unions like the National Education Association.

Now that the Democrats are back in charge of the House, they expect the government spigots to be opened wide again.

Or maybe they are just avoiding the Shutdown since they have no intention of compromise.