Suddenly, After 8 Years, Democrats Have Found The Constitution! (Not Really) 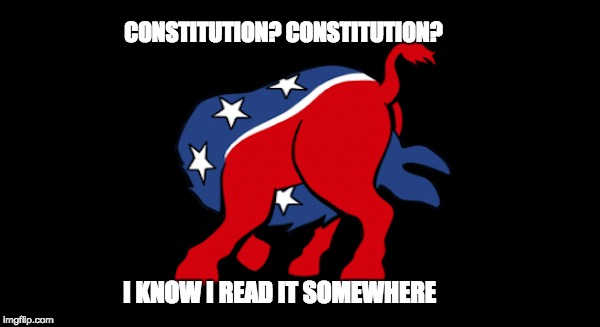 Suddenly, after 8 years, Democrats have found the Constitution!

All of a sudden, Democrats have found fiscal accountability, conservative spending principles, a conscious, AND the Constitution?  NOT!

They are quick to point fingers at all the transgressions Mr. Trump may have been involved in. With NO proof to back ANY of their accusations, they want special prosecutors, resignations and firings, all from actions they CLAIM happened over that last 90 days.

Interesting. With ALL the scams, scandals, and unconstitutional actions committed against the American people by the last administration, NO Democrats could be found stating even one disapproving or accusatory word against the Obama Administration or Clinton machine. Are they only sworn to enforce the Constitution on the opposition party?

Let’s start with Eric Holder, the Teflon Don of the DOJ. In 2012 not only was Eric Holder known for being the first African American Attorney General, he also became the first US AG in American history to be held in contempt of Congress on both civil and criminal grounds. The FIRST! Must feel good to have all those firsts!

Congress voted 255 to 67 against him. Nancy Pelosi and 16 other Dems walked out in protest. They said it was politically motivated. How rich coming from them. EX-President Oblamo claimed executive privilege so as not to have to administer the crushing blow against the AG who had Oblamo’s back.

Usually, in a situation like that, the President would have asked someone in his admin to resign or simply outright fire him. Oblamo refused and it was left to the DOJ to do it. Think about that. The DOJ, run by Mr. Holder and his boss Mr. Oblamo was supposed to take action AGAINST Mr. Holder? I think not. Surprised?

Mr. Holder refused to call the Ft. Hood massacre an act of terror by an Islamic extremist even though the soldier had cards and identified as a soldier of Allah! Instead they called it workplace violence. Really!

In reference to these wire taps that don’t happen and ALL the noise about how Trump stifles and hurts the media, it was Eric Holder’s DOJ under his boss Heir Oblamo that collected phone records and information on many individual reporters. They were specifically caught spying on the Associated Press and Fox News. Fox was being watched because they had received classified information from a CIA whistleblower. Hmmmm… double standard?

Eric Holder also claimed he was above the Supreme Court by declaring that the second amendment only guaranteed gun access to the military. The Supreme Court has ruled on several occasions that that is not the case. BUT who was going to stop Holder? His boss?

Mr. Holder seemed to be so concerned about voter suppression and intimidation that he forgot about the “white people.” That’s right. He allowed the NEW Black Panther Party thugs at voter polls on Election Day with clubs, yelling racial slurs at the white folks and even chasing them away. They were caught on tape doing it! But it seemed that white voter suppression under the Obama/Holder so-called Justice Department was just fine.

The DOJ decided that the Constitution applied to any terrorist caught by American military anywhere in the world with the exception of being caught on the battlefield in the act of aggression against Americans soldiers. WOW! Even the Supreme Court says that’s not true. The Constitution only applies to those on American soil. Once AGAIN Mr. Holder held himself higher than the Supreme Court and Boss Oblamo supported him.

Mr. Holder charged many journalists who simply re-posted articles from major newspapers about information leaked detailing who America was spying on! NOW Democrats say leaks are OK and good!

I don’t want to make this whole article about Eric Holder, So Google these and see for yourself what he got away with.

Loretta Lynch was no peach either. She hated the law as much as Oblamo and Holder did! Let’s not forget, she met with the powerful husband (former president) of someone she was investigating and didn’t recuse herself? No comments by Dems, except that they just take her at her word. Must be OK!

Let’s not forget FBI Directory Mr. Comey who himself need investigation after allowing so many transgressions and irregularities in the investigation of Hillary Clinton. I sat and spoke at LENGTH with a former FBI agent on the process that takes place in these investigations. Almost NONE were followed in Clinton’s case.

For example, all laptops involved in the investigation are missing or have been government wiped. Comey came out and stated in his comments that Mrs. Clinton lied in her testimony to Congress based on the testimony she gave to the FBI. A Lie is a LIE! Mrs. Clinton would not allow the FBI to take written notes and had all the FBI agents sign a privacy agreement. Think about that one. FBI agents questioning a suspect were told they basically couldn’t use any of the information they mentally gathered!

As if that weren’t bad enough, the FBI almost always uses a Grand Jury, especially in cases like Clinton’s. But one wasn’t used. WHY? Comey never said she wasn’t guilty. He said no prosecutor would take it on! But no cries for justice from a Dem.

I find it soooo hypocritical that with all the scandals, almost scandals, and unconstitutional acts carried out by the prior Administration, there wasn’t even ONE call from the Dems for justice. Not one!

The only justice the Dems kept calling for was to protect terrorists, illegal immigrants, refugees, and our foreign enemies.

Meanwhile, for 8 years, our vets, American taxpayers, businesses, and the Constitution where trampled on and the actions were cheered on by the Democrat Socialist Liberal party… Long Live Nancy Pelosi!