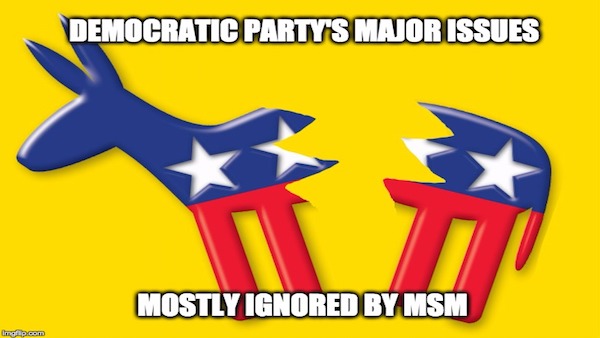 The mainstream media has their collective heads stuck in Russia and the end of the world supposedly initiated by President Trump’s exit from the feckless Paris Climate accord, they’ve ignored the fact that the DNC has been having serious problems. The DNC issues have been covered by the mainstream media but certainly to the same extent they are covering Trump/Russia or the Paris accord:

Hillary Clinton threw the DNC under the bus, adding them to the list of organizations and people she’s blaming for her embarrassing defeat. Predictably, former DNC staffers did not react well to that criticism, prompting yet more stories about how divided the Democratic Party is:

“Allies of the Democratic National Committee (DNC) in particular were incensed by Clinton’s criticism of the party apparatus, saying she mischaracterized the committee’s work while needlessly stoking internal divisions.”

DNC Chairman Tom Perez has come under fire for ignoring black women, In an open letter to Perez, more than twenty black women blasted Perez for “taking them for granted”:

“In the letter, the authors say that black women have consistently supported the party, but have been ignored by Democratic leaders who seemed to be more focused on winning back white voters who rejected Hillary Clinton in November. ‘The data reveals that Black women voters are the very foundation to a winning coalition, yet most Black voters feel like the Democrats take them for granted,’ the letter reads. ‘Since taking office, you have met with and listened to key constituencies. But you have yet to host a Black women leaders convening.’”

The DNC is even having to deal with a renewed fight over superdelegates. See below for a long list of headlines that have the DNC glad that the work week is almost over:

A “unity reform commission” the party created last July — made up of leaders selected separately by Hillary Clinton and Bernie Sanders — is tasked with making a recommendation by the end of this year: Keep superdelegates, eliminate them, or something in between.
But the 21 members of the commission admit that almost a year after the Clinton vs. Sanders nominating fight ended, the bitter feelings still haven’t gone away.
“I think tensions will definitely start to rise as we get into the nitty-gritty of proposals,” said Jane Kleeb, the Nebraska Democratic chairwoman and a Sanders selection for the unity commission.
“But I’m confident — and I guess hoping, at the same time — that it’s not just, ‘Oh, you’re a Bernie delegate, so of course you think that way,'” added Kleeb, who rose to national prominence as an activist against the Keystone XL pipeline.

And then there’s the biggest issue, not necessarily a party problem but it does reflect poorly on the party. In two different investigative reports by Circa.com, we’ve learned that not only did Obama’s NSA ignore the Fourth Amendment and collect information on Americans, but the FBI was sharing that information with outside parties. If you get your news from the mainstream media, you probably haven’t been exposed to these reports, because they are still protecting Barack Obama

President Obama’s NSA Court ignored the FISA court and its own regulations that were publicly promised to the American people, and violated those Fourth Amendment privacy protections while searching foreign intercepts that involved Americans without FISA court warrants. And OH BOY did they anger the FISA court. Circa.com used once-secret documents to reveal the Obama administration’s most serious constitutional abuses to date by the U.S. intelligence community.

More than 5 percent, or one out of every 20 searches seeking upstream Internet data on Americans inside the NSA’s so-called Section 702 database violated the safeguards Obama and his intelligence chiefs vowed to follow in 2011, according to one classified internal report reviewed by Circa.

The story gets worse. As a follow-up, Circa used the same document to demonstrate that the FBI shared that raw intelligence about American citizens with unauthorized third parties. You may remember that in his testimony days before he was fired Comey told lawmakers the FBI used  espionage data gathered about Americans without a warrant only when it was “lawfully collected, carefully overseen and checked.” That seems to be a lie.

Once-top secret U.S. intelligence community memos reviewed by Circa tell a different story, citing instances of “disregard” for rules, inadequate training and “deficient” oversight and even one case of deliberately sharing spy data with a forbidden party.

The FBI  even admitted to the FISA court that their violation “ranged from illegally sharing raw intelligence with unauthorized third parties to accessing intercepted attorney-client privileged communications without proper oversight the bureau promised was in place years ago.”

Each one of the above represents a major problem for the DNC, the top three Hillary, Black Women, and Super Delegates portray a party in disarray fighting amongst themselves, the last example just reinforces the image of Barack Obama and Democratic party quick to violate our constitutionally protected right, and a mainstream media going out of their way to protect liberal politicians. Well either that or they’ve left their brains in Russia.