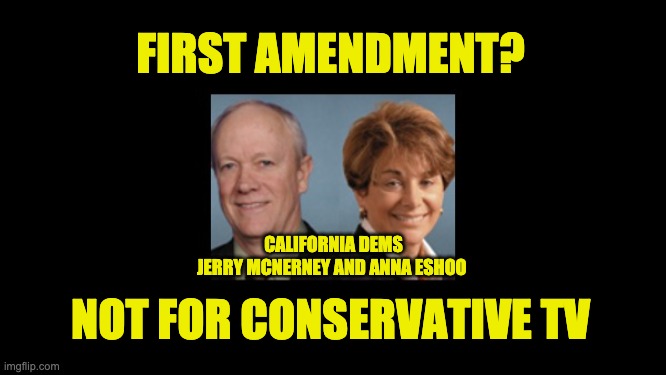 Remember when the Liberals and MSM attacked Trump for his criticism of the biased media? That was nothing compared to these two Democrat members of Congress from California. Reps Anna Eshoo and Jerry McNerney used their authority to target some of the TV news outlets that do not use Democratic Party talking points to create their news reports.  Democrats attack first amendment.

As it is too ‘on-the-nose to attack the right-leaning media outlets directly. The California leftists targeted the corporations who distribute them. Letters were sent to AT&T, Verizon, Roku, Amazon, Apple, Comcast, Charter, DISH, Cox, Altice, Hulu, and Google’s parent, Alphabet. Each of the letters contains the same leftist falsehoods and pressure tactics. They just changed the names of the TV distributor in each version. For example, the letter to AT&T begins with:

Our country’s public discourse is plagued by misinformation, disinformation, conspiracy theories, and lies. These phenomena undergird the radicalization of seditious individuals who committed acts of insurrection on January 6th, and it contributes to a growing distrust of public health measures necessary to crush the pandemic. We are concerned about the role AT&T plays in disseminating misinformation to millions of its U-verse, DirecTV, and AT&T TV subscribers, and we write to you today to request additional information about what actions AT&T is taking to address these issues.

Nearly half of Americans get their news primarily from TV. However, not all TV news sources are the same. Some purported news outlets have long been misinformation rumor mills and conspiracy theory hotbeds that produce content that leads to real harm. Misinformation on TV has led to our current polluted information environment that radicalizes individuals to commit seditious acts and rejects public health best practices, among other issues in our public discourse.

Experts have noted that the right-wing media ecosystem is “much more susceptible…to disinformation, lies, and half-truths.” Right-wing media outlets, like Newsmax, One America News Network (OANN), and Fox News all aired misinformation about the November 2020 elections.  For example, both Newsmax and OANN “ran incendiary reports” of false information following the elections and continue to support “an angry and dangerous subculture [that] will continue to operate semi-openly.” As a violent mob was breaching the doors of the Capitol, Newsmax’s coverage called the scene a “sort of a romantic idea.” Fox News, meanwhile, has spent years spewing misinformation about American politics..

They are singling out right-of-center news outlets for retributive action under the guise of targeting’ misinformation’. The letters do not make threats…it just asks questions that put pressure on the TV distributors by asking them to defend why they carry the  Fox, OANN, and Newsmax. 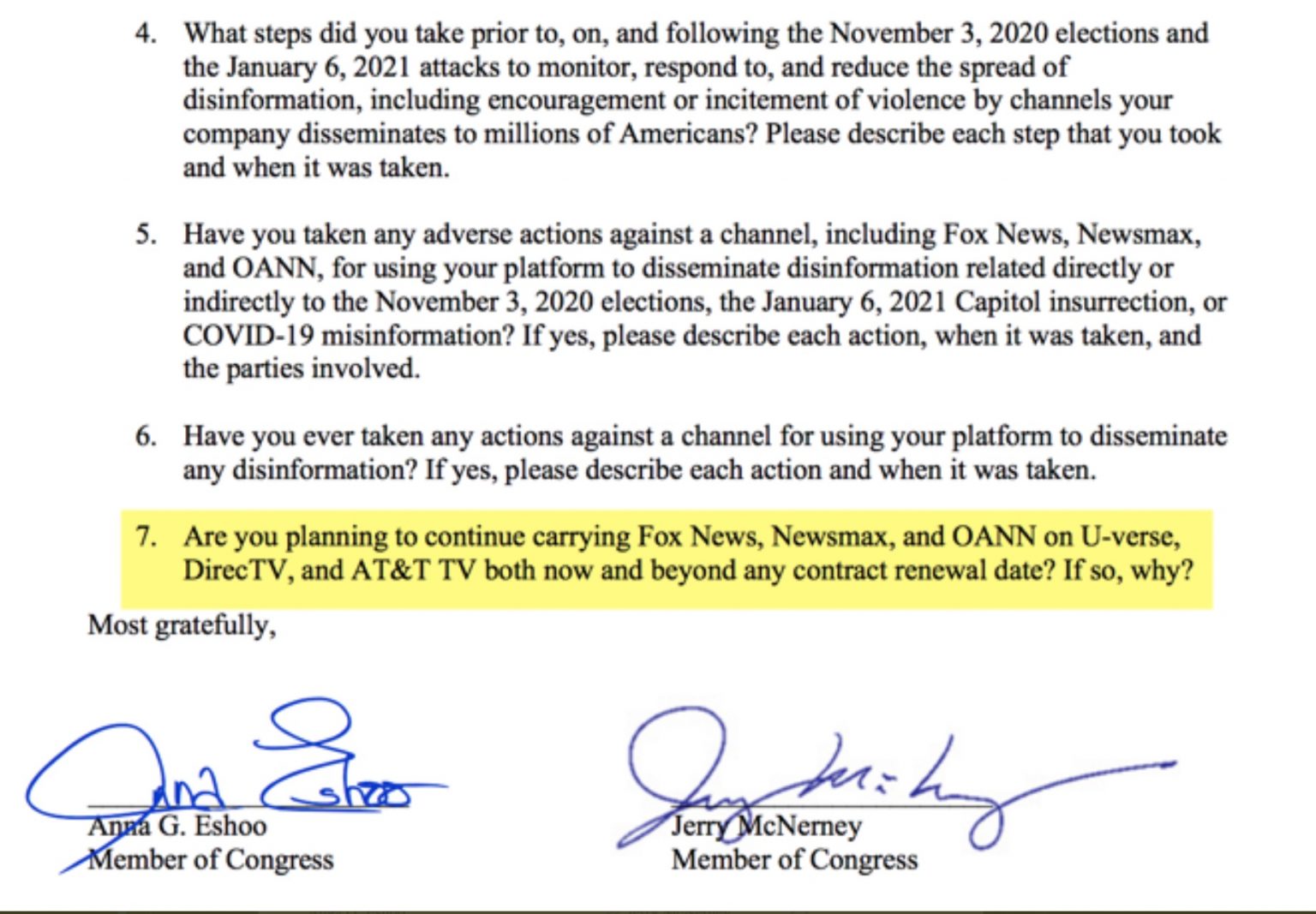 Newsmax responded to the Democrats’ letter and false charges in this video:

I’m sure they don’t want to hear criticism from the right, so here’s a slapdown or two for them from the political left:

It’s just a fact that the people who spent the last 4 years claiming to be so very worried about authoritarianism are absolutely committed to using their new power as the majority party to censor their adversaries off both the internet & cable using bullying tactics like this: https://t.co/aycybk9Uvx 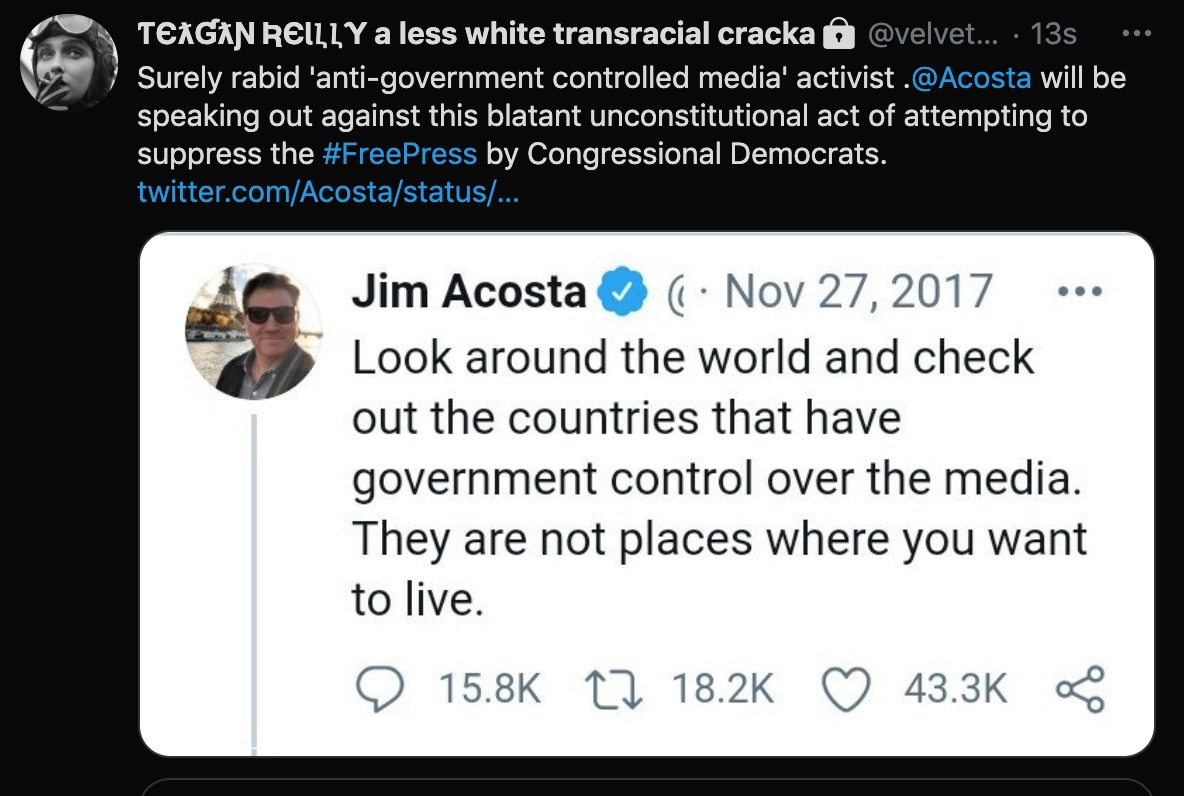 Any way you slice it, you’re authoritarians who don’t like getting exposed for who you are and what you believe. You had ZERO concern about the FBI fabricating evidence to criminalize an innocent man, General Flynn, nor did you have the slightest qualms about the nation’s oldest daily paper, the New York Post, being censored by Big Tech goons.

Never letting a crisis go to waste’, as the saying goes, they are brazenly attempting to exploit recent events to shut down voices critical of their leftist worldview.

“The concerted effort by Democrats to drive political dissent from the public square represents a marked departure from these First Amendment norms,” Carr said in a statement.

…In his statement, Carr said Democrats were sending a “troubling” message that “regulated entities will pay a price if the targeted newsrooms do not conform to Democrats’ preferred political narratives.”

“This is a chilling transgression of the free speech rights that every media outlet in this country enjoys,” he said.

The FCC head that the lawmakers’ demands to know how private companies decide which channels to carry “cannot be reconciled with bedrock principles of free speech and journalistic freedom.”

“I call on my FCC colleagues to join me in publicly denouncing this attempt to stifle political speech and independent news judgment,” he said.

If he believed this to be a new tactic, he was mistaken.

This was the goal all along, ever since MediaMatters published their white paper ‘War Plan 2017’. When Trump was still President-Elect, they were already trying to push a narrative that Trump’s supporters were ‘fake news’ (their words) and that ‘disinformation’ on social media would be targeted and suppressed by various means that were still in their infancy at the time. We now know it as ‘cancel culture.’

This was the same document that explicitly stated they were going to perpetually harass Trump with negative reporting, with endless lawsuits, and do everything they could to ensure they ‘delegitimized’ President Trump. Again, we stress that he was still referred to in this document as President-Elect Trump.

Yours truly discussed this topic on a TV interview here:

Promoting truly conservative, patriotic media is a must for those who love this nation.

We cannot rely on corporate media.

Many in “rightwing media” are failing us.

Clash Daily is one of the good guys. @Republicanuck https://t.co/1MictuyXql

The left isn’t as badass as they think they are.

Most of this post was first seen at  Clash Daily.