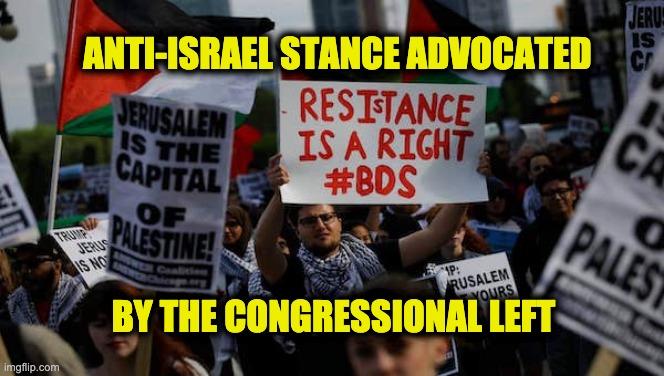 In a letter overflowing with misinformation, Reps. Cori Bush, Andre Carson, Alexandria Ocasio-Cortez, André Carson, Betty McCollum, Mark Pocan, Ayanna Pressley, and Rashida Tlaib expressed their “extreme concern that US charities are funding and providing direct support to Israeli organizations that are working to expand and perpetuate Israel’s illegal settlement enterprise in violation of international law, including supporting the dispossession and forced displacement of Palestinians from occupied East Jerusalem neighborhoods.”

The vicious screed focused on the Central Fund of Israel, a nonprofit that funds hundreds of important projects in Israel that help the world. CFI Director Jay Marcus called the effort “outrageous and pure Antisemitism” and “their goal is clearly not just to shut down the Central Fund, but all organizations that we fund.”

The left-wing bigots also called on Yellen, who is Jewish, to institute draconian policies toward the nonprofit status of charities that donate to Israeli causes in Judea, Samaria, and Jerusalem.
democrats anti-Israel hatred

“The ‘dispossession’ of which Ocasio-Cortez and Tlaib write in their letter does not exist. Israeli settlements have been built either on state or wasteland or on land that Jewish organizations and individuals have bought from Palestinian Arabs. ” Hugh Fitzgerald wrote at Jihad Watch, no Arabs were dispossessed of land to which they hold clear title,”

Fitzgerald added, “Tlaib and Ocasio-Cortez will continue to repeat their claims about “occupied territory” and an “illegal settlement enterprise” and “violations of international law” no matter how often they are corrected. And we can only sweep back the tide of their falsehood by referring to the provisions of the Mandate for Palestine, which support the “settlement enterprise” that they claim is illegal. They will keep lying, and others, including you and me, will keep insisting on the truth. There is no end to this.”

Tlaib also asked Yellen to “act to enforce US law and end these organizations’ status.”

“Tax-exempt nonprofit status allows US-based 501(c)(3) entities and their US-based donors to receive an effective subsidy from the US government to support serious breaches of international law and violations of internationally recognized human rights related to the expansion of the illegal Israeli settlement enterprise,” the Michigan congresswoman, who engaged in other overt anti-Semitic rhetoric this week, claimed.

Noxious Democrats used the “occupied” slur, too, but also defined the territory several times as “the West Bank, including East Jerusalem” or “occupied East Jerusalem neighborhoods.”

Interestingly, the crowned queen of Antisemitism, Ilhan Omar, did not sign onto the execrable letter.

For more on the Antisemitism and Anti-Israel policies of the five who sent the letter (and other Democrats), please click here.