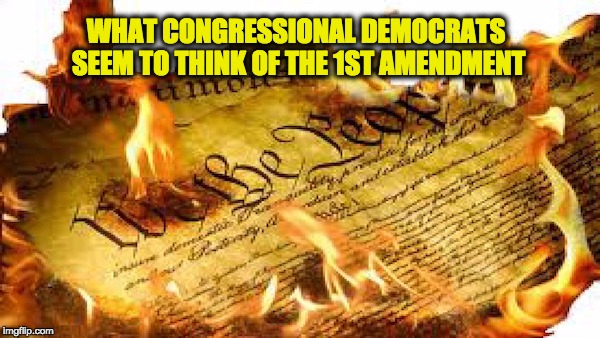 If you  listen carefully to the Democrat leaders on Capitol Hill you can hear the whispers of fascism creeping in to their normal everyday conversation. The ease in which Democrats discuss the idea of restricting the First Amendment rights of their constituents should drive fear into the hearts of all Americans, but that simply doesn’t seem to be happening. Granted there has been too much hate speech in America lately but that isn’t because of free speech, but because what has been coming out of the mouths of Democratic leaders.

On Tuesday, the Senate held hearings on Free Speech and how the current campus climate is stifling the First Amendment rights of many students, teachers, and citizens. During the hearings the Senate heard from some prominent professors who argued that the attacks on free speech that we’re seeing across the country can have a deadly serious affect on other areas of civil life. Weakening one of our “God given” rights, could quickly lead to the erosion of other rights. The professors also admitted that every right has its limits, and speech is limited by the threat that could be posed by said speech. (Think of the old argument about shouting “fire” in a crowded theater.) However, they argued that this limit could not be imposed on speakers by others who disagreed with their speech (often called “the heckler’s veto”), because this was the very essence of the First Amendment. Sadly, Senator Dianne Feinstein (D-CA) and other Democrats (including Dick Durbin) did not seem to agree as they argued that threats posed by opponents of certain speech must also be taken into account when deciding whether or not speech was permissible.

After reading the First Amendment out loud, Feinstein said, “The fact of the matter is that there are certain occasions on which individuals assemble not to act peaceably, but to act as destructively as they possibly can… When you have a set group of people that come to create a disturbance, some of them even wearing masks or wearing certain clothing, what do you do? … I do believe that the university has a right to protect its students from demonstrations once they become acts of violence.”

“There are of course times, as Senator Feinstein pointed out, that the University isn’t trying to suppress speech because it finds it offensive but because enough people who are willing to stoop to violence find it offensive that there is then the threat of a violent reaction to such speech. But I tend to agree with Senator Cruz’s view that that kind of a heckler’s veto should not be allowed.

“One of the basics of psychology that I think we’ve learned, and all of us who are parents I think have learned it very first hand, is behavior that is rewarded is repeated. When thugs learn that all they need to do in order to suppress speech is to threaten violence then there’ll be more such threats from all over the political spectrum. And I think the solution to that is to say that the speech will go on and if that means bringing in more law enforcement and making sure that those people who do act violently or otherwise physically disruptively that they be punished.”

While Volokh made stunningly simple and clear argument, Senators Durbin and Feinstein continued to push back, arguing that the threat of violence from protesters was enough to shut down speech on campus or anywhere else where violence was threatened.

Feinstein continued Durbin’s argument by saying that sometimes the danger posed is greater than the capability of the school or local authorities to handle. Volokh countered that when the police could no longer control threats of violence or lawbreakers our society would indeed be in a perilous place. Feinstein continued to press the Professors by wondering if they expected schools to always be prepared to deal with protests and threats? The professors argued that yes, schools should always accommodate speech, particularly when invited by students of that school and for credible reason. Can we also just add, that when a school schedules a speech that might be controversial, it’s really not that difficult for the school to coordinate with local authorities to provide for student and campus safety.

Sadly, Feinstein just never seemed to understand that if you allow the hecklers to shut down free speech… then free speech is functionally dead.

Professor Frederick Lawrence: I think the way to start with this is with a strong presumption in favor of the speech, particularly if it’s speech that’s coming from a student group who has invited somebody.

Feinstein: No matter how radical, offensive, biased, prejudiced, fascist the program is? You should find a way to accommodate it.

Folks, if the Democrat leaders can’t seem to grasp the concept of free speech how are their followers ever going to get it? If this hearing is indicative of the Democrat Party today… our nation is in very big trouble.

Update: Majority Leader Mitch McConnell addressed the above with very wise words on the Senate Floor on Tuesday:

Yesterday, in the Judiciary Committee, Chairman Grassley held a hearing to explore the worsening problem of a lack of tolerance on college campuses.  Imagine that—college campuses of all places, for the views of others. One of the witnesses at the hearing was Floyd Abrams, whom our former colleague Senator Moynihan rightly described as ‘the most significant First Amendment lawyer of our age.’ Mr. Abrams noted that we are witnessing ‘an extraordinary perilous moment with respect to free speech on campuses,’ where ’too many students . . . seem to want to see and hear only views they already hold. And to prevent others from hearing views with which they differ.’ What could account for this? A profound lack of information is one answer. For example, Mr. Abrams cites a study where ‘nearly a third of college students could not even identify the First Amendment as the one that deals with freedom of speech.’

“The day before, across the street, the Supreme Court reminded us of the importance of a vibrant right of free speech, where its exercise does not depend upon the sufferance of the government. In striking down the ‘disparagement clause’ of federal trademark law, the Court reminded us of what too many of those on college campuses appear not to have learned and too many others have forgotten: ‘Speech may not be banned on the ground that it expresses ideas that offend.’

“The Foundation for Individual Rights in Education estimates there were 43 reported instances of revoked speaking invitations or similar efforts to block speakers on campuses last year. That’s double the number recorded the previous year. It’s more than 700% higher than the six incidents recorded in 2000. And the trend is getting worse, not simply in terms of the overall number of incidents but — more worryingly — in terms of the growing aggressiveness of those efforts. This year alone, there have been multiple instances of intimidation, violence, and rioting at universities across the country. There has been nasty and thuggish behavior aimed at suppressing speech. Sadly, it has often succeeded.

“As USA Today put it in a recent editorial, ‘In just the place where the clash of ideas is most valuable, students are shutting themselves off to points of view they don’t agree with. At the moment when young minds are supposed to assess the strengths and weaknesses of arguments, they are answering challenges to their beliefs with anger and violence instead of facts and reason.’

“That should worry all of us. Regardless of party. Regardless of ideology. Hearing criticisms of one’s beliefs and learning the beliefs of others is simply training for life in a democratic society. It doesn’t mean one has to agree with those opinions, but no one is served by trapping oneself and others in cocoons of ignorance. That’s hardly the recipe for a free and informed society. To quote Frederick Douglass, ‘to suppress free speech is a double wrong [because] it violates the rights of the hearer as well as those of the speaker.’

“Just as it was not right during the Obama years for Americans to endure harassment or incur crippling expenses because the government didn’t like what they believed, it certainly is not right today for Americans to live in the shadow of fear simply because they dare to speak up, or think differently, or support a candidate or cause that the speech-suppression crowd may disagree with.

“It really doesn’t matter who you are or whether what you’re saying is popular. These rights do not exist to protect what’s popular, they exist precisely to protect what isn’t. That’s one reason I’ve long opposed ideas like the flag-burning constitutional amendment. That doesn’t mean I agree that the flag should be burned. Of course I don’t. I disagree strongly. But it’s the principle that matters. Because the moment we allow ourselves to believe that some people stand outside the free-speech protections of the First Amendment, we’re all in trouble.

“The growing trend of intolerance we’re seeing has taken many forms recently, but the underlying hostility to free speech has not changed. As I noted earlier, in recent years the threat had often come from the federal government. These days, the threat tends to come from different quarters. There have been many high-profile incidents of speech suppression and violence at universities across the country in particular, but it would be a mistake to think that this problem is isolated to college campuses. The bottom line, for me, is this: we simply cannot allow this trend of violence and intimidation to become the new normal in our country. This is a serious problem that deserves our serious attention. The solutions will not come simply. They will not be found in a single piece of legislation.

“As President Reagan famously put it: ‘Freedom is never more than one generation away from extinction. We didn’t pass it on to our children in the bloodstream. It must be fought for, protected, and handed on for them to do the same.’ And that is what we are called upon to do again now. To inform. To engage. To empower. In the end, to inspire a new generation to defend a fundamental right for future generations — just as past generations did for us.

“That’s what I aim to do by continuing this dialogue here on the Senate floor. From this platform, I will continue to raise the importance of free speech, outline the threats it faces, and do what I can to inform and encourage Americans to rally in its defense. Others are using their platforms to advance similar goals, as Chairman Grassley did yesterday. I hope more will join in as this discussion continues. Because free speech is critical to who we are as Americans, regardless of party, and we owe it to future generations to do what we can today to defend it.”