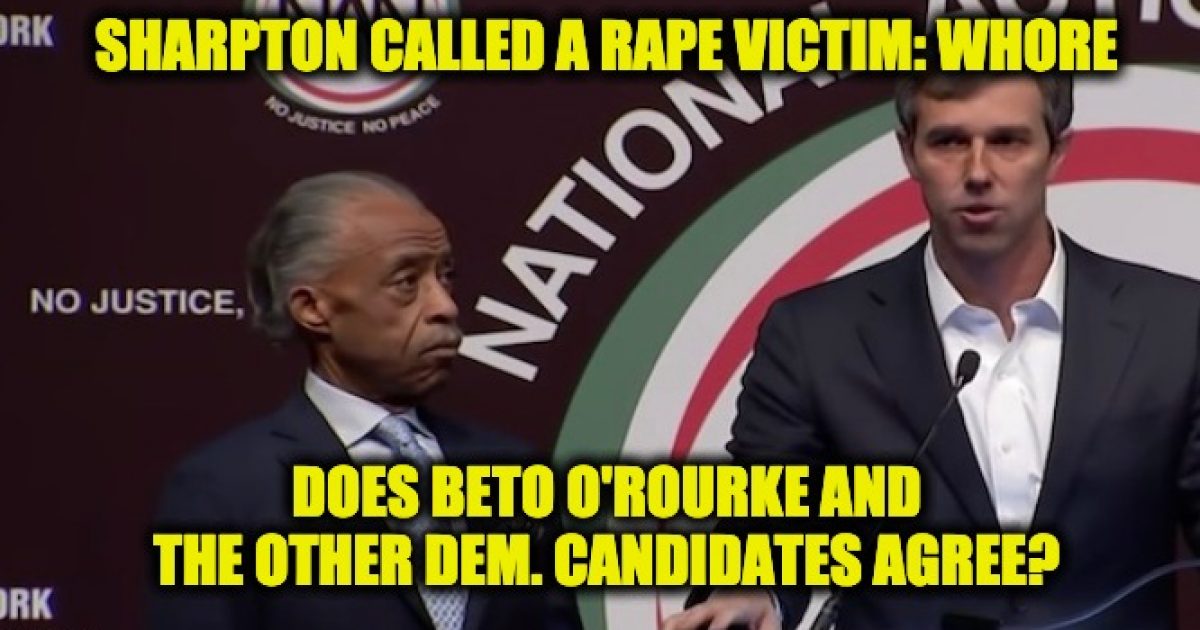 Most of the 2020 crop of Democratic Party presidential wannabees spent the past few days kissing up to one of America’s most famous hate-mongers. A man who has shown hatred toward Caucasians, Jews, Asians, Women, and Gays. This low-life who has caused riots and ruined lives with his lies and a tax-dodger who calls himself a Reverend but does not believe in the ninth commandment about bearing false witness. The name of this wretched demon is Al Sharpton:

For most of his life, Sharpton been spewing hatred. And by showing their “love” to Sharpton, the Democratic Party wannabes endorsed that hatred,

Sharpton’s record of hate didn’t start with making the Eric Garner killing a black/white issue despite the fact the senior cop on the scene was both black and female. Nor did it start when Sharpton took the killing of a kid who tried to grab a policeman’s gun and then menacingly charged the cop in Ferguson Missouri a white/black issue. It didn’t even start with Sharpton promoting the “hands up don’t shoot” fraud even after it was proven to be a myth. He built his career on promoting that kind of hatred and divisiveness.

Just by showing up, these people who want to be President of Al Sharpton endorsed his slander of former NY State AG Robert Abrams. He refused to meet Abrams during the Tawana Brawley hoax because meeting AG who was Jewish, would be “like asking someone who watched someone killed in the gas chamber to sit down with Mr. Hitler.” Is this the voice of a preacher? Is it the voice of someone trying to unite the races? Well, fourteen Democrats who want to be president think so.

In 1987 Steven Pagones former Assistant District Attorney in Duchess County was accused by Sharpton of raping Tawana Brawley. Not only was Pagones nowhere near Brawley that night, but also the entire rape story was a fraud.  This week fourteen Democrats endorsed the slander.

After days of anti-Jewish rioting in Crown Heights, at the funeral of Gavin Cato in 1991 where Al Sharpton, gave a powerful eulogy inspiring hatred and Antisemitism:

Those people in Crown heights especially those injured in the violence never had justice from Sharpton’s incitement, but that doesn’t mean it didn’t happen. According to the sworn testimony of Efraim Lipkind, a former Hasidic resident of Crown Heights:

These Democrats who showed their devotion to  Sharpton, never ask him about the summer of 1991 when NYC Jews complained about the Antisemitism of Black College professor Leonard Jeffries in 1991, Sharpton called them race baiters adding “If the Jews want to get it on, tell them to pin their yarmulkes back and come over to my house”–

The pack of Democratic candidates endorsed the murder of Angelina Marrero, Cynthia Martinez, Luz Ramos, Mayra Rentas, Olga Garcia, Garnette Ramautar, Kareem Brunner, the seven victims of the massacre at Freddy’s Fashion Mart. They are dead because a four-month-long campaign of hate by Al Sharpton that incited a man to firebomb the clothing store killing the seven innocents. What’s that? They didn’t endorse the murders? If they didn’t support the killings why were they paying tribute to Sharpton?

During the Kavanaugh hearings, the Democrats insisted that all women who claim to be victims are to be believed.  But they showed up to be blessed by Sharpton despite what he did during “Central Park Jogger” trial? The jogger was raped and beaten to within an inch of her life. Sharpton led rallies where he claimed her boyfriend raped the “jogger” and called the woman who was raped and beaten to within a hair of death a whore. Whether the men on trial were innocent or guilty didn’t matter to Sharpton, he promoted hatred via falsehood.

Sharpton used racially charged lies to destroy the political career of David Dinkins, the hapless first black mayor of NYC. He was angrily denounced by Sharpton using these words, “David Dinkins, you wanna be the only ni**er on television, only ni**er in the newspaper, only ni**er that can talk. Don’t cover them, don’t talk to them, ’cause you got the only ni**er problem. ‘Cause you know if a black man stood up next to you, they would see you for the whore that you really are”  By the way the asterisks were put in by me, Sharpton used the “n” word.  Do those 14 Democrats use the “N” word?

Remember the controversy surrounding the Duke lacrosse team?  They were falsely accused of rape. Ignoring the 9th commandment Al Sharpton declared that these ”rich white boys” had attacked a ”black girl,” and he warned that if arrests were not made immediately, there would be no peace.  Eventually, the evidence proved she invented the story, and all charges against the defendants were dropped.  If they spent time with Sharpton those Democrat’s endorse his fake charges.

Do those 2020 candidates put down the Mormon Faith? When Mitt Romney was running for President, Al Sharpton did:

These people running for the Democratic nomination, do they even care that they paid homage to a man who called General Colin Powell, George Bush’s house Negro?  Someone who said, “White folks was in the caves while we (blacks) was building empires. … We built pyramids before Donald Trump ever knew what architecture was. … We taught philosophy and astrology and mathematics before Socrates and them Greek homos ever got around to it.”

Do these Democrats use the term punk faggot as Sharpton did?

This is the low-life bigoted, anti-white, anti-Semitic, racist homophobe, that fourteen Democratic candidates endorsed just by showing up. Their very presence should not only eliminate them from running for the oval office but also they shouldn’t be allowed near the White House even if they pay for a tour.