Democrats Still Living In An Alternate Reality, ‘The Democrat Zone’ 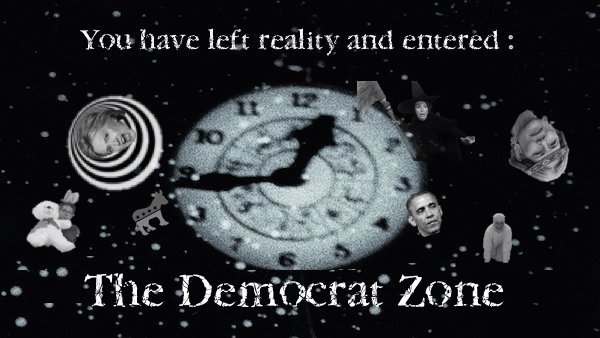 You are traveling through another dimension, a dimension not only of sight and sound but of mind; a journey into a wondrous land where acts are good when executed by one party, but evil when they come from another.  That’s the signpost up ahead — your next stop, the Democrat Zone.

I’ve always been one who wants open dialogue on all issues. I like when someone has an opposing viewpoint and comes at it honestly. Note that word “honestly.” What I mean by that is, if you have formulated your own opinion based on fact or experience then even if we are at opposite ends of the issue we should be fine. If you are simply spewing the “Party” line or repeating fake news from your favorite fake news sources, then the gloves are off.

Case in point: When President Oblamo restricted visa waivers for seven Muslim-majority countries — Iran, Iraq, Syria, Sudan, Somalia, Libya and Yemen, there was no outcry from the Left. (There’s much more to that “ban” but you’ll have to read the Visa Waiver Program Improvement and Terrorist Travel Prevention Act.) And the Left didn’t freak out when Democrat President Jimmy Carter rescinded/cancelled all Iranian visas.

The Oblamo administration actually stopped processing visa’s for 6 months from Iran in 2011 after it was found (cough-cough) that Al Qaeda operatives tried to obtain refugee status in Kentucky. But real applicants who actually helped the U.S. government as intelligence sources were ignored. God only knows what happened to them! But his highness Mr. Obama was in office, so all that was OK!

In November of 2016 his eminence Senator Chuck Schumer said we may need a pause on Syrian refugees entering the country. No outrage!

Democrat Bill Clinton signed a travel ban from those countries that had HIV outbreaks. No outrage!

Didn’t FDR limit the rights of Germans, Japanese, and Italians already in this country, even if they were born here? What, no outrage!

Did you catch the common thread in all those cases? All Democrats!

Trump’s temporary bans have been met with outrage from the left! Judges who have stopped President Trump’s bans are almost all appointees of… Guess who?

One ban even used the same information that Obama used to issue his temporary travel ban. It was also stayed.

When Republicans speak out on the need for a travel ban of some kind until we get proper security screening in place the Left goes nuts acting like spoiled 17 year-old brats!

When the Left has actually implemented bans in the past, the Pelosi and Schumer’s of the world praise the move as making the United States more safe! Yep, that’s a double standard right there.

I bet the British are wishing they had a temporary pause or stronger check points right about now.

Democrat leadership has decided that because of their losses over the last 8 years they need to move farther to the Left. More towards socialism. More towards progressivism. Really? So, you lost all those seats across the country while implementing your anti- religion, anti-free speech, anti-second amendment agenda and you think you lost because you didn’t go far enough to the Left?

When you believe that it’s bad or wrong to honor the American Flag, or think that the United States is the best country on the planet, or believe that America and its people are exceptional, you are alienating mainstream America!

When you believe that illegal aliens deserve more access to schools, grants, education, and government aid than taxpaying, American-born citizens, you are alienating mainstream America!

When you decide that borders are not needed and we are all one big happy global family, you are alienating mainstream America!

You see the great thing about being an American is what this country stands for! Many people legally immigrated to America for a better way of life, a safer non war torn environment, better education for their kids, clean streets, clean water, less corrupt government, and freedom to worship… or not!

That happens within the boundaries and borders of the United States of America. Nowhere else. People didn’t flock to Russia or India or pretty much any other country for freedom. They came here! To America. For the American way of life.

They brought some of their culture, which is great. That’s why we have pizza, tacos, sauerkraut, yogurt, and so many other cultural foods. But they all assimilated and became Americans.

Much of the Democrats’ base from all over the country voted for Donald Trump. Those people, your base, were tired of your insanity. Tired of you talking down to them and telling them what’s best for them and their families instead of listening and representing them. Tired of watching the America then knew and loved slip away. Many of their ancestors came here to get away from religious persecution, heavy-handed government, socialism and communism with a sprinkle of progressivism. They voted Republican for the first time ever.

Hillary you lost because you couldn’t connect. Democrats you lost because in your quest for global domination you left behind the hard-working, union-based, God-fearing American citizen. Believe it or not, there are millions of them.

When you call all who voted for Trump, morons, uneducated, haters of women, and racists, you are calling working class, Democrat Americans that. You are calling half the country that.

As long as Nancy Pelosi, Chuck Schumer, and the rest of the Democrat team keep running your Party, and as long as you keep pushing America towards a socialist government, you will continue to hand power over to Republicans!

If you really believe that’s what Americans want, you truly are living in an alternate universe.