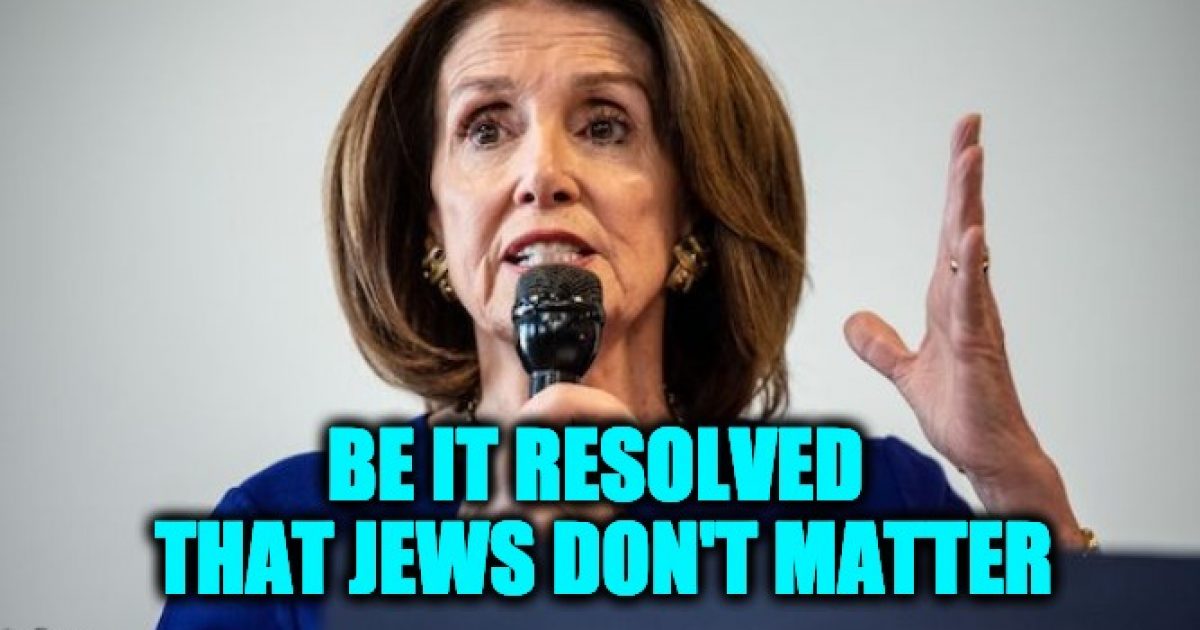 To be honest, it more than hurts.  It’s created a pit in my stomach that won’t go away. I am usually able to separate my emotions from the goings on in DC, but this was different. I am terrified of the future. It wasn’t a political loss, it was a statement by the Democratic Party. In a 407-23 vote, the Democratic Party-led House of Representatives that me, my wife, my two kids and the other 6,850,860 Jews living In the United States do not matter.

Representative Ilhan Omar (D-MN) made her second anti-Semitic declaration in the past month. To address her hatred, the spineless Democratic Party leadership couldn’t muster the courage to stand up to Omar’s Antisemitism. Instead, they passed a generic resolution that basically said that being mean to others is a bad thing.  Really?  I learned that lesson when I was a child watching programs such as Romper Room, Howdy Doody, and Captain Kangaroo. As for the Jew-hating Rep Omar, she not only voted for the measure but celebrated it as a step toward fighting Islamophobia. Omar and the other anti-Semites in the Democratic Party celebrated, an indication that they took the vote as a sign that Jew-hatred is okay.

The Democratic party already rejected different types of hatred even when it isn’t even there.  If someone calls the terrorism coming from the radical Islamic community, Islamist terrorism, they are branded by Democrats as Islamophobic. Those who disagreed with the policies of President Barack Obama, they were branded as racist. But that same party, the Democrats refuse to recognize Antisemitism. It hearkens back to the days when FDR allowed about 200,000 Jews to die in the Holocaust because he believed there were enough Jews in America already.

If you believe that the message of this resolution is all hatred is terrible, you are naïve. My first article warning that the Democratic party was becoming anti-Semitic was posted on January 29, 2007. Eleven years later the party’s Antisemitism had metastasized and infected much of the party. The message the Democrats sent with their feckless resolution is the party is embracing the Antisemitism that has affected the party, and they do not care about Jewish Americans.

Why don’t the Democrats and their protectors in the mainstream media believe people matter?  Jews have served in every American war, we’ve served the country in government, in charitable organizations. Jews pay taxes, we teach our young to love this country. I have never been in an American Synagogue that did not display Old Glory. Outside of the African American community, the Jewish community fought harder for their civil rights more than any other American ethnic group.

I love this country that took in my grandparents when they were fleeing from the Cossacks in Odessa. Only in America did they have the opportunity to get a decent job, feed their families and practice their faith. But now a member of the Democratic Party has questioned my loyalty to this country, and they refuse to censure her.  Are they saying the country that welcomed my family 125 years ago no longer welcomes us? After yesterday’s vote, it feels that way.

Liberal commentators are protecting the Democrats. For example on Fox and Friends, the day after vote Juan Williams claimed that most Jews don’t really mind Rep. Omar’s anti-Semitic statements it’s really all about the Republicans trying to divide the Democratic Party. He added that the only people who care about Omar’s remarks are the Evangelical Christian supporters of Israel.

Before Omar’s latest Jew-hatred, I’ve tried to reach out to Juan Williams about the Democratic Party’s growing’ Antisemitism because on TV he has refused to acknowledge the hatred.  I’ve even sent him long letters sending him examples of his party’s hatred with links to the sources. But Williams, who has more than once declared a racist comment as” hurtful,” has never responded. Does he not believe that Jews can feel hurt by anti-Semitic statements?

Many Jews including me are more than hurt by the rash of Antisemitism, we are terror-stricken.

According to the FBI, almost 60% of the hate crimes in 2017 based on religion were against Jews. Per the ADL Antisemitism in the US is growing substantially, anti-Jewish incidents increased by 57% in the US in 2017. IMHO the growth in hatred was incited by eight years of Jew-hatred coming from President Obama, and at least a dozen years of hate from the Democratic Party,

Antisemitism is rising sharply across Europe, experts have said, as France reported a 74% increase in the number offenses against Jews last year and Germany said the number of violent anti-Semitic attacks had surged by more than 60%. In Great Britain, the number two party,  the Labor Party is being recognized as anti-Semitic.

Almost a century ago a small party in Germany began to make anti-Semitic statements such as Jewish money control the government and the Jews are not loyal to Germany. Most Germans said it’s just talking, they don’t really mean it.  Eventually, the National Socialist German Workers’ Party, commonly known as the Nazis were elected into power and six million Jews were murdered.

Socialism and leftist extremists are taking over the Democratic Party and like the socialist Nazis, and Communist Russia they are making the Jews their scapegoats. And like the Germans of the 1920s and 1930s, today’s traditional Democrats like Nancy Pelosi claim the anti-Semites don’t really mean it.  And leftist commentators such as Juan Williams claim the Jews aren’t bothered by the hatred. He can be hurt by racist comments, but he doesn’t believe Jews can have human feelings.

To be honest, I’m frightened for my family and my people. Jew-hatred is growing all across the world, and here in America one party and liberals in the MSM refuse to recognize and censure. Can another Holocaust grow from this? Of course! That’s how it started in Germany, and the Germans said it could never happen there.