A little more than half of all Americans sympathize most with Israel (vs 19% for both or neither and the same percentage for the Palestinians). However when you look at the sympathy by political party (self-identified), 74% of Republicans sympathize more than Israel while only a third of Democrats feel the same way. This margin of 41% is the largest since Pew started tracking the numbers. 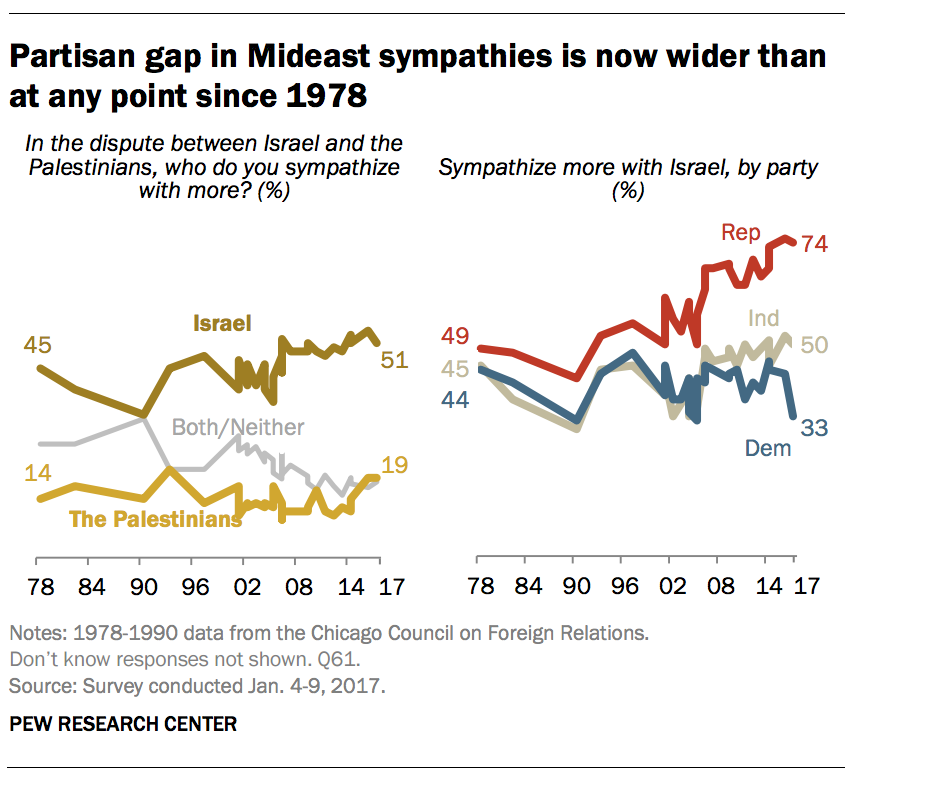 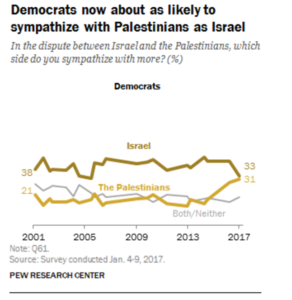 The growth in sympathy may be a result of the eight years of Obama Administration venom directed at Israel. The drop in support for Israel may be directly tied to the Democratic Party primary season where the surprising showing of Bernie Sanders and Hillary Clinton’s corresponding pivot to the left ceded party control to the most extreme liberal wing of the party, which has always shown an aversion to the Jewish State.

On the GOP there has been a steady growth of support for Israel since 1978 when it was at 49% to today where it stands at 74%. 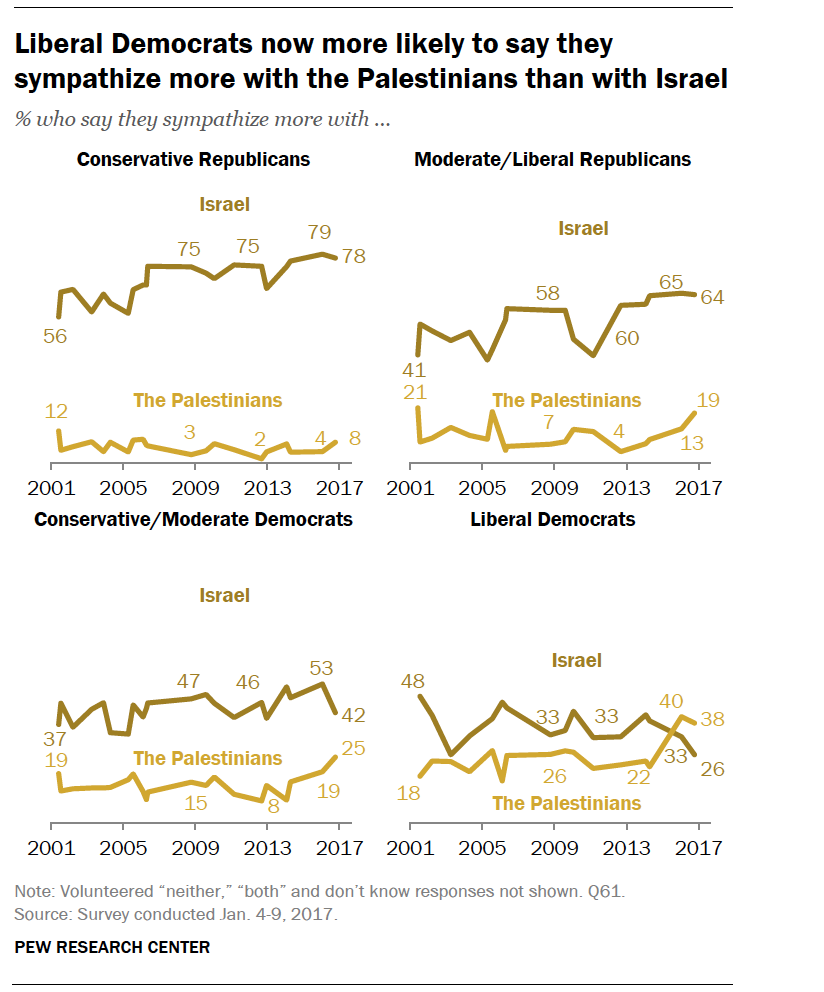 While both flavor of Democrats have seen a drop in sympathy for Israel, liberal Democrats, the wing of the party most closely identified with Bernie Sanders, Elizabeth Warren and of course, President Obama is the only grouping of either wing of either party that sympathizes more with the Palestinians (38%)  than the Israelis (26%).

The Democratic Party sympathy percentages may just be a case of the numbers catching up with the policy.  President Obama has proven to be the most anti-Israel president since the modern state of Israel was created in 1948.

At the very beginning of his administration Obama told the supposed Jewish leadership that one of his goals was to drive a wedge between the US and Israel. “When there is no daylight,” the president told American Jewish leaders in 2009, “Israel just sits on the sidelines and that erodes our credibility with the Arabs.” The explanation ignored Israel’s 2005 withdrawal from Gaza and its two previous offers of Palestinian statehood in Gaza, almost the entire West Bank and half of Jerusalem—both offers rejected by the Palestinians.

Obama helped to legitimize the anti-Israel organization J Street including them in meetings with Jewish leadership and pushing  members of Congress to endorse J Street by lending their name to the organizations first national conference. When former congressman Steve Israel announced his support of J Street he was awarded with leadership in the DCCC making him the fourth most powerful Democrat in the House.

During his first term Obama constantly announced anti-Israel policies, broke previous deals made with the Jewish State, and even publicly embarrassed the Israeli Prime Minister by leaving him and the Israeli delegation alone in a White House conference room for over an hour just to sit and stew. Obama surrounded himself with anti-Israel and anti-Semitic advisers even including Al Sharpton who led two anti-Jewish riots in NYC, or Robert Malley who has not only written anti-Israel essays but his dad was a close friend of Yasser Arafat. All this was made public, all this taught Democrats, especially the liberal Democrats that Israel was less than a full ally. Even worse (in the minds of some Democrats), Israel selfishly didn’t agree with the anti-Israel policies of Barack Obama.

On Obama’s insistence, the Democrats removed 4 pro-Israel planks from their party platform in 2012, when they tried to add one (Jerusalem as capital of Israel) back, the convention voted no but the leadership lied and said it was passed. The planks about not returning to the 1949 armistice lines, not negotiating with Hamas, and Palestinian refugees will return to Palestinian territory as opposed to Israel were never put back. Again this news was covered by the mainstream media and represented a signal to the Democrats to stop supporting Israel.

During the debate about the Iran deal Obama even sunk down to the level of blaming Israel and American Jews for pushing the U.S. into the Iraq war, which was not only anti-Semitic but untrue as the Premier at the time Ariel Sharon warned Bush #43 not to invade Iraq because it would lead to Iran gaining power an influence in the region.

When Netanyahu was invited to speak to congress to oppose the Iran deal, it was the most liberal of Democrats such as Rep. John Lewis (D-Ga.), Rep. Jan Schakowsky (D-Ill.), Rep Charlie Rangel (D-NY), who blasted Blbi the loudest.

And of course there is vote for the  P5+1 deal which does little to prevent and eventual nuclear Iran, which was supported by congressional Democrats so strongly that those in the Senate filibustered, not even allowing an on the record vote.

Those are just the low-lights, a full rendering would require a much longer post.

Ever since the creation of the modern Israel in 1948, pro-Israel organizations have fought prevent support of the Jewish State from becoming a wedge issue, saying that it must always remain non-partisan. This strategy made sense when both parties supported of Israel. However as the actions of the past eight years, as well as the quantitive trends in Israel support have demonstrated, the reality is that the Republican Party is strongly pro-Israel, while the Democratic Party —well—not so much.

And for those who believe that things in the party will change now that Obama is out of office in another week, remember that the leading candidate for Chairman of the Democratic Party is, anti-Semitic, anti-Israel, pro-Lewis Farrakhan, Keith Ellison. In other words, Democratic Party support of Israel is likely to worsen.

Note: The cartoon at the top of this post was created by my good friend, 2x Pulitzer Prize winning cartoonist Michael Ramirez. If you don’t read him at his site Michaelpramirez.com, on Facebook, or on twitter @Ramireztoons you are doing yourself a great disservice he is by far the best in the business.