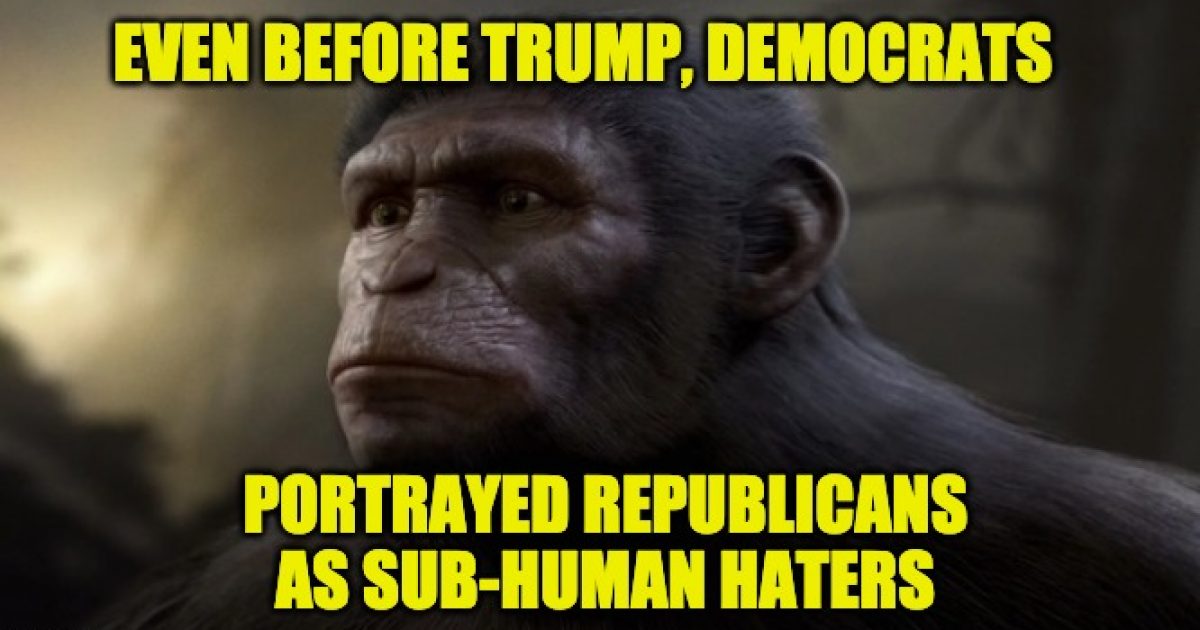 They won’t admit it, but the Trump rhetoric that spurred the Democratic Party and the mainstream media to start calling him and his supporters racist were said in June 2015, “So ladies and gentlemen…I am officially running… for president of the United States.”  But the Democratic Party started spewing anti-Republican hatred long before June 2015, and their attacks go way beyond one GOP politician.

Anti-Republican hatred has been spewing from the Democratic Party for as long as I can remember.  During the previous administration, anyone who disagreed with Barack Obama’s policies was called racist or other nasty names.  It hasn’t stopped, instead of engaging in political discussion, Democrats portray their Republican opposition as sub-human, narcissistic, greedy, rich, fat-cat, corporate chieftains and/or hillbilly, gun-toting, women-hating, religious fanatics, and racist xenophobes who hate Jews and want to reinstitute slavery–and those labels are used when the Dems are feeling friendly.

Allow me to provide some examples (there are lots more where the below came from):

There are so many other examples, GOP politicians like President Bush and Sarah Palin have been labeled as ignorant. When they oppose tax increases, Republicans are conducting a war on the poor. Republicans who opposed Obamacare wanted Seniors to die. And on and on.

For too long, the Democrats have refused to call Republicans “people with a different opinion as to how America should be run.”  Instead, the left calls GOPers names with the sole purpose of convincing voters Republicans are some sort of evil hate group.

Last night I spoke to a good friend telling him I was tired of unfairly labeled as a hater, and being personally attacked in ways I can’t bear to repeat. But in the end, there’s no choice. Either I continue or I walk away. Walking away would grant me relief from being labeled as a hater by online liberals and liberals in my family and community. And I wouldn’t have to spend so much time fighting for traffic or begging Facebook to take me out of their penalty box.

But I love this country too much,  get a thrill from researching and understanding the behind-the-scenes of American politics, and really enjoy sharing it with you, my readers while learning from your comments and emails. Along with all of that, I will never walk away because the one label I won’t ever let liberals pin on me is quitter.