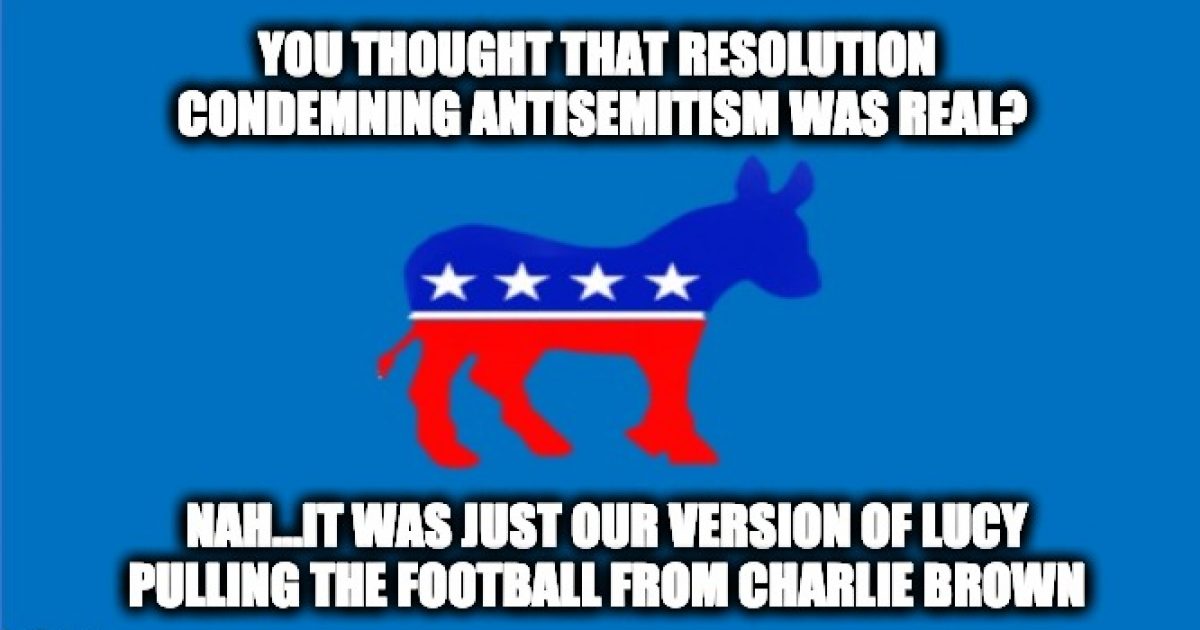 Rep. Omar’s latest statement about dual loyalty of Israel supporters motivated Democratic House leadership to put together a resolution condemning Antisemitism.  Over the past day, the House Democratic resolution rebuking Antisemitism which started out as worthless has removed any last vestige of having a meaning.

The original included historical references to Jews being accused of dual loyalty; including Alfred Dreyfuss, Leo Frank, and Islamophobic charges after 9/11. But not once did it condemn Rep. Ilhan Omar or the strain of Jew-hatred in the Democratic Party that began way before she was elected. For example, in 2003 former Congressman James Moran (D-VA.) made the false charge that the leaders of America’s Jewish community sent America into war in Iraq to benefit Israel, a charge that Democratic Party President Barack Obama repeated in 2015

What the Democrats are now proposing now is masking Antisemitism by with a resolution which includes every other kind of hatred in America. They are making the resolution more vacuous to hide the cancer of Antisemitism that has overtaken the Democratic Party.

The controversy surrounding Rep. Omar and the original Democratic resolution has nothing to do with the Palestinians or Israel, it’s about hatred of Jews.  Accusing Jews of dual loyalty, or saying Jewish organizations purchase the loyalty of government, are anti-Semitic canards that have been around since the days of “The Protocols of the Elders of Zion.” Support of BDS is just as anti-Semitic only more recent

But, mainstream media anchors cover up for Omar by calling her comments anti-Israel. The New York Times has joined in using the headline “Ilhan Omar’s Latest Remarks on Israel Draw Criticism.” The Times reaction is not surprising as during World War II the same newspaper buried stories about the Holocaust.

The Democratic Party opponents of the Antisemitism bill are fighting it with “whataboutism.”  They keep coming up with false examples of Republican antisemitism. They are bringing up Jim Jordan’s use of a $ as the first letter of Tom Steyer’s last name.  But Steyer is a practicing Episcopalian, and the $ was a reference to Steyer spending $40 million to impeach Trump. Dems are also raising criticism of George Soros as an example of GOP Antisemitism. But George Soros is a real-life Dr. Evil, the only difference is that he’s more dangerous and not as funny. Soros has disrupted Democracy and Capitalism across the world. And despite his Jewish birth, George Soros has never been considered a friend of the Jewish People or the Jewish State of Israel. They also bring up old accusation of Steve Bannon, a senior adviser to Trump at the beginning of his administration, being an anti-Semite. When that accusation was first made two years ago, I did extensive research, but there was nothing, no anti-Semitic incidents (no racist or white supremacist incidents either),

UPDATE: Vote on resolution condemning anti-Semitism may be pushed back. Congressional Black Caucus and Congressional Progressive Caucus pressing for a delay. https://t.co/EyV8Xm1v0p

Apparently, the internal forces fighting the Antisemitism decree are also the two largest anti-Semitic groups within the Democratic Caucus.

It was just last year when it was discovered that anti-Semitic Louis Farrakhan had a relationship with 21 members of the Congressional Black Caucus. CBC members such as James Clyburn (SC-6) who said that he was “not bothered in the least bit” by the Jewish objections to Farrakahn.  Danny Davis (Ill-7)  “Davis went on the record twice to defend and praise Farrakhan.” He called Farrakhan an “outstanding human being,” and says he regularly visits Farrakhan including at home. Davis has also said he wasn’t bothered by Farrakhan’s answer to “the Jewish question.” In other words, his Antisemitism. Hank Johnson (D-GA) called Jews termites before Farrakhan ever did, and Maxine Waters believes that AIPAC has too much power over congress.

Leaving CBC meeting, members formed a circle around @IlhanMN and Marcia Fudge literally stuck her arm out to prevent reporters from asking her questions.

Then a few members hugged Omar, including Al Lawson.

With the watering down of the Antisemitism resolution, the Democrats are abandoning any semblance of a moral backbone.

As to their excuse that there are other kinds of hatred in Congress they are correct, there is anti-Muslim hatred and anti-Black racism in Congress, but any indication of that bigotry is immediately condemned whether true or not. Ask Rep. Steven King about his committee assignments, or remember that during the Bush and Obama administrations we weren’t allowed to link Islamist radicals with terrorism even though their version of Islam was the motivating factor behind the terror.  Heck, during the Obama administration, any criticism of the President’s policies were greeted with condemnations of racism from Democrats. But Antisemitism in Congress, specifically in the Democratic party has been ignored. Antisemitism in the administration of Barack Obama has been overlooked.  The Democratic Party’s platform change, eliminating the plank that would preserve Israel as a Jewish State is ignored even though the Pope and the State Department each stated that any movement to annihilate the Jews right to a state is anti-Semitic.

Note: My friend Lori Lowenthal Marcus has a different perspective than the above on the Democrats giant step backward from rebuking Antisemitism. She’s written a great article at her new writing home SaraACarter.com. I strongly recommend you read it, by clicking here  –> Dems’ Two-Step Dilution of Omar Rebuke for Antisemitism